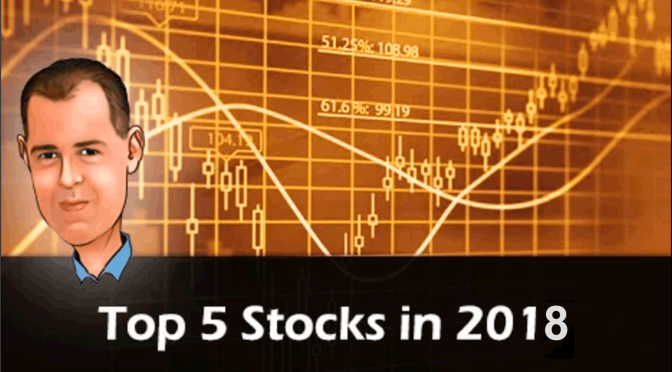 The much anticipated Top 5 Stocks/Themes for 2018 Webinar will be out by January 1st. I say 'much anticipated' only because this year I have received quite a few emails, along with messages on social media, around what stocks are going to be included and when it will be available.

[Update: Here is the link for the Webinar: https://www.optionmillionaires.com/top-5-stocks-2018-webinar/ ]

If there is one area in the markets I feel I can truly hang my hat on and call my own, it is finding stocks before the herd - seeing a gem when everyone else sees a dirty rock. Hopefully that continues in 2018. There is nothing like the feeling of stumbling on something big and undiscovered while doing some due diligence. The icing on the cake is seeing it come to fruition.

This year was just crazy:

$MB was the first one to soar out of the gate in 2017 : https://www.optionmillionaires.com/mindbody-mb-rallying-start-2017/

$WIX was next, going from unheard of to the talk of social media. Being in before the herd paid nicely. My thoughts : https://www.optionmillionaires.com/update-wix-com-wix/

And a few of the trades:

I actually became bullish on ALGN  on May 4th : https://www.optionmillionaires.com/quick-thoughs-align-tech-algn-trade/ and here : https://www.optionmillionaires.com/bull-case-align-technologies-algn/ . Similar to $WIX there was zero chatter on ALGN when I started adding calls. A few months later it was the talk of the town and being added to the S&P 500.

$CUTR was a stock I had on my small list for one of my Top 5 to start the year but others made the cut -  it was trading at $17.35 at the time and hit $48.90 last week. It has provided some great opportunities, here was one of them:

And then there is TRUP, a stock I think tests $50 and higher in 2018. My first thoughts on Twitter:

And some of the trades:

And last, but not least, my predictions on Stocktwits:

Seems the higher Bitcoin goes, the more experts there are(and the higher the targets). Where were they to start the year, or back in 2013 : https://www.optionmillionaires.com/option-traders-take-bitcoin/

CMG finally broke through $300. It's a name I have been bearish on for quite sometime: https://www.optionmillionaires.com/chipotle-stock-going-puke-cmg/ (have recently switched sides). Funny how sentiment changes. As it dropped from $700 many remained bullish. Even in the $300s and $400s.. then it breaks $300 and everyone is a bear and has been one since $700:

Missed this one by a few percent. For what it is worth, MB is one to watch into the start of 2018 for another resolution induced surge:

Of course there are always losers and I get plenty wrong on the prediction side. It took SHAK all the way until October to start breaking out. And RARE fell after having some bad luck with some of their data. I also expected a correction this year, that China stocks would be weak, the US Dollar would soar to $110, and TWTR would be acquired. But at the end of the day just need to have profits exceed the losses, and that happens quite often when calls/puts head over a few hundred percent. The 'hold' is the most important aspect to attain that outcome and hardest thing to do when trading high risk, out-of-the-money options. You can feel like the king of the world selling a position for 100%, only to see it run 1000%+ 2 hours later. Repeat this many times over the course of a year and that equates to quite a bit of profits missed... and profits is the name of the game.

Some things to do to help with the 'hold' is tuning out the noise:

And tuning out the Fear Mongering Bears:

Why I Hate Fear Mongering Bears

Looking forward to 2018, and can't wait to share my thoughts for the new year. Once again, the 2018 Webinar will be up by December 28th for Gold and above members. For those looking to check out the OM Community, we have some extended trials into the end of the year. Send an email to optionmillionaires@gmail.com with 'End of Year Trial' in header for details.