For some reason, every time I used to hear the word "Bitcoin" I thought of fraud.  I'm not sure exactly why, but I would guess it had something to do with all the negative press I have seen over the past year on the crypto-currency. It seemed to me that Bitcoin was destined to only be used by by drug dealers and those looking to launder money. It's a shame I didn't try harder to look past what the press was spewing out, as I missed out on an opportunity to join the Bitcoin craze early. But as they say; "better late than never."

It wasn't until the November 19th hearing on Bitcoin that I really started digging into the cryptop-currency and began to like what I saw. One aspect was the extremely speculative nature of Bitcoin. I'm an option trader and I'm risky by nature - taking positions that can either go to zero or run up a few hundred percent in a few hours - so being speculative is what I do. Another aspect about  was most folks continue to feel how I originally felt about the currency, meaning they're skeptical about it ever becoming anything more than a pump and dump. Both of these attributes are ones I look for when making my option trades: they're usually extremely high-risk and I'm normally entering a position before the herd while folks are either skeptical on a stock or haven't heard of it. Turns out, Bitcoin was right up my alley. Here's why:

The more I dig into Bitcoin, the more I believe this is a boom or bust scenario.

The Boom Scenario: Bitcoin is adopted around the world as a legitimate currency, governments also don't make Bitcoin illegal, fraud and negative press diminish, and retailers allow it as a form of payment etc.

With a finite supply and increasing demand, the boom scenario could be extremely lucrative. Take, for instance, the U.S. dollar and euro, both having over $1.2 trillion in circulation. Using the 11 million Bitcoins in circulation and assuming it takes on a small role as a global currency, a $30k value per coin only puts the currency at $330 billion. Now imagine if Bitcoin takes a much larger role. Then we can discuss higher valuations. Folks are also starting to talk about Bitcoin replacing some of gold's role as an inflation hedge because the coin's limited supply is deflationary in nature, which is another piece that could add more value down the road.

Obviously, this is a very quick summary of my thoughts on Bitcoin and I'll try to deliver much more in the coming weeks and months. I did purchase my first coins in the $800s two weeks back and will look to hold those through the Boom or the Bust.

I'll leave you with two important charts, one being the amount of searches on Google for Bitcoin, and the other being the actual price of Bitcoin. Now, just imagine what could happen if Bitcoin went mainstream. 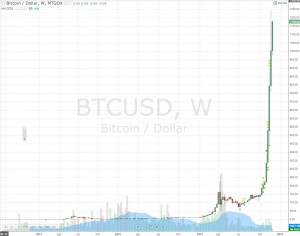 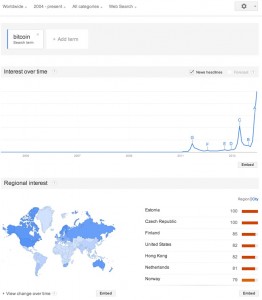