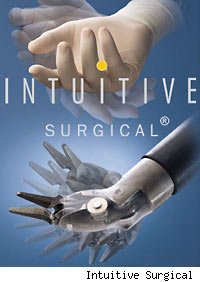 Intuitive Surgical (ISRG)  was one of my top 5 stocks I was watching heading into 2014. At the time Intuitive Surgical (ISRG) was trading at 374.79(Dec 26th). Since that time, the stock has risen $74.72 or nearly 20%. A pretty large move, and one that had analysts downgrading the stock yesterday based on the move and the stocks valuation. Normally I would tend to agree, but not with this stock, and not in this market.

Intuitive Surgical(ISRG)  was the 6th worst performer on the S&P in 2013, mainly from negative press around and FDA probe into the companies product which became a self-fulfilling prophecy as growth slowed towards the end of 2013 on those possible concerns.

A new year is a great time to turn a new leaf, and I continue to think Intuitive Surgical (ISRG) will shine in 2014. Intuitive Surgical just landed a $142 million dollar contract with the Government and the Department of Veterans Affairs. The deal in itself is over 6% of the companies estimated revenues for 2014, but I think a government agency continuing to adopt  the companies product is bullish in itself. 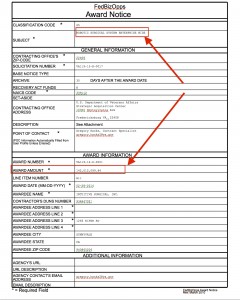 Back on February 14th, Ernst & Young announced they were not signing on to be the Auditor for the company in 2014. Of course, all the bears were quick to paint the news in a negative light, which is to be expected. But this morning, the company announced a replacement, which should help put some wind at the back of the stock today.

The company has a flawless balance sheet, with over $2.7 billion in cash and equivalents, ZERO DEBT, and has another $1.0 billion left for share buybacks.

The chart paints a great picture as well, as the stock recently broke and held above a resistance area at $443.99: 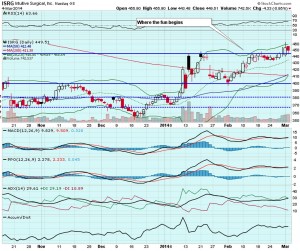 Moving further out, you can see there is another resistance area at $474.80, which could come into play very soon: 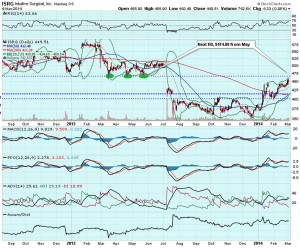 Trading volume has also picked up over the last three sessions, and there continues to be bullish bets being places on the stocks performance via calls. Some of which are my own.

Despite the big move in Intuitive Surgical (ISRG)  over the past few months, I think there is plenty of upside left , especially on a break above $474, and have bet on a larger move via March calls.