Nevro ( $NVRO ) is a stock that hit my radar at the end of the 2015 after doing a scan on growth stocks. Within 10 minutes of doing some due diligence, I felt it had some big upside potential and  put it as one of my Top 5 favorite stocks for 2016 ( https://www.optionmillionaires.com/top-5-stocksthemes-2016-webinar/ )-- for what it's worth, two of the stocks on that list have already been bought out in 2016. Then in May, with the stock sitting at $67, I outlined my bull case on why I thought it would rally at least 30% from that level: https://www.optionmillionaires.com/bull-case-nevro-nvro/. It's been three months since that post,  and sure enough Nevro ( $NVRO ) is up 45% since then, closing at $97.20 today, which is another all-time high close. Time to pat myself on the back, lock in profits, and move on... or is it? If you had asked me at the start of the year what I would have done if Nevro ( $NVRO ) hit $95, I would have said, 'Sell, sell, sell!'. But the companies Q2  earnings report has me thinking the stock will continue it's march higher, testing at least $105 in the coming weeks. Here are some reasons why:

The company announced strong Q2 results on August 8th, reporting $55.4 million in revenue vs. expectations of $45 million - a 385% increase over the previous year. They also raised their FY'16 revenue guidance to $210-$220 million from $175-185 million. It was the third time they raised their guidance in 2016, and the 9th time they have raised guidance  since their IPO 22 months ago. Here is the companies revenue guidance since January of 2016: 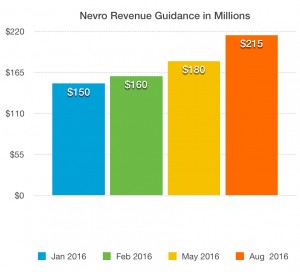 Nevro ( $NVRO ) has beat earnings and raised guidance in every single quarter they have reported as a public company. If Nevro ( $NVRO ) had a middle name, it would be growth, and I think it continues. The company expects to have at least 160 sales reps by the end of 2016 - with no cap on hiring above that level - each averaging $1.3-1.5 million in revenue. That puts a fully staffed Nevro( $NVRO ) sales team doing revenue between $208-$240 mil. They ended  Q2  with 140 reps, adding 27 from Q1. To me, the issue with Nevro ( $NVRO ) growth is not a production one, or a product quality one... its a marketing one. As doctors and physicians become aware of the solution, sales will grow -  to become aware they need sales reps. It  is not a reach to think Nevro ( $NVRO)  could have 160+ reps by the end of Q3. An upside to the rep headcount or to rep production will mean more revenue, more guidance raises, and a higher stock price.

It's always good to go with a quality product or service when one can afford it. But it is of utmost importance in the healthcare field, where one's well being is in the hands of a treatment or drug. Settle for a second rate product or go with the 'Best of Breed'? The answer is pretty simple and is another reason why I love Nevro ( $NVRO). The company received FDA approval in May of 2015 and was given superiority labeling. In a sign of desperation that same month, Boston Scientific ($BSX) challenged a key Nevro( $NVRO ) patent, which Nevro( $NVRO ) won in December, further validating the product. Since their U.S. launch, the company has taken at least 11% market share of the $1.5 bil SCS(spine cord stimulation) space. and is likely to continue to steal market share in a growing market. Best of Breed product, grabbing market share at a rapid pace, in a growing sector... more reasons why I think the stock is headed higher.

Since the companies IPO in late 2014, the stock has seen short interest rise as investors doubted the companies ability to get approval in the United States for their Senza Spinal Cord Stimulation (SCS) system. After getting approval, they doubted the company could compete with entrenched brands in the United States and grow market share. Short interest continued to rise and now stands at over 24% of the float.  Any bear thesis one could have on the company has been proven wrong, with only one thing left for bears... hope - hope that investors take profits. A great opportunity for that to happen would have been after the 15% move higher on the strong Q2 report. Yet the reverse has happened, with investors continuing to bid up shares. Eventually it will be time to throw in the towel and start covering short positions - something  likely to happen sooner rather than later and will provide fuel for the stock to move up.

New growth companies tend to be hard to value. At first glance, a company like Nevro ( $NVRO), which is losing money and trading at over 15x's 2016 revenues, looks overvalued. But when you peel back the onion, you see a company growing/taking share at an incredible rate and executing at an extremely high level. If history is any indicator of the future, I would expect Nevro ( $NVRO) to continue to defy the odds, and beat expectations. New highs usually beget new highs when it comes to growth stocks. I would not be surprised to see Nevro ( $NVRO) trading at $110 or higher in the coming weeks. Into 2017 I can see $NVRO trading up to $150, based on 50%+ revenue growth. As a kicker, the company has $290 million in cash or $11 per share.

And was able to lock some gains in at $9.20 after earnings:

At some point in the next two weeks, I will close the rest of my August calls.