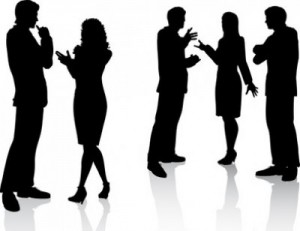 No, it's not a new music group, nor a new T.V  show, or a  new virus brought over from the Middle East. It's the sensationalism being being used by financial media sites to lure in viewers... or should I say "eyeballs".  My words? Nope, those are the words of a 13-year veteran of online financial media throwing in the towel. Why? I'll let you hear it from the horses mouth:

“I realized the model was broken a few years ago,” Mr. Harrison said in an interview with MoneyBeat. “The Internet is the most deflationary invention of all time,” something that’s great for consumers, but not for producers, he said. It’s cut prices across a range of industries, but for media, it’s created an cutthroat environment where outlets are reduced to “pandering for page views.

"scramble to capture online “eyeballs” online has created a competition with a now-familiar set of tools: “click-bait” posts that have screaming, sensationalist headlines, posts filled with numbered lists and slideshows and other gimmicks to generate clicks.

After reading that, you may wonder why I would even bother writing something. Heck, maybe a change in title to "The Walking DEAD" may entice more 'eyeballs'. But quite honestly, the few that read this post, are probably the ones who have it right to begin with. They already have  tuned out the noise.

Noise? Yes, that is what the financial media has been spewing for the last 5 years. We have been writing about it for quite sometime here at OptionMillionaires(one example here) Is someone more apt to click an article titled ,"The DOW is going to zero in 2 years" or "We are going to melt  5% higher in 2014 in a complacent trade"... I'll let you ponder that question.

This past week has been one of the better examples of the "noise'. We continue to have the overhang of Ukraine/Russia tensions, the S&P and DOW right near all-time highs, the "Tepper Tantrum', while also in the midst of a momentum stock meltdown. Add to that a SmallCap correction and A Treasury/Bond market that has everyone talking, and you now have enough noise to distract even the most bullish of bulls.

Should Bulls be worried? Is it different this time? Well Yes and No. I dont think Bulls should be worried. If you haven't already, read my piece(s) on why I think this market continues to head higher[Part I / Part II] And yes ,it is different this time, as the media is more concerned with clicks, views, eyeballs, and follows, then anything else. Worse yet, are the Doom and Gloomers ,who are , and will continue to, spew fear inducing quotes and predictions. Eventually they will be right, but for now, they are just noise.

Small Cap divergence with the S&P and DOW? Better sell everything you have and put it under the mattress. Momentum stock sell-off caused serious market damage! Get the bomb shelter ready.!

I think you get where I am going with this.

I am not saying don't position yourself for possible downside risks. But I am saying, every headline over the past 5 years has been there to draw eyeballs. If your able to tune out the noise, then you have found some profitable trades this week, and over the past few years. If not, then just wait for the day when the Doom and Gloomers have fallen silent, and that maybe the time to finally go short... and that time, maybe the most profitable yet!

One thought on “The Noise”