Amedysis ( $AMED ) was on fire today, finishing up 8.72% and making a new 52 week closing  high of $31.67. The large move was mostly inspired by an upgrade over at Suntrust, who raised their price target on the stock to $36 from $31, and moved their rating up to Buy from Neutral. The stock has  mostly struggled in 2015, but today's swing puts the stock up 7.9% on the year, a gain that outpaces all the indexes year-to-date. Not too bad so far, considering it was up 116% in 2014... but i think there is more to come, and the stock will close the year above $40, which is a 30% move from it's current price ( A target I put on the stock during my Top 5 Stocks for 2015 Webinar back in December.)

Here are some of the reasons why:

These are just a few of the reasons why I like this stock even after hitting 52 week highs today, and despite the huge move in 2014. It seems more analysts are starting to believe in the story, and think the Suntrust Upgrade today, will be just one of many over the next few months.

Think the stock trades into the $35 area in the coming weeks and added more June $33 calls today to take advantage of that move: 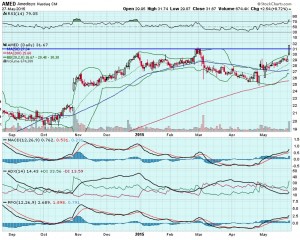