If you are long Chipotle Mexican Grill ($CMG) and still follow me on Twitter or Stocktwits, you deserve an award(shoot us an email for some free Guac and Chips at your local Chipotle).I have been quite negative on the name since at least October, and my commentary could be considered borderline belligerent. But it is only because I think Chipotle Mexican Grill ($CMG) is severely overvalued at the current share price, will fall under $400, and can’t fathom any scenario that puts the stock back over $530 in the next few weeks besides being taken private. Maybe I am crazy, but I think one needs to be to trade Stock Options. For what it’s worth, I actually love the company - it is one of the best growth stories over the past 10 years - but I am a trader. The stock has already been very good to me, and I was able to make some nice gains when the stock went haywire in November : https://www.optionmillionaires.com/e-coli-enhanced-chipotle-put-options-go-haywire/. I also shared my thoughts on the stock at the end December when it was trading around $500, two weeks later the stock broke under $400 before bouncing: https://www.optionmillionaires.com/chipotle-mexican-grill-cmg-sick/. And I shared some more comments after they reported their fourth quarter and year end results on February 2nd of this year : https://www.optionmillionaires.com/chipotle-mexican-grill-hope-based-analysts/

Here are a few more reasons why I believe the selling in Chipotle Mexican Grill ($CMG) is not finished, and the stock breaks back under $400:

At it’s highs in August, Chipotle Mexican Grill ($CMG) stock had gained over 1,500% from it’s IPO price in 2006. Its astronomical rise, from a few locations in1998 to over 2000 today, have many investors looking for the next Chipotle. The brand is synonymous with healthy and fresh ingredients, and has/had an extremely loyal customer base. The outbreak has changed that. A quick glance of social media and Google paints a picture of a customer - and future customer base - now worried about getting sick, and a brand that may now be more synonymous with e.Coli and Norovirus then the healthy image they used to portray:

You also have a CEO and management team who have a sense of arrogance about them, and who were also late to react to the outbreaks in the summer on the West Coast. It almost seemed to me that they thought this would all just go away, and things would go on as they always had. By the time they realized how serious the situation was, it was too late again. They scrambled to put full page ads in newspapers to apologize, and the Founder/CEO Steve Ells went on the Today Show and CNBC to let the public know, ‘There is no E coli in Chipotle today’. One week later the CDC announced 5 more cases. The Brand is tarnished…and it seems right now no-one is looking for the next Chipotle.

Huge growth was one of the main drivers of Chipotle Mexican Grill’s ($CMG) soaring stock price over the past 6 years. When a company is growing top-line 20%+ on a year-over-year basis, investors tend to overlook other areas. But when it starts to slow, those areas start to come under the microscope and things like SG&A start to matter. The irony in the outbreak at Chipotle, is that many would assume the companies growth started slowing after the outbreak. The reality is, growth was already starting to slow in 2015 and had peaked in the 3Q of 2014 as seen below:

The company does not give a breakdown between new and existing locations, so one can only guess what the comparable sales would be without the 229 new locations added in 2015 - they average around $2.4 mil in annual revenues. Based on the update issued on March 8th, comparable sales were trending down 30% with three weeks left in first quarter, so expect the chart above to look even more dreary after Chipotle announces earnings on April 26th. Huge growth drove the stock to highs, negative growth will push the stock to lows.

Seems when someone has a lot of something, they take it for granted. I think this is the case with Chipotle and their cash horde… or at least what’s left of it. Since the CDC investigation in October, Chipotle has been doing what any rationale person or business would do during a crisis, spend all their free cash buying back shares, increasing payroll regardless of sales trends, spending 400%+ more on promotional/advertising activity, and giving crap away for free: 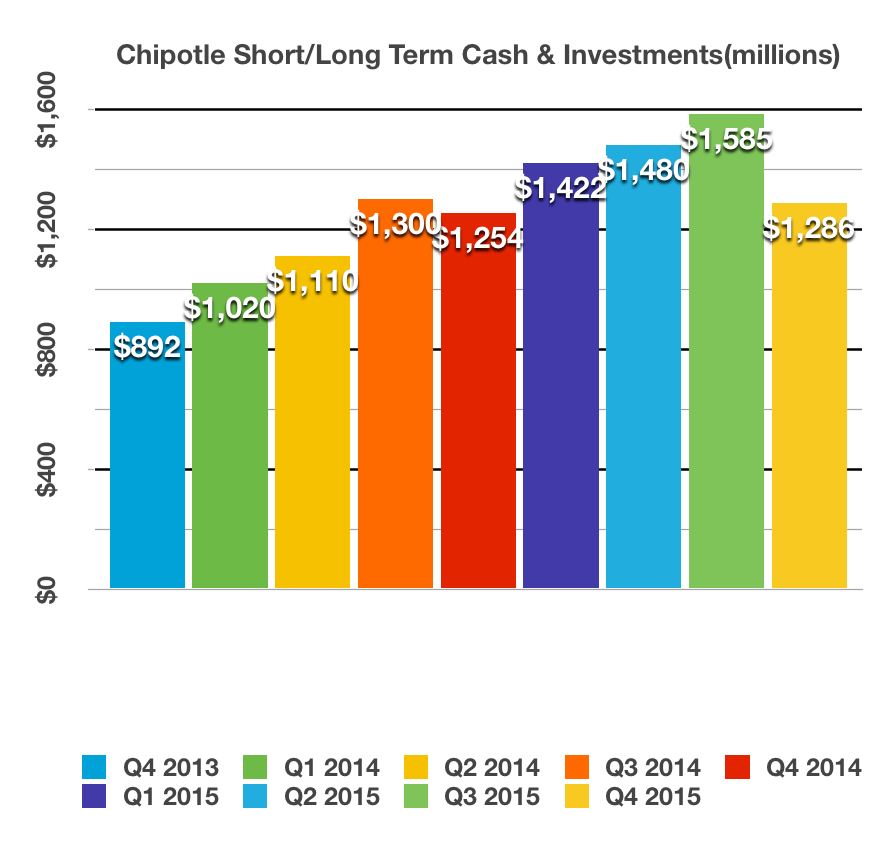 Based on my estimates, since the outbreak Chipotle has blown through at least half their cash horde, and has about $622 million left in long-term investments(Treasuries). Not only that, they are continuing with their plans to open another 220-235 stores in 2016 at an average cost of $800k per location($188 million cost). Now I wouldn’t be as concerned if Chipotle was earning money like they were  accustomed to, but that is not the case in the current environment. Chipotle has already said they are going to lose at least $1 per share in Q1, their first  loss ever. There is limited visibility, so it’s quite possible they will lose money in Q2  as well, and the Q1  loss maybe more then the guidance. My point is, they are losing money, yet continue to spend like the past and assume things will get back to normal. What if they don’t? Easy to pay $750 for a share of Chipotle when they are growing revenue 20% and have $1.5 billion in cash with zero debt. But now?

I could go on and on, discussing how margins will never be the same or return to  historical highs. How they have lawsuits pending from former employees and an unresolved criminal investigation by the California DA, or how the CEO said 5-7% of previous customers will never return, or the effect one location closing for a day had on the entire chains sales in March. But I think the above is enough to warrant a much lower share price.

The stock trades 4x’s revenues, trades at 115x’s it’s current earnings, and has declining growth. If trends start improve, then yes, the stock may start to head back to $550 and longer term can return to the $700s. But for now, it heads down.

I currently have puts and will look to add or close my position at anytime.