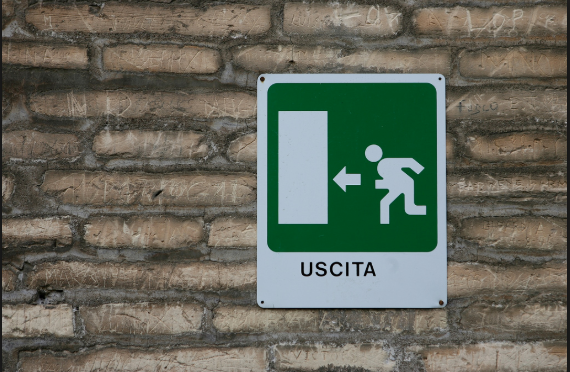 Grexit, Brexit, and now we have........what have they come up with for Italy? Just plain old exit?   The looming Italian exit from the Euro remains without a moniker, and yet its going to be so huge.  This will be the final nail in the global economic recovery coffin.  A nail that will cost 25% more after tariffs.

Italy is leaving the Euro.  We know is going to happen...much  like when Greece left a few years ago....  Yes.   That was terrible.   Italy is now being called the "Next Greece", but much worse.   Much worse? That's almost a compliment!

So you mean Italy is going to get bailed out like Greece and the stock market in the United States is going to soar to fresh never seen before levels?  That's what happened with Greece. If Italy is going to be much worse, than we should expect even higher asset prices.

This news is nothing new.  We've been dealing with it for years!  How about the European Debt Crisis?   The entire Eurozone was going to implode.

And that nasty late afternoon flash crash!     Remember the following weekend, with asset prices around the globe plunging,  the Europeans met and launched what was called at the time a Bazooka.   Futures that Sunday night were almost limit up.  Crisis averted?  Can kicked?  Whatever you want to call it, the stock market has gone on another 7 years making relentless record highs, with a the ECB bazooka loaded and ready when needed.    Asset prices won. And guess what?

Asset prices won after the Greek Tragedy as well.  Here we are 7 years later with another European Drama.    Yeah that's right, this Italian drama is really just  ACT 12 Scene 7.  The script is still not finished, but the title "Higher Asset Prices" has been in place since the financial crisis in 2008/2009.

Just Two years ago an Italian Banking Crisis was going to crush the markets.  Yes.... the Italians were ready to take down the global economy two years ago....  It was going to be 'Huger' than anything we've ever seen before...

and after that "crisis' passed, The stock market  ended up lower just one month over the next year and a half.   If you haven't taken Central Banking as your second language you would have never known that the term  Banking Crisis = Buy The Stock Market.    Since 2009 any negative term = buy the stock market.  What are the odds today's Italian excuse to sell if any different?

This market has had so many headwinds.  So many reasons to doubt it.  So many headlines.   What are the odds that this one is finally it?  Certainly today... we are one day closer to the next crisis.  The next collapse in asset prices.   However that one day could be in 2018 or 2028?   Each of these Brexits,  Grexits, and Exits feels like its going to be the 'one'.

The VIX spikes 30%.  The fearful headlines dominate the financial media.  And then... just a few weeks later, the stock market is back heading toward new record highs.

And while each of these reasons to sell might feel different, the end result down the road is the same.

Just another named sell off.