Back in early March, I added some more thoughts on where I thought the market was headed, and made my case on why I thought the $SPY would hit $200 before the year is   out. Since that time the S&P and DOW have hit record highs, while the Nasdaq and Russell 2000 have  found themselves under pressure, with the Russell 2000 down over 8% from it's highs and the Nasdaq pulling back nearly 10%, close to correction territory. It's easy at times, to get feared into changing your position - to go from bull to bear, back to bull, and back to bear again - but I have not. The pullback in Biotechs and the momentum stocks have tested my resolve, and at points, tested my conviction, but I remain steadfast on my bullish stance for 2014, and continue to do so, despite what  has been said Print, T.V., and Social Media.

As an option trader, I dont make a trade based on anything other than conviction and belief in my bull or bear thesis. "I DONT KNOW "does not fit in my trading style, despite what some of the market pundits would say is an acceptable practice. I may be wrong, but I will continue to find reason and rationale in a move in the market, and thats what I will try do as I continue to paint my bull case on the S&P.

First, I will try to explain the pending headwinds in the current market: The Biotech/Momo Sell-off, the rally in Treasuries and Bonds, and the pullback in small caps - then I will explain a few reasons why I continue to think this market is headed higher: ECB , the VIX, and Merger & Acquisitions.

It was right after I gave my last update on the S&P, that the biotech and high growth tech sector started to show weakness, after a torrid run in 2013 and the start of 2014. Within those sectors, high growth stocks, with lofty valuations and high P/E ratios were sold off indiscriminately. Why? Because we are in a tech bubble dammit! Or at least thats what most would have you believe. Heck, Barron's has been calling for a bubble in tech for sometime and were finally vindicated: 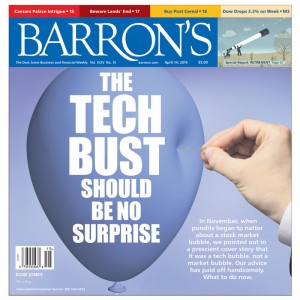 They have been waving the red flags since July, good thing I was paying attention: 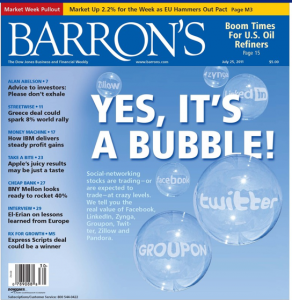 In actuality, despite the recent bloodbath in tech, most of the supposed 'Bubble" tech stocks like FaceBook ($FB +122%), Tesla ($TSLA+148%), Zillow($Z+82.31%),NFLX ($NFLX+61.64%), and Amazon ($AMZN+12.89%) are still up substantially over the past 12 months. Ironically enough, most of the above listed stocks have also been negatively profiled on the front cover of Barron's and have been given the proverbial 'Madden Football" cover curse...in reverse of course. And that's not a bash on Barron's, they are part of my reading ritual every saturday morning, just don't agree with their take on tech.

As I look for more clarity on the momo pullback, I look no further then a former JPM analyst: http://www.businessinsider.com/tom-lee-predicts-broadening-growth-bad-for-growth-stocks-2014-5 . He may seem quite bullish in his remarks, but he has been eerily accurate in his remarks and predictions made at the end of 2013.

Another piece I think adds light , is one making sense of the pullback in Biotech from the New Yorker: http://www.newyorker.com/talk/financial/2014/04/28/140428ta_talk_surowiecki I am sure there are many other reasons out there for the recent momo madness, but think the concerns over the overall market being severely damaged from this pullback are overblown. And actually think it will add fuel for further upside over the next few months(more on that later)

Wait a second, the Great Taper of 2014 has begun and yields are going lower? The Federal Reserve is cutting back on purchases and Treasury prices are going up? How is this possible? It has stunned the investment community and it has become quite interesting to see what folks are saying are the possible causes. Ukraine and Russia tensions? Flight to safety trade with the market at all-time highs and set for a serious correction. Heck, there are some among us who even cite the recent tech sell-off as the catalyst...oh my. I think the answer is somewhat simple, and can account for most of the rise in treasuries in 2014. Pensions. Here is a great clip from Barron's over the weekend explaining it in detail:

Part of the problem is that long-bond yields already have priced in bigger short-term rate hikes than are likely. Paraphrasing the slogan of former New York gubernatorial candidate Jimmy McMillan -- "The rent is too damn high!" -- Cutwater Asset Management's chief executive officer, Cliff Corso, says that the yield curve's slope is too steep.

That is, long-term interest rates are too far above short-term rates, given the Fed's likely course of future increases in the federal-funds rate target -- which has been 0%-0.25% since December 2008, at the depths of the financial crisis. In congressional testimony last week, Fed Chair Janet Yellen gave no indication that the central bank would deviate from its current course, which means the first fed-funds rate hike likely is at least a year away.

As a result, yields on 10- and 30-year Treasuries have been moving lower -- in direct contradiction to predictions by Wall Street's best and brightest. Compared with European government obligations, the U.S. is a relative bargain, with the 10-year note at 2.60%. That compares with (how should I put this?) the somewhat less creditworthy obligations of Spain and Italy, whose yields pierced 3% on the downside. German 10-year bunds, meanwhile, yield just 1.50% and the European Central Bank signaled last week that it is prepared to ease further.

Meanwhile, Corso points to "The Other Great Rotation," which is driving money into long bonds. He estimates that U.S. public and private pension plans have more than $6 trillion in assets, generally invested in something resembling a mix of 60% stocks and 40% bonds. With the appreciation of equities in 2013's 30% bull market, the retirement funds may be shifting 10% of their asset to bonds from stocks. That's some $600 billion of demand -- equal to 100% of the supply of Treasuries due over 10 years in the public's hands. No wonder investment-grade corporate bonds find such ready buyers, whom companies exploit to fund share buybacks.

That's some $600 billion of demand - equal to 100% of the supply of Treasuries due over 10 years in the public's hands.  - I think that can explain a lot of what we have been seeing in the bond market in 2014. This sentiment is also somewhat echoed by Jeffery Gundlach.

Again, not saying there are not other reasons for the rise in the Bond market, but feel more comfortable about Treasuries rising, and won't get skittish as they continue to ramp higher in 2014.

The Pullback in Small Caps

It's been said that the small caps usually lead a market higher or lower, and the fall of the Russell 2000($IWM: Small Cap ETF) has investors on edge. I would not disagree with that argument, as traditionally Small Cap stocks sport loftier P/E ratio's than the Big Cap stocks, and usually investors flee from those first. But I don't think it's cause for concern. The Russell 2000 is historically a more volatile index, and has had intra-year corrections of more than 10% most years sans 2013. So despite the continued chatter of the $IWM foreboding a future sell-off in the DOW and S&P, I think it's just normal profit taking, and will regain it's luster. Russell 2000 is typically  experiences 50-100% more volatility than the S&P(1 = 100%)

The ECB? Europe is going to provide the next leg for the equity markets? I think so. The first leg in this current bull market started with the first round of Q.E. in the U.S., which we were talking about before it was a household term. One could make an argument that fuel for the next leg in this bull market was provided by Japan and Abenomics.The next leg to this market? Draghi and the ECB, as comments from their last meeting hint at a possible move in June to put rates in the negative. They did not rule out other accommodative measures to stoke extremely low inflation that threatens future growth. I do not think European stocks will rally over 100% in 6 months like they did in Japan from the end of 2012 to May 2013. But I do think it will provide a lift, and US. equities will get a boost as well.

A reader of this blog, would know we have been advocates of a VIX that has been fixed.(read here). I wouldn't be surprised if the VIX was not an instrument devised by the plunge-protection team to save the market from crashes... at least when a president in favor is in office. But it has been useful in 2014 for keeping me somewhat calm during market sell-offs, as the VIX has remained under 20 for the majority of the first 5 months, and at times, seems unattached to market sentiment... or so one would think. A reading of 12, which we reached today, implies a 3.46%  expected monthy volatility in the S&P. This is surely not foretelling a market crash, if anything it is telling folks to relax. Of course, market complacency can be construed as bearish, but over the past 5 years, what hasn't wrongly been construed as bearish? For now it's "In VIX I trust".

We have an environment of cheap money, tech  names down 30%-40% from their recent highs , and companies looking for growth. This alone should help put a floor in some of the niche companies that have come under pressure as of late like Netflix ($NFLX), Workday($WDAY), and Splunk (SPLK). And here  is another great clip from Barron's explaining the amount of M&A to start 2014:

According to International Strategy & Investment Group, there have been 160 transactions, mostly mergers and acquisitions, totaling almost $1.5 trillion in the past three months, signaling an abundance of money looking to be put to work. "This could be the start of a signature event for this business cycle," ISI writes.

Just think this is another piece that pushes the S&P over the next few months.

In conclusion, the S&P and DOW sit right near all-time highs as I write this - over the past few weeks and months more bullish market 'experts' have either went neutral or warned of an impending correction or crash. I think the reasons for the market to rise outweigh the reasons to sell, and think the S&P continues to climb in 2014.