The VIX in simplest terms is the price people are willing to pay for a call or put option on the S&P 500.    The higher the price the higher the VIX goes.  Most people signify a rise in the VIX as a sign that the market is about to fall off a cliff, but that isn't entirely true.  While a rise in the VIX in the past has been a sign of future turmoil in the markets, much like we saw in late 2008 and 2009, if market participants are expecting a big move higher they will be less likely to write calls without first receiving a greater premium.  This will also cause the VIX to rise, so you can have the VIX rise in rising markets as well. 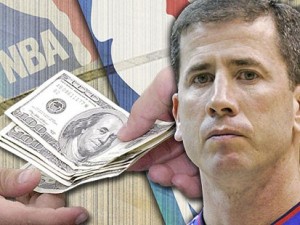 Anyone who watches basketball knows how vital a role the referees have in the game.  They are relied upon in every aspect, one missed call could decide a game.  While most referees do their job, others gladly take bribes to miss a call, create fouls, and to do whatever they can to change the outcome of the game.  Essentially the game is fixed.  There will be only one result, no matter how hard the other team tries.  This is what our stock market looks like today.

In my view the FED has been gaming the markets since the financial crisis.  Their main objective since March 2009 has been to re-inflate the bubble that had just burst.  One way was was to introduce QE, which they did in the middle of March 2009.  They introduced operation twist, they put interest rates at zero in December 2009 and have vowed to keep it that way well into 2014.  If that wasn't enough market manipulation they got their hands dirty in the equity options market with the goal of affecting the value of the VIX.

Since the financial crisis in 2008 when the VIX soared to record levels, people see a high VIX level and equate it to market fear, which is why its referred to as the "fear index".  Fear was running rampant as the markets crashed in 2008 with the sell off ending in mid-March 2009.  The VIX was at elevated levels.  Bloomberg Radio was quoting the VIX every chance it could get telling its listeners how high the fear was in the markets.  An elevated VIX  psychologically meant that the market could crash again at any time.  People were scared to put their money back into the markets.

What did the FED do?  (This is merely my opinion, I have zero evidence to back it up other than what I have seen and traded.)  I believe the FED sold naked SPY puts to artificially decrease the value of the VIX and reduce the "fear index" with the hopes of restoring investor confidence.   It's a novel idea as they can sell as much or as little as they like at 5-7 different put strikes, bringing the price of these options down, which ultimately brings down the price of the VIX, and since you are the FED who can print money out of thin air, you pick strikes that you "know" will never get hit.

Step back and think about it for a minute.  Not only can they lower the VIX, but their sales result in free money to buy equity futures to help augment stock prices. It gets even better.  You know that dip that gets bought relentlessly each trading day.... the BTFD investment philosophy that's turned market participants into Pavlovs Dog's,  look no further than the Fed.  Its the perfect strategy to get the market accustomed to a particular trading pattern.  The bears get burned more than once selling the dip, they won't do it again.  The bulls see every dip being bought, they aren't going to let the chance to profit pass them by.  The markets are and have been fixed by the Fed since 2008.   The PPT, plunge protection team has turned into the BTFD team.  Every stick save you see at the end of the once a month down day is the "invisible hand" lifting equity prices.  The VIX drops, stocks rally, and all, on paper, looks well.

The next time stocks are down big and yet the VIX is even or only slightly lower, as has happened many times over the last few years, think about how this could be.  Is the market really this complacent?  Or is the FED dumping naked puts into the market to try sand make everything look better than it really is?

The VIX is in.  Don't fight it.  There is nothing you or I can do about it.  Trade what you see, not what you want to see, or what you should see.