I wrote about the market back in November, right when the S&P was closing at all-time highs, and all the pundits and talking heads were screaming "Market Bubble". Bubble? I didn't think so, and thought the market would continue to ramp in 2014.

Since that time we have endured :

Yet here we are, at all-time highs on the S&P once again, with the bears wondering why, and the bulls wondering if there are too many traders on the same train(or at least I am). Seemed back in 2011/2012 every one of my bullish comments or posts would be met with a throng of bears citing high p/e multiples, unsustainable growth, or a market that is on the verge of collapse. Those same bullish comments are now met with agreement and likes/favorites from traders. A concern for sure, but not something that I think will derail this market rally for sometime. Here is why:

"The Stock Market is Shrinking" - the number of publicly traded companies has been in a decline for sometime. A great article from Kopin Tan in Barron's a few weeks ago also paints a nice picture of the decline. Listings have been nearly cut in half since 2000. 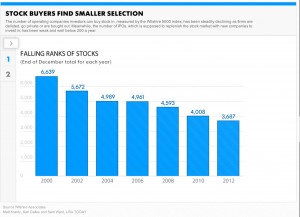 So less stocks to trade, which means choices for investors are far less than in the past or at anytime since at least 1974(Wilshire 5000 inception). We have also had an increase in corporate buybacks, totaling over $450 bil in the 12 months ended sept 2013. Although one would think that would ultimately lower share counts, it usually mitigates increases due to conversions or options being exercised. Yet the buyback 'bonanaza' at the end of 2013 started to exceed the issuances, meaning less shares in the tradeable float. Keep in mind we are also in the midst of a 5 year bull market, where buying has exceeded selling. So in summary we have less supply in regards to shares of publicly traded companies. Also makes you wonder about those saying the market has low trading volume...

Everyday there is a new tweet or blog post comparing 2014 with 1929 or some other year where the market fell on bad times. Of course it's easy to respond with "This time it's different!". But is it? There is no doubt in my mind it is, and globalization is a big reason why. Back in May of 2013, James Surowiecki wrote a great piece in the New Yorker entitled, "Boom or Bubble". Here is an excerpt:

Many of the “American” companies in the S. & P. 500 are multinationals: a study of two hundred and sixty-two of them found that, on average, they got forty-six per cent of their earnings from abroad. This is a relatively new phenomenon. As late as 1990, foreign earnings accounted for only a small fraction of corporate profits in the U.S. Today, they account for almost a third of corporate earnings, and they’ve nearly tripled since 2000. So comparing corporate profits only to American G.D.P. yields a false picture of how companies are doing. The global economy, even with its current woes, is projected to grow more briskly than the U.S. economy over the next decade, so corporations will continue to benefit.

In a nutshell more than half the companies in the S&P 500 get at least 46% of their earnings from abroad. That is a staggering number, and one that is probably discounted by the investment community. So in summary, globalization is not completely factored into the marketplace.

The more I trade the markets, the more I realize no one knows what the heck is going to happen next. I don't pretend to know either, but the quicker you come to that realization, the better trader you become. Here is a great piece from Henry Blodget, the co-founder of the Business Insider. Don't pay attention to his market idea(yes he was bearish), but more his early life. Realizing that the folks you look up to have just as much a clue as you, can be a moment of Nirvana. So market sentiment is or has been mostly bullish, and bears have been reduced to record low levels/sentiment. Does that matter so much? Maybe... but January's pullback was very telling to me, as some of the uber bulls were shaking in their boots, finally calling for the dreaded 10% correction. Meaning even those who are bullish, have been wrong in this market the past 5 years, why would they be right now? So in summary, no one knows where the market is headed... 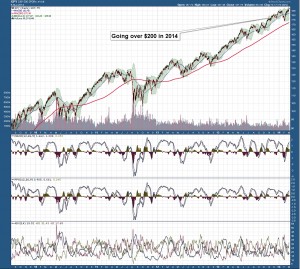 Am I Bullish to a fault? Not at all, I am a bear at heart. But I know this game will play on for sometime, and I hate to miss a good game. Ukraine concerns provide some nice headwinds heading into the next few weeks... every good rally needs some headwinds. I will have more on the coming weeks...

3 thoughts on “Is This Market Headed Higher?”