I pointed out the huge $5 million trade at the April 24 Strike this morning, about an hour into the trading session. The buying for VIX calls didn't end there, however. The action was clearly skewed for CALLS, and the ratio should cause your eyebrows to raise.

Look at the action today on strikes in 2014: a stunning buying spree, which could be longs hedging against volatility in the coming months or the bears pushing the few chips they have left into the pot in the hope that, at some point, this centrally planned house of cards will come crumbling down before April 2014. If we've learned anything over the last 5 years it's that the central banks can kick the can farther and farther down the road. But this option action isn't easily ignored. There are million-dollar option trades on increased volatility, Far-out-of-the money strikes seeing unusual volume and 216,000 calls versus a 38,000 put volume today. Let's keep a close eye on this. When you see millions of dollars hit a far-out-of-the-money strike, more often than not it's a trade you want to follow: 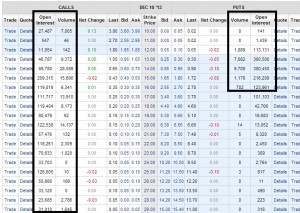 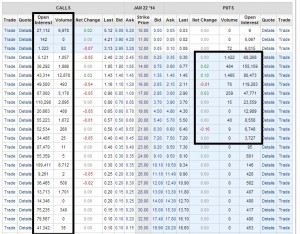 Kaitlyn Kiernan from the Wall Street Journal was all over this as well:

Stock investors seem to be growing more comfortable with the outlook for Federal Reserve policy, but some options traders are betting that uncertainty and wider price swings will return ahead of the mid-December Fed rate-setting meeting.

After a period of calm in recent weeks, expectations of heightened volatility are leading to a pickup in options trading volume in the Chicago Board Options Exchange's Volatility Index. Options traders are again setting up positions in contracts that would profit from a jump in the VIX.

With the VIX sitting at 12.60 Monday, near multiyear lows, some options traders say investors are too complacent ahead of the two-day Federal Open Market Committee meeting which starts Dec. 17. Some investors worry that an aggressive paring back by the Fed of its easing efforts could set back a fragile economic recovery. As a result, signals from the Fed that it is ready to start "tapering" the bond purchases it has been using to support the economy could spook the stock market.

"There is a lot more to look forward to than people are preparing for," said Mark Sebastian, director of trading and investments at Swan Wealth Advisors, who last week set up a stock portfolio hedge in March options. "If the next couple months of jobs data are good, watch out," Mr. Sebastian said, referring to the Fed's statements that it is looking for strength in the employment situation before it cuts back on its supportive measures.

To some extent, traders are betting on a repeat of patterns seen before recent FOMC meetings. Since midyear, stock market volatility has risen in advance of FOMC meetings as investors speculated on when and by how much the Fed might start cutting back its stimulus measures.

The VIX peaked this year in June at 20.49, after the prospect of "tapering" was first introduced.

While the VIX has held near its lows of late, trading activity has been on the upswing in recent days.

Trading in VIX options averaged about 730,900 contracts per day last week. That is double the number of contracts traded over prior four weeks, when about 376,600 contracts changed hands daily amid the belief the October government shutdown would push back any tapering.

Amid the ramp up in VIX trading, call options, which profit from a rise in the market's so-called fear gauge, were trading at more than twice the rate as put options, which look for continued call to profit.

Mr. Cole's fund, which has about $33 million in assets, looks to profit from what it sees as "mispricings" in the expectation for future uncertainty and from periods of heightened market volatility.

In the options market, notable trades during the week included a strategy known as a call spread, in which a trader buys calls at one strike price and sells an equal number at a higher strike price. While selling calls at the high price caps profits, the premium collected from the sale helps offset the cost of buying the lower strike calls.

On Tuesday, one investor bought about 100,000 February 20 call options, while selling February 28 calls. That spread would maximize gains at about $69.6 million should the February VIX contract settle at or above 28-71% above the February futures contract price Monday. VIX futures last settled above 28 in November 2011, when it finished at 33.36.

The trader also bought 100,000 March 23 call options, to gain additional exposure to a market shock out to March. Before those options expire, the Fed will meet three times, Congress will again attempt to pass a full budget, and the U.S. may run into its federal borrowing limit.

On Thursday, the largest VIX options trade was one that looked for the December future to settle above 15--about 9.9% above Monday's price.

The investor bought Dec. 15 calls, while selling the same number of VIX Dec. 14 puts to offset the cost, and buying Dec. 13 puts to hedge the downside risk of that short position. Overall, the investor collected $2 per contract, and risks a maximum loss of $98 a contract if the VIX falls below 14. But should it rise above 15, the investor could collect $100 per contract for every point above 15 the index moved.

-Write to Kaitlyn Kiernan at kaitlyn.kiernan@wsj.com

One thought on “VIX Calls Being Bought In Earnest Today”