While the talking heads in the media were busy touting the Hindenburg Omen earlier this year, and telling everyone to SELL stocks, the Heisenberg Indicator remained as steadfast as it has since the market lows of 2009. The Indicator has given one buy signal and never looked back, in fact. Earlier this year it targeted 1850 for the S&P 500 and that target remains very much in sight.

It's amazing to me how the media will focus on a train wreck like the Hindenburg Omen, which has a worse batting average than the 1986 New York Mets' Rafael Santana, and ignore an indicator that has been right every step of the way. Truly, the Heisenberg Indicator has defied all sell calls from the so-called "pros."

With the professionals telling you to sell into strength when the $SPY was at $164, this is what the HI was saying last July: 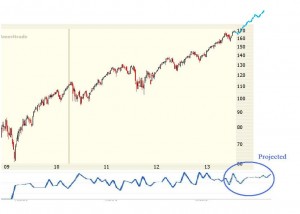 With stocks now at record levels those telling you to sell are jumping on the bandwagon, and rightfully so. We at OptionMillionaires.com have been saying for quite a long time that this market is going much higher. Every dip has been a buying opportunity. We hit new record highs today before selling off late. So, what's the Heisenberg Indicator saying about stocks for December?

Here are the charts:

Basically, the HI remains in very bullish territory. It recently hit record levels along with stocks and is pointing to more upside heading into year's end. Back in July, the Indicator was projecting 1850 on the S&P 500 and it looks like that figure will be hit. Who else was calling for 1850 on the S&P when it was at 1640 earlier this year? The Taper, Syria, Cyprus: all events that were going to take the market much lower. Yet here we are, exactly where the HI said we would be. When stocks finally roll over and crumble in 2025 and the HI posts its first failed projection, perhaps then the mainstream media will pick up on it. But for now, it lies virtually unnoticed and unappreciated, which is right where it wants to be.

Read more on the HI here: