It was a nasty end to a pretty rough week, as the Nasdaq tumbled over 3%, and momentum stocks were taken to the cleaner. If a stock did not have a dividend, was in the tech sector, and was considered a growth stock, it sold off - especially on Friday. The darlings of 2015 -Facebook, Amazon, Netflix, and Google - were pummeled, and that was despite strong reports from Google and Facebook last week and the week before. Biotechs also continued to be under pressure, some cited drug pricing concerns as the catalyst. That could be some of it, but seems more like folks are  selling positions that are up big over the past few years..ie.$IBB is still up 75% over the past 3 years.

So where do markets go next week? The more I start digging, the more I start feeling a bear markets is coming. It does not mean stocks cannot rally at points. Markets do not go straight down, but I do think now that a 20%+ haircut is on it's way(at minimum). The Nasdaq is already down 12.8% on the year. So to say it will fall another 8% is not a stretch, and not really a bold call. Here are some quick thoughts on why I feel that way, and I will try to elaborate more on the topic later this week.

I mention this quite often in the chatroom, but there seems to be more more folks asking me about the market lately as I am out and about - people who are accustomed to checking their 401k or retirement accounts on a daily basis and seeing green arrows. Now those accounts are down quite a bit, and the media headlines are starting to tear at their emotional psyche. And of course, most of start thinking about 2008. The longer the market stays at these levels and lower, the better the odds of folks starting to pull the rip-cord. Selling begets selling...

Lower oil prices were supposed to be a boon for the U.S. economy. Now it seems every cent drop in the price of Oil is met with an equal drop in equity prices. Barron's decided to put Oil on the front cover on this weeks magazine : https://twitter.com/OMillionaires/status/696369060012040193

The article calls for Oil to drop near $20, then rally back over $50 to end the year. While I agree with the first target, I totally disagree with the second argument. I truly think Saudi Arabia is going to produce as much Oil as it can in the coming months and bankrupt everyone else looking to compete. It costs about $10-$15 to produce a barrel of Oil for Saudi Arabia and most of the Middle Eastern countries. Cutting production only lets those with higher costs to remain in business. Now is there chance to take them all out, and remain relevant in an ever changing world. The threat of clean energy is not going away - eventually Oil will not be the same resource it once was.. they know this and are going to seize this opportunity to maximize what they can, while they can. At least thats my thoughts or what I would do if I was them. The Barron's article is confirmation to me that many think Oil is going to magically return to $50+ like it has always done. I think it is different this time, and the defaults in the sector will pressure the U.S. economy, the Banks and funds that issued the debt based on much higher Oil prices, and ripple into many other sectors. As a sidenote, I find it comical they think Oil is selling off based on a slowdown in China.

Earnings continue to decline on a YoY and QoQ basis. It will now be 4 straight quarters of declines. The energy sector has been the major factor in that, and in the past, removing the sector would yield positive earning comps, but now that looks like it will not be the case.

I was bullish equities almost to a fault starting in 2011, and wrote quite a few pieces on why I thought the S&P would break 2,000 : https://www.optionmillionaires.com/market-still-headed-higher/ . One of those catalyst was Globalization, as any lackluster growth in the U.S. wouldl be offset by U.S. companies growth aboard. With the world economy currently struggling, its no shock to see some headwinds, especially with  a stronger US dollar than companies had been accustomed to. As Q4 earnings reports start to wind down, think the trend of negative revenue and earnings growth will be another reason for concern going forward.

Those are just a few reasons why I think the market will continue to slide. The more I look, the more I feel the S&P is going to test 1650 at some point this year(it closed at 1880 on Friday). I will add more color to my commentary at some point this week. (some other catalysts for downside: China, Banks, U.S. Presidential Election, Commodity prices, Puerto Rico, Japan, N.IR.P.)

That $187 area on the SPY continues to be critical support, if It can hold this week, then maybe we can get a small bounce, but a break below sets us up for a quick test to $181, then $177: 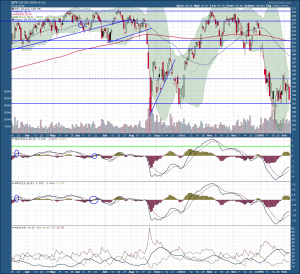 We  have Yellen's semi-annual testimony in front of Congress this week(Weds/Thurs), so something to watch as well.

Lets have a great week and see you in the chatroom!