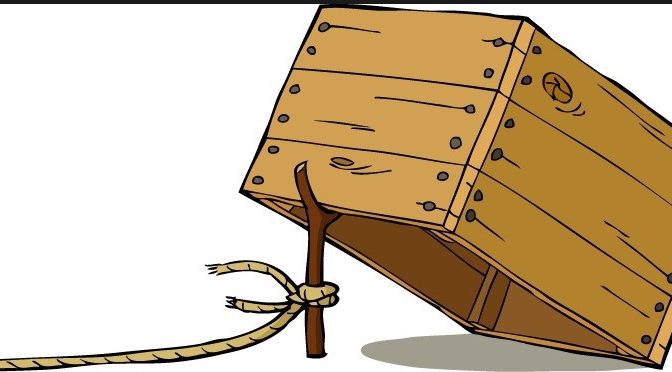 Sadly for the bulls, yesterdays 1.2% gain was just another bull trap.  Those not wise enough to sell earlier this year when this rally was called a bull trap, are now trapped with even more gains in 2019.  Just terrible.

Bull traps?  The evidence was apparently in months ago.  Carefully crafted charts with big red down arrows from writers who have been bearish on this market since 2009.  How could we all been so blind to miss the pending collapse of the equity markets?

It is unfortunate......  Ironically, as I step my sarcasm up another notch, and as I have stated previously,  the ones calling the rally a bull trap months ago are the ones with the most experience getting trapped as a bear.

In late 2016 with the $SPY at $200, those calling this recent rally a bull trap, were saying the market gains were fake, built on nothing but hot air.   Yes... hot air and little else....

And let's not be blind to the upside.  The market will pull back again.  The Bull trap folk will be at it again.  Perhaps with a VIX rocket article, or an article saying the market is moving higher on something other than hot air.... their carefully crafted charts will just slide to other price points to validate their bearish narrative.

They will continue to blame the Central Banks for all the ills of the world.  Coffee cold?  Damn you Powell!  Steak overcooked?  Yellen you are a terrible cook!  Car won't start?  Bernanke , you balding charlatan,  are an awful mechanic!  Market keeps heading higher?  I'm going to write another bearish post perhaps this one will stick!

What do I say?

A Bull trap a day keeps the downside away.

The irony, and I have been saying this for many years as well, is that the reason those uber bears give for why this market will fall, is exactly why it will continue to defy their downside calls.

The Waiting is the Hardest Part

The $SPY broke over resistance, came back to test it... it held, and is now heading higher.  Those record highs are getting closer.

The Nasdaq is just a few more bull traps away from fresh record highs.

And we know how that works out.  See you in the chat room!

Friday Focus: Running Out of Excuses to Sell