Has the Market Finally Topped?

It was nearly a month ago when I asked the same question.  You can read my thoughts on the matter Here: The Top is  In?

The cliff notes version is Here:  NO - the top is not in.

This morning the market is falling.  S&P500 futures are down .5%,   the VIX is roaring higher, and market top calling addicts have stopped shaking for the time being.

After almost 8 years of a relentless historic bull market, the top has finally arrived. 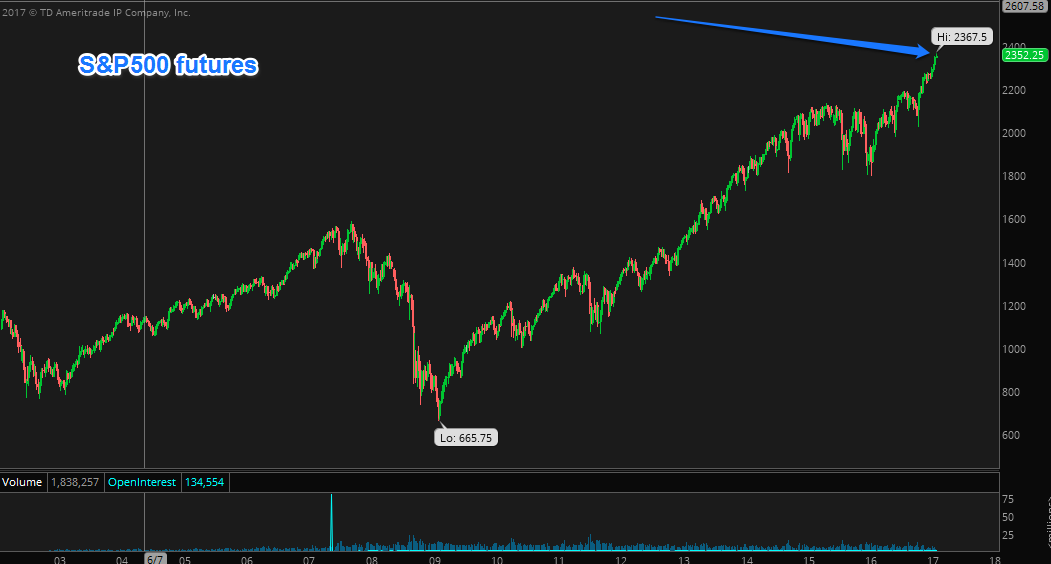 ah!   made you look....  There is no 'top' on this chart.  Actually anyone calling a top here is just guessing, and likely has tried to guess the top for quite a long time.

If you look at this market as an object in motion, which is something we like to call a trend, the object is still in an upward motion.  It's heading higher.  A .5% or even a 5% pull back is still not enough to negate the positive motion.

As has been the case throughout this massive bull market, the more top calls and bearishness I see, the more this market wants to defy it.

Take one of the more widely followed market pundits Doug Kass.  His trade of 2017 was short $QQQ.

It was his trade of the year

And this was done with the market coming into 2017 with some incredible post election momentum. 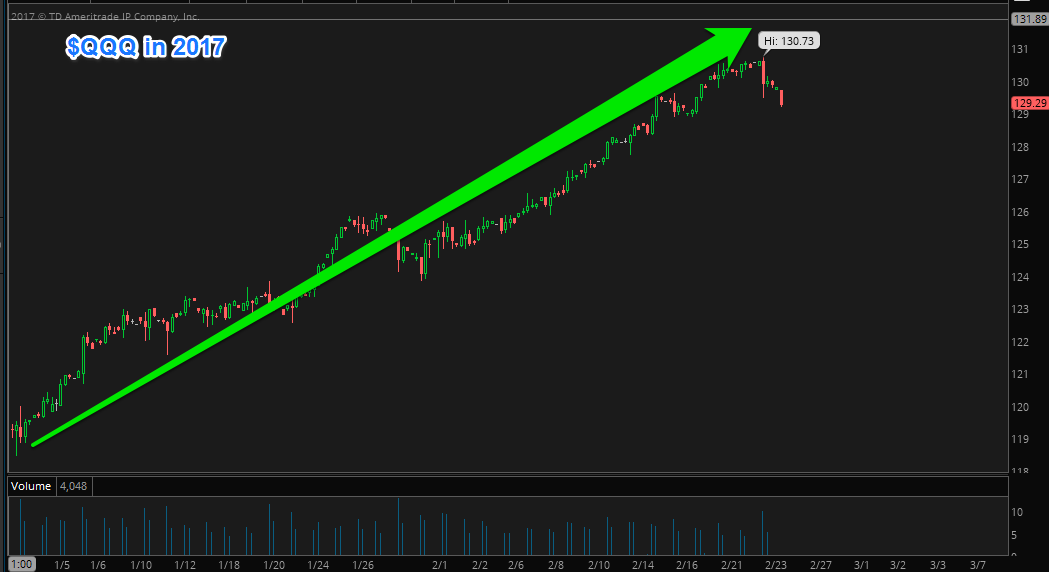 His primary Thesis for Shorting $QQQ was:

The $QQQ has already rallied 25%!  That was his main reason for shorting $QQQ.  It just can't go up anymore.... right?  WRONG!!  Basing any trade on "it already has rallied" is like saying the New England Patriots have already won enough games.

And it's quite the same as you peak your head into other bearish pieces.  It just can't go higher.  It's rallied so much already.  It's already priced in.  The market is a bubble.  The central banks are running out of ammo.  Earnings suck.  Growth is lame.

Actually the more excuses I see, the more I think this rally still has a lot more to go.  The usual suspects who have been bearish and wrong  for years, are the ones tooting their horns on CNBC and Marketwatch.  This market was running on hot air, myths, and unicorns late last year.

Everyone who was 'blaming' this rally on the FED the last 8 years are now blaming Trump.  And don't get me wrong, much of the rally the last 8 years has the Central Banks finger prints all over it.  And yet when bearish market addicts profess just how far the market is going to crash, they always bring up the FED, and just how much they've distorted asset prices.  They say the market's will crash because of  the actions of the Central Banks.  And to me, the reason why we will keep rallying is just that.  The crash will be to the upside, if that makes any sense.  You really think after 8 years of training wheels and juice boxes, the Central Bank is going to send this market to college.  No.

Is the top in?  No.  I'd say we are closer to the market top addicts overdosing on top calls than we are on a real top for this stock market.