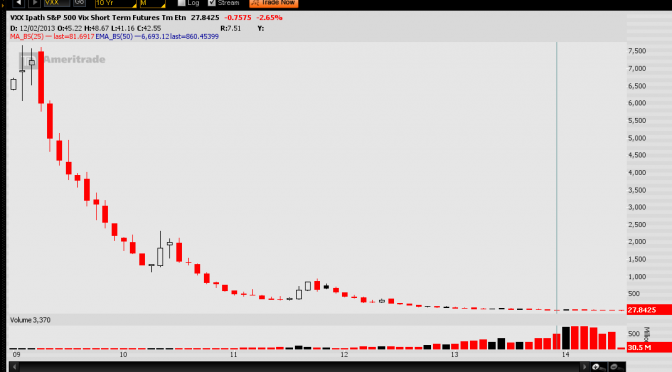 In the Fall of 2008 with equity markets all over the world crashing in unison, the VIX became a 'household' name.  News trucks suffocated the nearby roads surrounding Wall Street for weeks on end,  with more flocking to the scene on those 700 DJIA point days.

The VIX was labeled the "fear index" and the news networks were sure to update its nervous viewers its exact reading as often as possible.  "The Fear Index rose to over 80 today as Wall Street experienced a massive sell-off. When will this selling stop?"  The financial pundits were out doing the best they could to garner the headlines. James Cramer came on the Today show to tell everyone to sell their stocks and hide all their money for at least five years.

The VIX was transformed into a beast, an evil monster capable of eating all your investment accounts and leaving you broke.  A few quotes from October 2008 really encapsulate how the VIX was viewed over 5 years ago.

Fear is running high on Wall Street. Just look at the Fear Index. With all those stomach-churning free falls and sharp reversals in the stock market recently, traders are keeping a nervous eye on an obscure index known as the VIX.

So how scared are investors? On Friday, the VIX rose to 70.33, its highest close since its introduction in 1993. To some experts, that suggests that the wild ride is far from over.

“Right now, it’s an extremely important part of the puzzle,” Steve Sachs, a trader at Rydex Investments, said of the VIX. “It’s showing a huge amount of fear in the marketplace.”

The VIX is hardly a household name like the Dow. But lately, it has become a fixture on CNBC and other financial news outlets, with commentators often invoking an index that most of the general public was blissfully unaware of only a few weeks ago.

To me what really stuck out was this quote:

Some traders think all the publicity has only added to the anxieties that the VIX is intended to reflect. “The VIX is a self-fulfilling prophecy,” said Ryan Larson, head equity trader at Voyageur Asset Management. “It’s almost adding to the problems.”

Speaking on Thursday, when the VIX hit an intraday high of 81.17 before closing lower, he said:
If“You see the VIX trade north of 80, and of course the media starts to pick it up.” Mr. Larson continued, “It’s blasted on the TV, and for the average investor sitting at home, they think, oh, my gosh, the VIX just broke 80 — I’ve got to go sell my stocks.”

Over three years ago I wrote a piece on why I think the VIX continues to get trounced lower along with the instruments you can use to trade it: the VXX and TVIX to name two.

If a high VIX creates, as the gentleman above said, "a self fulfilling prophesy" would it not be in the best interest of the financial markets to keep the VIX as low as possible?

I wrote about that three years ago as well.

If you want to talk about the currency market, the bond market, and the stock market being rigged by the Central Banks, its a heck of a lot easier to manipulate the VIX.

Think for a minute if you were the one guiding the SPY marionette.  To lower the VIX you would simply sell call and put options on the Index and keep the market within that range.  The capital raised from selling those options could be used to augment stocks via stock futures, perhaps smack another index around, the possibilities are limitless.

All the while you are creating an illusion of market tranquility.  More than five years ago the VIX was a symbol of fear and anxiety.  Today it is viewed as a sign of complacency, which is telling market participants "everything is going to be just fine".   If an elevated  VIX created a self fulfilling prophesy of stock selling, an artificially low VIX is creating a self fulfilling prophesy for investors to buy, and that is just what the FED wants.  Its the Euphoria Index, and the lower it goes the higher it gets........ if that makes any sense.

Zerohedge has a nice piece on this phenomenon today,  they've been covering the VIX beat down seemingly everyday for the last five years.

The $VXX continues to get slaughtered,  some big Jan 2015 option trades imply this type of action may continue for quite a long time.

A business news Anchor 5 years from now  "The Dull and Drab Index hit 7 today as the stock market did absolutely nothing.  In other news CNBC is now a 24 hour Paid Advertising channel.  Up next, how one stock trader fell asleep at his trading desk and never woke up.  Yes! in 1929 traders were killing themselves by jumping off of buildings, today they are getting killed with a heavy dose of BOREDOM" 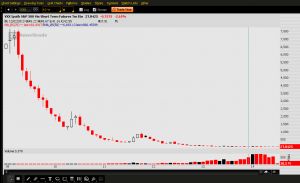