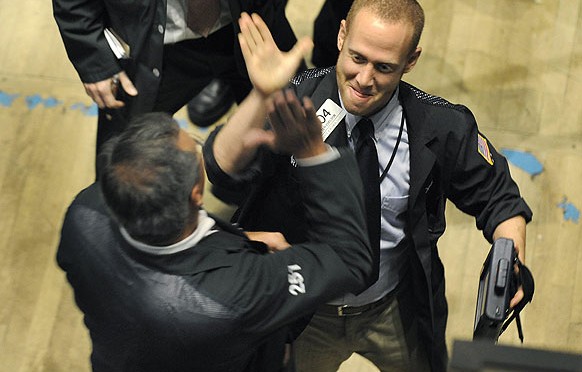 Let's face it.  Would the stock market be where it is today if the Federal Reserve and the U.S. Treasury did nothing in 2008?  I think the actions back then have unleashed a global asset manipulation scheme that has changed the financial landscape forever.

Why do I have this scene in my head of two gentlemen laughing wildly while they recount the market's 'wild' moves so far this week?  Their conversation went something like this:

"What do you think about the action the last few trading days?  People were complaining that the market wasn't moving anywhere... we sure taught them."

"Hahahaha... yeah.  When you brought it down for absolutely no reason on Monday.... that was good.  But today?  Man even I was a little nervous..... and then for the second time this week you had it come all the way back.  Pure Genius!"

The scene ends with these egregiously ugly guys stumbling out of the joint with a pair of young gorgeous ladies on their arms.

Of course it is a fictional scene, the stock market is not manipulated. (cue the sarcastic laugh) It is not run by one person who knocks it down or lifts it at their own choosing.  The buyers are legitimate investors, traders, funds, companies,  not central banks or mythological teams put together to avert economic disaster.

Volatility has been collapsing because the economy is doing better, jobs are back, production is cruising along, the consumer is spending money, and certainly not because someone is selling options to buy equity futures.  No... that would never happen.

The bond market being manipulated?   Central banks globally are manipulating the bond markets.  Here in the United States the Federal Reserve has been buying bonds to artificially lower interest rates or in other words, to manipulate the Bond Market.  The Japanese are doing the same, and in Europe the farce is even more outrageous.

Two years ago Greece, Portugal, Italy, Spain... these countries were a week away from running out of money.  It was the European debt crisis and absent massive assistance the entire region would have gone belly up, taking the rest of the world with it.  At the time no one wanted to buy their bonds, which makes sense.  When you can't pay your bills with the money you have, and you continue to borrow to pay your debt, who in their right mind is going to give you more money?  If someone you knew spent without regard, maxed out their credit cards to feed this habit, and borrowed every last penny..... would you lend them more money?  If it isn't sound policy to lend money on a personal level to someone who doesn't know how to manage it, you can imagine what it means when a Central Bank is supporting irresponsible fiscal behavior.

Today, countries like Italy, have bonds that are yielding rates similar to the United States.  Under normal market conditions how is this possible?    Under current market conditions: asset price manipulation, fabrication of fresh currency, forcing banks to lend via negative interest rates, ZIRP, YIRP, TURP (I made those last two up)..... everything is possible.  Its a bold new world where higher asset prices are a mere mouse click, swipe, double tap, two finger squeeze, away.

5 years after the U.S. financial crisis, and 160%+ of stock market gains, the Central Banks still will do anything they can to keep this global house of cards from collapsing.  2008 was the year the Central Banks opened up the Pandora's Box.   The financial crisis gave them the excuse they needed to do whatever they felt necessary to preserve our 'economy'.  The Pandora's Box held the pass needed to manipulate markets as they see fit.  Stocks, assets, bonds, everything is lifted higher and for the good of our country and economy.  Inflating asset prices has never felt so good.

Picture a 6 year old finding a pack of matches and figuring out how to light that first match.  The look on his face when the match stick bursts into flame...  awestruck.   The child places it on a napkin, and it becomes engulfed, the child is still mesmerized.  But then it spreads to the table cloth, up the walls..... what started out as a great event, a wonderful experience, has turned into a nightmare.

Is there someone out there hitting a buy button every five minutes to make sure the stock market continues its uptrend?  I'm not so sure there is.  I don't think there is minute by minute manipulation of the stock market.  However I do believe that zero percent interest rate policy and QE have inflated asset prices to a level where they can not be allowed to fall.

At some point in the future the match that was lit in 2008 will start to burn out of control.  The global asset price manipulation "house of cards", that took so many years of careful construction, will come crashing down in a disastrous inferno.  But for now Just Buy That Dip!

2 thoughts on “Are The Markets Rigged?”