Chipotle Mexican Grill ($CMG) reported 4th quarter earnings after the close yesterday, missing revenue estimates while besting EPS estimates. It was the first report after the much publicized e.Coli outbreak which the CDC said on Monday, '..appears to be over'.

This morning, analysts are out in droves reaffirming Buy and Outperform ratings. Were they on the same Conference Call I was? If they were, then the only reasoning I can see for their bullishness is 'hope based' and built on the assumption that customers will return to Chipotle Mexican Grill ($CMG). If you were an investor who does not care about a companies fiscal responsibility, then this Conference Call was right down your wheel-house.: Spend as much labor as you can to serve the customer? Check. P&L not a priority? Check. Ramp up advertising at least 400% from last year? Check. Promotional activity? Check. Take another $300 million from the $1.1 billion warchest to try and average down on your $500+ mil in share purchases over the past 3 months? Check. It goes on and on, but if there was one theme from the conference call is was the exceptional rise in costs for the first quarter and likely through all of 2016.  Chipotle Mexican Grill ($CMG) reported $122.6 million in profits for the first quarter of 2015, a 47% increase from 2014. They expect to report ZERO profit in the  first quarter of 2016. On the bright side, it should help their comparables in 2017.

Like any crisis, it takes aggressive moves to try and stem the bleeding - I understand what Chipotle Mexican Grill ($CMG) is trying to do. But the main assumption is that customers will return, what happens if they don't? And by the looks of their stores and a few checks of social media, seems the customers have not come back yet.

If you missed it, I wrote about  back in December : https://www.optionmillionaires.com/chipotle-mexican-grill-cmg-sick/ .I love the company, and wish I could convince myself that this is the bottom, but I can't. Chipotle Mexican Grill ($CMG) was a growth stock given lofty multiples based on it's historically strong performance and growth, it is not anymore and does not deserve the high multiples until growth returns.

Some analysts have dropped their earnings estimates under $9 for 2016. If you keep the peer average of around 30-34x's earnings, that makes the stock worth around $270-$306. I don't think the stock heads down there, but do think the 'hope' and 'assumption' based analysis by analysts is flawed.

I think the stock comes and tests $350 in the coming weeks. Here are some quick notes from the conference call: 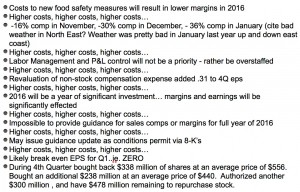 I hold puts on Chipotle Mexican Grill ($CMG) and may add to them or close my position at anytime.