Chipotle Mexican Grill ($CMG ) has had a rough few months dealing with the much publicized E.coli outbreak, which has caused the stock to plummet over 34% since reaching $750 on October 13th. The company has done it's best to try and ease concerns, with the CEO doing interviews on CNBC, NBC, and other media outlets. At the same time Chipotle Mexican Grill ($CMG ) has taken out full page adds in national and local newspapers: 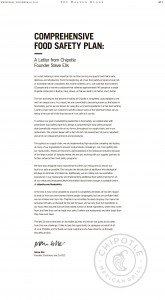 Despite the efforts, the stock has yet to find much support. I think the trend continues and the stock falls to at least $450 in the next few weeks, if not lower. Why? The growth story is over for at least a year as the stocks fundamentals are shot and the brand name has been tarnished.

The stock closed yesterday at $493.52 and is expected to earn $15.51 for 2015, putting the price to earnings ratio at 31.81 - a number inline with some of the other high growth companies in the sector like Panera Bread ($PNRA), which trades at a 33.1 multiple. That normally would be a good thing, except the inline number comes after the stock has already traded down 34% in the past 2 months. The price to earnings ratio was 39 back in October. So one would think the stock price currently reflects the earnings hit from the E.coli outbreak, but that train of thought is likely flawed as well. First, lets look at the 8-K Chipotle Mexican Grill ($CMG ) filed on December 4th, 2015, where they lowered their guidance for the fourth quarter, and rescinded their comparable restaurant sales increases for 2016. In the release, the company reduced their EPS guidance for the fourth quarter to a range of $2.45-$2.85 - analysts were expecting $4.09. After which, comments were made around traffic during and after each CDC update(CDC updates are here ):

If these sales trends continue, we believe comparable restaurant sales could be in a range of -8% to -11% for the three month period ending December 31, 2015.   Future sales trends may be significantly influenced by further developments, including potential additional announcements from federal and state health authorities.

After issuing that 8-K, and after numerous attempts to assure consumers that their restaurants were safe, the CDC announced another investigation into further cases of the E.coli  Outbreak on December 22nd.  So after seeing declines of 20% and 22% from the previous CDC updates, what would one expect from this latest episode.. especially after being told by the CEO that their restaurants were safe? I expect it to be much worse then the 20% and 22% declines seen previously. Which means more guidance reductions from the company, and more damage to the stock price as investors flee. If Chipotle Mexican Grill ($CMG ) experiences a 20%+ decline in sales this quarter, it's possible revenues will be around $850-900 million - numbers it has not seen in over 2 years.

The Brand is Tarnished

Taco Bell ($YUM) offers a great comparison for those trying to figure out the long term impacts of an E.colli outbreak to sales. In late 2006, Taco Bell had an E.coli outbreak of their own, effecting 71 people in 5 states. The impact was immediate, with a 5% decline in Q3, followed by an 11% decline in Q1. It took over a year for positive comps to return, and some of that is a function of going against the lowered sales numbers from the outbreak. Something Chipotle Mexican Grill ($CMG ) will enjoy at some point near the end of 2016 or the start of 2017: 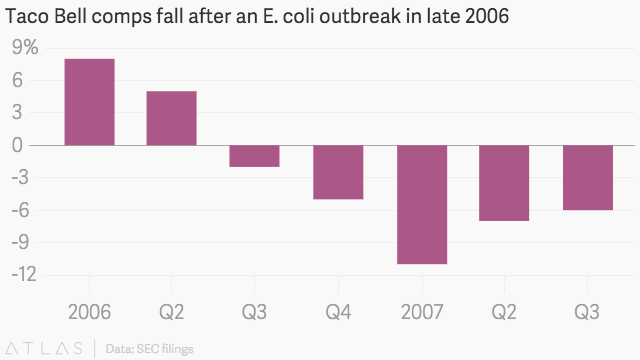 There are two big difference here between Taco Bell and Chipotle:

And they certainly have not been eating at Chipotle Mexican Grill ( $CMG ). Any frequent customer is used  to the long lines. If you walk by a restaurant in NYC, there are always folks piled in during lunch time. That scene is repeated at their over 1.500 restaurants every day... that was until the outbreak. A quick Twitter ( $TWTR ) search answered any questions one would have around the impact the E.coli outbreak was having, here is just a sampling:

And some pictures of empty locations :

At some point, the stock will start to recover, and it will likely be well before sales start to return. I don't think that recovery happens until at least $450, maybe lower. At that level, the company would be trading at a more reasonable 3.5x revenues and have a P/E ratio of 29.

I know,  its not really a bold call for a stock to drop $40, especially when it has already fallen $250 - but I do think there is still money to be made playing for downside, a direction that has already offered plenty of opportunities: https://www.optionmillionaires.com/e-coli-enhanced-chipotle-put-options-go-haywire/

The wild card in all of this is the CDC. Any further negative updates which include new cases or outbreaks, and the stock falls under $400. Time will tell. I currently hold January puts on Chipotle Mexican Grill ( $CMG ) and may add to or close my position in the next few days or weeks.