What is the point of making predictions?

Peter Drucker — 'Trying to predict the future is like trying to drive down a country road at night with no lights while looking out the back window.

Mr.  Drucker must have never heard of a Google driver-less car.  And what fun is driving into the New Year without your lights on?  You might not be able to see miles ahead, but when those road blocks come you can navigate around them.  So here we are... 2016 is coming... how are you driving your car into 2016?  A quiet country road with your lights off?  Or a busy 6 lane highway at 100 MPH?  Maybe you are trying to lose weight and your walking instead.  Walking gives you a chance to look around.

Anyone who has traded long enough knows that price action usually happens before an event.  The old 'buy the rumor - sell the news' axiom.

The 2015 Predictions I made at the end of 2014 were a great guide heading into the year.

Crude oil, the US Dollar, commodities, bonds, precious metals, gold miners... my perspective on all of them in 2015 were rather accurate.  Just  a lucky guess?  Perhaps.  Here are my 2016 predictions.   Let's see how lucky I get this coming year.

(1)  Bonds of all shapes and sizes will  have a dramatic sell-off.   At the start of 2015 I saw a strong rally for the bond market and it did early in the year.  We had a sharp move to near $140 on $TLT the 20 yr bond treasury fund.  $TLT has since pulled back to $120.  I think $TLT could trade under $100 in the first half of 2015.  The selling will, at times, come fast and furious.  The bond bubble will finally burst.  We've already seen the deflating junk bond bubble.  The selling will spread to the rest of the bond market including the 10 year, which sits precariously at long term support.  That dam of support, when it collapses, will bring with it a flood of selling.  The $TLT 20 yr bond chart has compressed and looks poised for a sharp move lower.

The 10 year bond looks on the brink with a support break likely to wet the sellers appetite.

Junk bonds will resume their decline in earnest in 2016 and will likely come down to support early in the year.

what does this all mean?

(2) Interest Rates Will Begin to Normalize in 2016 As Defaults Bring 'Raise the Risk'.   Bottom Line:  It will cost more to borrow money in 2016.  The FED raised the funds rate .25 basis points at the end of 2015.  I don't think they are going to do much more than that for the foreseeable future.   But that doesn't mean interest rates won't rise in the U.S.  The FED's zero percent interest rate policy and QE programs have kept interest rates at historic lows.  With both policies on hold for now and the supply of credit leveling off, interest rates will begin to revert to its natural risk pricing state.  A 'normalization'.   In this centrally planned world, the new normal is interest rates that try to price risk instead of Central Bank promises.

Risk Risk Risk.  The  risk of more defaults throughout the energy sector isn't going to help things.   Puerto Rico has already defaulted on some of its debt.  The question is who is next and how much of a risk is it for financial markets?  Interest rates on debt should be priced on Risk of default not on Zero Percent Interest Rate Policy of the FED.

Artificially low interest rates are leading us right back to another massive crisis.  Corporations that have been feeding on the 'teet' of abnormally low interest rates will starve in 2016.  Corporations relying upon additional debt to make their current debt payments will go belly up in 2016.  Countless loans handed out at the peak of the FED's 'easy money policies' will default.  Debt defaults are deflationary.  Poof.  The money is gone.

what does this all mean?

(3) The US Dollar Index will rally to a new 14 year high... and then some.  The US Dollar continues to be the cleanest pig pen in the  slaughterhouse.   While the FED has cut its biggest dollar negative policies, other central banks remain ready and willing to increase their own.  As debt defaults become more prevalent amid higher interest rates and funding issues, the demand for the US Dollar increases at a time when supply is drying up.

After breaking into triple digits for the first time in 12 years in 2015, the US Dollar recent consolidation has set the stage for a massive rally in 2016.

what will this mean for the stock market?

(4) The historic bull market in stocks and housing that started in March 2009 will come to an end.  If the current market was a house, the paint would be cracking, floors squeaking, the siding would be warped, roof shingles missing, the driveway filled with potholes, a rusted mailbox....  If this was 2007 the home owner would just take out a giant home equity loan and fix the place up.  If it was 2008 the home owner would just stop paying the home equity loan and talk nice to the mortgage company.  If it was 2015, one of the best years for housing since the housing bubble, the homeowner would sell and buy something else.  Mortgage rates have never been lower.

Which has helped fuel a 5% rise in home prices this year.

Low interest rates make that fixer upper with peeling paint and a crappy 1980's style  green tiled bathroom cheaper to buy.  That green tiled 80's bathroom doesn't look as nice when interest rates rise.  Those buying a house in 2015 are going to be underwater in 2016.

The market will come back to test the August 2015 lows.

And when that happens I think there is a good chance they will not hold.

(5) The corporate  share buyback bubble POPs -   How many corporations have been buying back their stock via debt issuance the last few years.   Why?  Because executive compensation is stock based.  The higher the stock price the higher their compensation AND   corporations view stock buybacks as an efficient use of company capital, excess or otherwise attained.    I wrote about it a year ago:

It's The Buybacks Stupid

While corporate buybacks could be viewed as a sign that all is well... just think for a second what the opposite means.  A company like $FCX recently suspended its dividend for the first time since.... drumroll.... 2008.  Look where they decided to suspend the dividend -----  after the stock declined some 75%. .. not before.  Corporations are not the smartest investors. 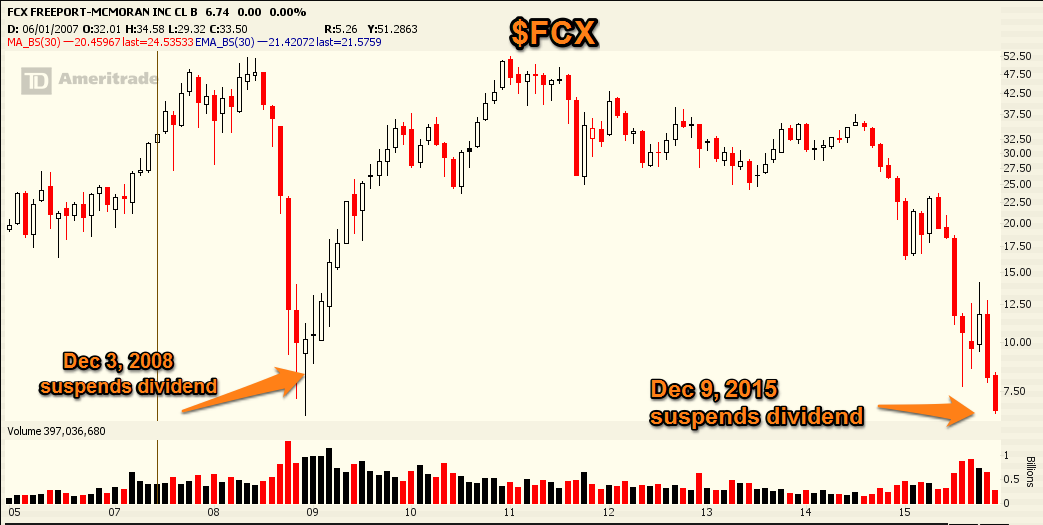 A company like Home Deport looks brilliant buying back its own stock when it keeps surging to record highs.  If Home Depot continues to increase its share buyback scheme at some point it will own all of its stock.....  but of course there will always be dilution from executive compensation... so we've got that going for us... which is nice....

At the lows during the financial crisis Home Depot was a $14 stock.  It recently surged over $135 a share.  You could argue the Home Depot share buyback machine is the smartest investor of our generation.

$14 to $135 in five years?  Who is that masked investor?  It's a bird, its a plane, noooo... why its the corporation itself.  It will be tougher , if not impossible in 2016 for corporations to finance and continue their robust  share buyback schemes.  On top of that, the buybacks have masked dilution from executive compensation.  The slow steady, relentless bid of yesterday year could easily turn into a nasty sell-off. The old stairs to the top and elevator to the basement.

This will take most of 2016 to materialize fully.  But as the market is forward looking, the selling could start earlier rather than later.  'BUY' the time these buyback machines are put on pause the trade for downside will already be in full swing.

Since the March lows in 2009 every Central Bank in the world has instituted untested, uncharted, and unprecedented policies.  Here we are 6+ years later and we are going to start seeing the consequences of these policy's.  Ultimately, no matter what the FED, ECB, Japanese, Chinese, Australians do the World is headed toward deflation.  You are already seeing it via the commodity and crude oil collapse.  While I mused previously that crude oil is 2015's landline telephone, the rout in prices has yet to hit a nadir.  The commodity meltdown is even more telling.  World Population is growing, yet demand is shrinking... prices will have to come down to meet demand.  Yet Central Banks are trying to keep prices higher to avert another collapse and financial crisis.  Perhaps they will succeed for another few years.  Perhaps, just perhaps, all those crash callers will finally be right in 2016.

My satirical take on 2016 from early last year

Have a safe and happy new year.