$SPY is going to break above the inverted flash crash record high paint job.  What do I mean by that?  The spike a few weeks ago, late in the session, a full 3% above the ask for absolutely no other reason than algo's going wild, I think that price $212.97 at the time, will get broken in early 2015.  As soon as January.   You can see the spike on the chart below:

It turns out the $SPY high of 2015 was not very far away from that mid-December paint....

The US Dollar Index will continue to rally.  As the FED contemplates raising rates for the first time since the Industrial Revolution, and central banks around the globe work tirelessly decreasing the value of their currencies, like stocks, there will be no place to go but up for the US Dollar.  The dollar has broken out of long term consolidation and looks poised to retake that 100 level in 2015. 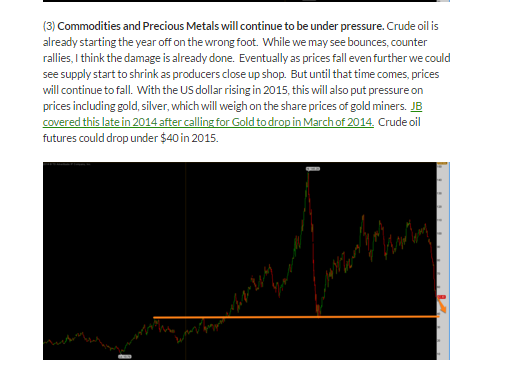 (4) Cyber Security, Network Security Firms will benefit from continued hacking.   Hackers continue to break into secure networks and steal confidential data, emails, correspondences.  They shut down web sites, take down gaming networks at the hieght  of the holiday.  They leak information, data, and threaten corporations.  I think this threat will continue to grow and the benficiaries will be cyber and network security firms.  I will be trading this via out of the money options on $PANW and $FEYE.

(5)  Bonds will continue to work the first half of 2015.  Last year inflation was supposed to rear its ugly head, bringing bond yeilds higher.  The exact opposite happened.  Inflation remains eerily low considering all the actions of central banks around the world.  Yields on bonds over seas of countries, who a few years ago were about to default of their bonds, are almost lower than government bonds here in the United States.... which is why we will see demand for US Treasuries remain strong in the first half of 2015.  $TLT, the 20 year Bond ETF, will be the way to trade this.  I think it heads to near $140 before the summer of 2015.

One think I'm sure of in 2015 - we will continue to see many people calling for a market crash in 2015, just like in 2014, 2013, 2012, 2011, 2010, and 2009.  The great thing about calling for the market to collapse in price, in all likelyhood it will happen at some point,  just like we all face the inevitability of death.  I don't think I'm going out on a limb there.....  unfortunately for some of these doomsday soothsayers, they might be dead before the Dow Jones Industrial Average hits 2,000.  Why fight the trend?  Why fight every central bank in the world?

What does it hold for us?