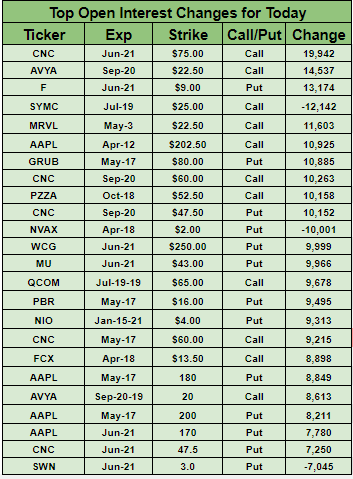 The EU will likely grant Theresa May a second delay to Brexit at an emergency summit today but the bloc's leaders are likely to demand she accepts a longer extension - until the end of the year or until March 2020 - with conditions. The strings attached would avoid the U.K. blocking key EU initiatives while waiting to leave and to make clear that the current withdrawal agreement isn't open for renegotiation. The so-called "flextension," which comes ahead of an April 12 deadline, will also allow Britain to leave earlier if the Brexit deadlock in London could be broken.

Wall Street is looking to shake off yesterday's losses, with Dow futures up 42 points ahead of the open and the S&P 500 and Nasdaq up 0.2%. The Fed this afternoon is set to release minutes from its latest meeting, when it left interest rates unchanged and abandoned all plans for future hikes this year, while Jerome Powell speaks about the economy at the House of Representatives Democratic Caucus. Busy day for central banks? The ECB is poised to keep policy on hold, taking its time to evaluate whether its most recent stimulus is enough to arrest a rapid decline in sentiment.

Canada is "constantly looking at ways to refresh the [tariff] retaliation list [against the U.S.]... to have an even greater impact," Foreign Minister Chrystia Freeland told reporters, adding to the recent trade tensions taking place across the globe. David MacNaughton, Canada's ambassador to Washington, told U.S. agricultural reporters on Monday that Canada could announce a new list of targets as soon as next week, which would include a significant number of agricultural products.

Renewed tensions between Italy and Brussels

Italy's populist government has conceded it won’t hit the budget-deficit target agreed on with EU authorities, setting the stage for another standoff with Brussels. The finance ministry said this year's deficit will be 2.4% of GDP, rather than 2% agreed upon in December after tense negotiations. Those discussions resulted in a rise in borrowing costs for Italian banks, businesses and households, reviving memories of the eurozone’s 2010-12 debt crisis, from which Italy has yet to fully recover.

Hong Kong's stock market capitalization overnight surpassed Japan's for the first time since the Chinese equity bubble popped in 2015. It makes the territory's equity market the world’s third largest in value at $5.78T, behind only the U.S. and mainland China. Boosted by internet giant Tencent Holdings (OTCPK:TCEHY), the Hang Seng Index has climbed 17% so far this year vs. the 8.2% advance of Japan's Topix Index.

President Trump will issue an executive order today that aims to prevent states from blocking pipelines and other energy infrastructure by using authority granted to them under the Clean Water Act. It represents a shot from the White House in the continuing battle between beltway Republicans and Democratic governors opposed to fossil fuel developments in their states and is expected to be challenged in court.

In a deal reported to be worth tens of millions of dollars, Netflix (NASDAQ:NFLX) is making a major play for the Egyptian Theatre in Hollywood. Owning the cinema would allow Netflix to more easily showcase films that it wants to put up for Academy Award contention without dealing with traditional theatrical release windows. Hollywood producers and AMPAS have suggested banning streamers from the Oscars, although the DOJ has suggested the move could violate antitrust law.

Uber seeks about $10B in year's biggest IPO

Uber (UBER) is aiming to raise $10B through its initial public offering next month, in a listing expected to be one of the biggest technology IPOs of all time, FT reports. The company will make its registration documents public tomorrow and an investor roadshow is scheduled to kick off on April 29. Uber then aims to list its shares on the NYSE on May 9. In addition to ride-hailing, its businesses include bike and scooter rentals, freight hauling, food delivery and an expensive self-driving car division.

Shareholders are suing the U.S. planemaker for alleged securities fraud violations and concealing safety deficiencies in its 737 MAX planes, whose fatal crashes and grounding led to a $34B market value tumble. According to the complaint, Boeing (NYSE:BA) "effectively put profitability and growth ahead of airplane safety and honesty" by rushing the 737 MAX to market, while its growth prospects were undermined by an alleged conflict of interest from retaining broad authority from the FAA to assess the plane's safety. On Tuesday, Boeing said Q1 aircraft orders fell to 95 from 180 a year earlier, with no orders for the 737 MAX following the worldwide grounding.

The F-35A aircraft that crashed last night over the Pacific Ocean near northern Japan was the first one to have been assembled by Mitsubishi Heavy Industries (OTCPK:MHVYF), an Air Self Defense Force official told Reuters. The pilot had not reported any problems with the jet before contact was lost 28 minutes into the flight. The incident could reignite concern about the F-35 having only one engine and comes as manufacturer Lockheed Martin (NYSE:LMT) competes for orders in Finland and Switzerland against the twin-engined Eurofighter Typhoon (OTCPK:EADSY, OTCPK:BAESY, OTCPK:FINMY) and Boeing's (BA) F/A-18E/F Super Hornet.

The biggest risks that abound in the markets, by far, are now in Europe, says contributor Mark J. Grant.

JetBlue (NASDAQ:JBLU) appears to be gearing up for service across the Atlantic.