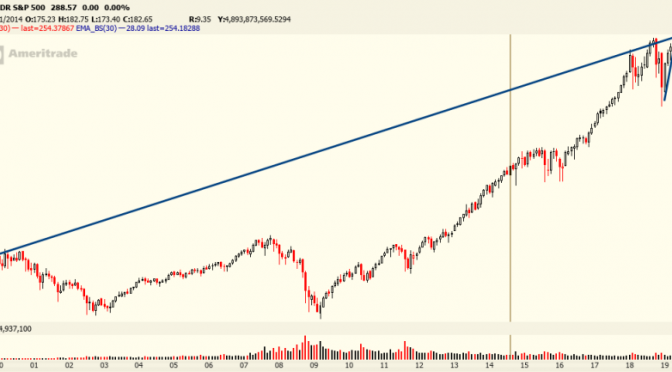 It was January when the indices were just beginning to crawl back from the worst years of losses since the Financial Crisis, that I mused the 2019 would see new record highs.

A few weeks  later with $SPY at $265 the move from the Christmas eve lows was being dubbed one giant bull trap, and again I thought we'd bull trap our way to new record highs.

Here were are. This fake, manipulated, centrally planned market is just a stones throw away from record highs.  It's flying higher in face of every negative headline.  Some are the same old headlines, like Brexit, Debt Ceiling, Government shutdown, trade war, and others are headlines we haven't seen since the last recession.... like the dreaded inverted yield curve!  There remains so much ammunition for the bears to back up their giant red down arrows.

You want to scream even more?  I guess this actually is more of a head scratcher  than a scream invoker.

The S&P500, Dow , Nasdaq, Russell all could be heading even higher.... imagine that.   And sure enough Barrons is out this weekend saying the same thing.....

Of course that doesnt sound ground breaking today, with stocks near record highs, saying that more gains are on the way.  But how many were saying that even just a few months ago?

When  the market was moving off its lows at the start of this year I noted how we were seeing a positive momentum trigger for the first time since the lows in....2016... and that not only would we move higher but we could see a similar type price action to the one we saw off the 2016 trigger.  Not just a rally to new record highs, but even perhaps...gasp.... another multi-year move.

More record highs?  It was unthinkable just a few months ago for most of the market participants.    And yet here we are, defying all the odds including the 100% lock, guaranteed,  never fail, always right, recession indicator - the Inverted Yield Curve.

Why is this market going to keep moving higher?   Cheap money is sticking around a lot longer.  Call this market manipulated,  Cite the plunge protection team for ramping the market higher despite a lack of buyer.  Is the PPT responsible for the Jobs report or GDP?   For the bears everyone is to blame except themselves.

This morning features another wonderful marketwatch piece.   I guess when you become the home to bears who have been short, negative, and or out of the market since 2009, you get an aweful lot of head scratching.

The gentleman's face about sums it up for those who were selling short when Marketwatch headlines called this most recent rally a BULL TRAP a few months ago.

How the heck?  This market was supposed to crash when Trump was elected president.    Perhaps its the record amount of corporate buybacks helping to lift the market?

Just think how happy Mr. and Mrs.  Sharebuyback were in December buying back their stock at discounted prices, while mom and pop were in a panic selling in anticipation of the next market crash.

What about that 112th Hindenbrug Omen!??  We haven't heard from ole Hinden buddy in a long long time.  Perhaps its time to dust that one off.....

And isnt that something we always hear from the bear contigent.   The FED is going to mess it up.  Its going to end badly.  Really?

"FED driven rally is about to end badly"

followed by a giant S&P500 chart with two lines and a giant RED arrow.

As if a line drawn on a digital chart is more powerful than a Central Bank with a no limit credit card.

"25 years of resistance has proven to much amid this (<<<<please consult thesaurus for fancy words to attempt to add  even more credence to your bearish perspective>>>>) world of Central Bank Manipulation.

Anyway..... enough... I'll stop it there.  The bearish perspective is certainly welcome.    It is easy to hate this market when it's made a once in a lifetime rally despite all those RED down arrows.

Below are some of the pieces I wrote earlier this year as the market was bull trapping its way higher.  But before I go if you have time read this article about Australia.

28 years without a recession?  Wow.   What if our current expansion lasts 28 years?  That's a whole lot of failed RED arrow charts we have to endure over the next 18 years....

Friday Focus: Where Is the Market Headed?