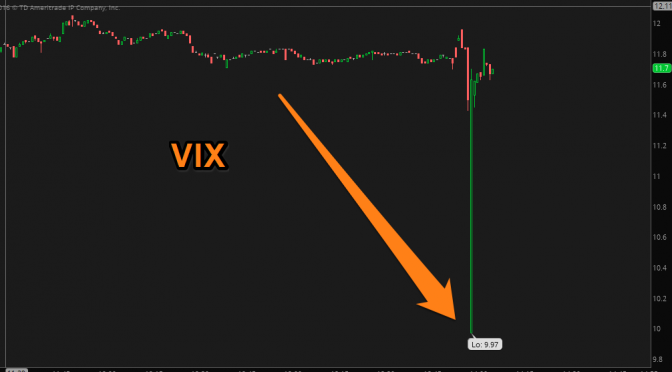 Yesterday just seconds after the FED released one of its least anticipated statements since the financial crisis, the VIX plummeted to a new post financial crisis low.  It broke below that 10 figure.

It's an hour until the open and all through the  market, banks had lots of cash but no where to park it.  Yields were too low,   stock prices at record highs, this has to fall apart at some point, why should I buy?

The market is safe, they said with a grin Lehman is gone and Enron is a has been.  So hold up your nose, and nod your big head, just buy up those stocks, volatility is dead.

And I heard her exclaim as she flapped her wings until she was out of sight,  Low interest rates for all, and for all a good night

Yesterdays brief move under 10 was the shoulder shrug to rule them all.  Sure the VIX popped back up after breaking below 10.  But it will be back.   It will be back....

VIX single digits for the first time since 2007 - 9.97 pic.twitter.com/UTFuvgjqjp

and yet yesterday it falls to a new 10 year low.

THE VIX Is IN!

The Low VIX reading continues to point to a market that just doesn't care, and thus far its been for good reason.  Prices sit near all time record highs.  Anyone who shrugged off every named excuse to sell has  done quite well since the March 2009 lows.

Was yesterdays 9.97 shrug the nadir for the VIX?  Was the the proverbial blow off bottom for the VIX?

Only time will tell for sure, but if you've followed the VIX for any length of time the last 7+ years you know these odd 'paints' have a habit of getting filled.

Which means the VIX is heading back under 10 in the short to medium term.  And the shruggers will keep on shrugging their way to fresh record highs.