The US Dollar was up well over 1% today and amazingly enough the market was able to post gains as well.  These are the type of gains I don't mind.  When the FED is purposely killing the USD to prop up asset prices... I don't like that.   The Big Ben Copter dumping freshly minted USD on the market to artificially inflate assets, in my opinion, is not sound policy.   When stocks and the USD go up in unison, that's great news.... or is it?

I've been against Ben Bernacke since QE Zero.  From December 2008 until now he's done everything in his power to screw each and every honest middle class saver out there.  The ones who lived within their means, who save their money, who don't trust the roulette wheel of a stock market, Bernacke just laughs at us.    His excuse has been that we will all be better off once the economy recovers.  And to a degree he's right, we will all be better off.  But if the economy does indeed recover what is he going to do when interest rates get out of his control?  The Fed's huge balance sheet... how is he going to unwind it all?  Who is going to take all those bonds off his hands when the stock market and every other asset is inflating far beyond expectations?

Today's job report was great as we are somehow sprouting jobs.  The result of today's jobs report was a big up day for the US dollar.  It didn't help with the 1AM news out of Greece.  Greece defaulted on their debt which was ruled a CDS event.  No shit!  We all knew this day was coming.

The initial debt swap announcement at 1AM saw the USD gain strength and the EUR drop.   The jobs report saw the USD gain further strength with the YEN being the prime beneficiary of USD strength.  Magically stocks ramped higher as well.  Ben Bernanke was donning the star studded Fantasia cap today.

Levitating the stock market and the USD.... it was quite a feat.   the question now... how  much longer can he keep this up?

With positive jobs reports QE3 is becoming less likely.  With LTRO, Japenese, UK central banks printing, the USD might see further strength, which could ultimately come back to haunt stocks.  We have solid jobs data, economic data, and a FED that will keep ZIRP until at least 2014 ,the question now who is going plant their money in low yielding bonds and assets?  The risk of another recession is gone (according to recent data)  and those piling into low risk assets will head out in search of yield, be it stocks, junk bonds, anything to surpass savings.  That could create a very serious problem for the FED.

The FED has been buying up debt from the Treasury with magically fabricated US dollars.  Ben Bernanke waves his wand and a few billion USD magically appear to buy US treasury bonds.   This is keeping rates at historically low levels.  The plan is to keep rates low so people can buy a house or refinance their mortgage.  What Ben Bernanke doesn't seem to fully grasp is that we have over 8% of the country unemployed.  You need a freaking job to get a mortgage or to refinance.   You need good credit, you need a respectable down payment.  That is how the system should work.  We got into this mess by giving anyone who can fog a mirror a loan and a house they couldn't afford.   Why does it feel like we are recreating this again?  Ben Bernanke the few that have a job have already taken advantage of these artificially low rates.  We have already refinanced, we have already bought a house, the reason the market isn't recovering is because there is no one left to buy, no one left to refinance.  Operation twist ultimately is doing nothing for the average homeowner, what it is going to do is make the FED's job more difficult down the road. I think the FED is ultimately F*CKED.    Sure they can print money until the cows come home and try to work their magic.  But ultimately the market will have the last say.  The FED can only control interest rates for so long.  With a recovering economy, weakness in Europe, and central banks across the globe printing money, the USD could see a nice rally and drag interest rates up with it.  This will make the FED's life a lot more difficult if they ever decide to unwind their unconventional stimulus.  That day may never come as QE4,5,6,7,8,9,10 paper over the house of cards the FED has built.  I don't think the trillions of QE and stimulus will ever be unwound.  QE is like crack for these markets.  Any mention of QE withdrawal will send the markets crashing and that doesn't fit the Feds price stability mandate. 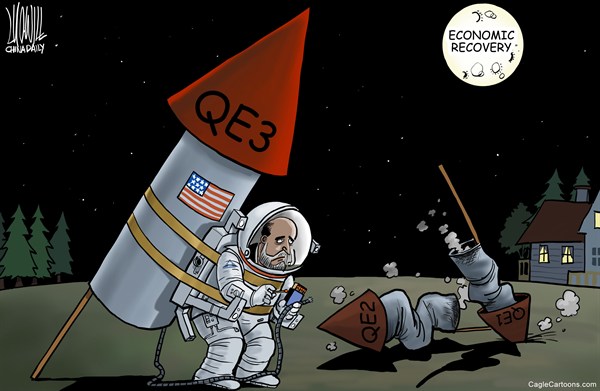 5 thoughts on “US Dollar Strength? The Fed Is F*cked”