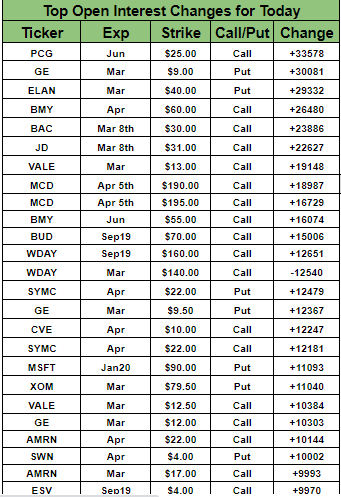 At the opening of China's National People’s Congress, Premier Li Keqiang said the nation must be prepared for a "tough struggle" as it faces a "grave and more complicated environment." On that note, he cut the country's economic growth target this year to 6.0%-6.5%, lower than the GDP growth of 6.6% in 2018, the slowest pace since 1990. The Shanghai Composite still climbed 0.9%, boosted by the billions of dollars in planned tax cuts and infrastructure spending needed to boost the economy.

Looking to counter "unfair trade practices," President Trump has decided goods from India and Turkey are no longer eligible for preferential, tariff-free access to the U.S. market. India played down the impact of the move, saying it was keeping retaliatory tariffs out of trade talks. The country has currently been exporting $5.6B worth of goods to the U.S. duty free under the GSP program.

Wall Street ended Monday on a negative note as investors shrugged off trade optimism and digested weaker-than-expected construction data, with spending falling 0.6% in December. Turning things around? Dow futures are now ahead by 56 points, while futures on the S&P and Nasdaq are pointing to a narrowly higher open. The tail end of Q4 retail earnings is also on tap for today, with Target (NYSE:TGT) and Kohl's (NYSE:KSS) set to report results before the bell.

With 24 days to go until the U.K. is scheduled to leave the EU, Brexit Secretary Stephen Barclay and Attorney General Geoffrey Cox head back to Brussels today in search of guarantees over the backstop plan to avoid border checks in Ireland. If the mission is successful, Theresa May has a chance of getting her Brexit deal through Parliament next week, allowing for an orderly divorce. If not, Brexit will likely be delayed.

Greece today will mark a milestone in its recovery from a bruising financial crisis when it sells 10-year debt for the first time since March 2010. The country has so far received more than €10B of orders for the syndicated offering of 2029 notes, according to an Athens bourse filing. Prime Minister Alexis Tsipras has pointed to bond sales as proof the country has turned a corner and is back on its feet.

Barrick Gold CEO Mark Bristow is willing to talk with Newmont Mining (NYSE:NEM) about a potential deal to work together in Nevada, but Barrick (NYSE:GOLD) has to control the joint venture, FT reports. However, neither side seems to agree on the full value of the Nevada assets. Earlier on Monday, Newmont rejected Barrick's full buyout offer and reiterated its plans to go ahead with its deal to buy smaller rival Goldcorp (NYSE:GG).

Direct air capture technology? The world’s biggest coking coal producer BHP has bought a $6M equity stake in Canada's Carbon Engineering, which sucks carbon dioxide from the atmosphere. Alone among the major miners, BHP has a target of net zero emissions by the second half of the century, in line with U.N. carbon-cutting goals. But the effort is gathering pace, with Glencore (OTCPK:GLNCY), the world’s biggest producer of seaborne coal, saying last week it will cap coal production.

Painkiller stocks fell yesterday in response to a report that privately held Purdue Pharma is mulling a Chapter 11 bankruptcy filing. The move would help it protect itself from the approximately 2,000 related lawsuits against its marketing practices for OxyContin, the "poster child" painkiller in the U.S. opioid crisis. More than 1,600 of the cases are consolidated in an Ohio federal court. Related: ENDP, INSY, TTNP, RDY, MNK, PRGO, ABBV, OPNT, AGN, TEVA, ALKS, PTIE

A Tokyo court has granted bail to ousted Nissan (OTCPK:NSANY) Chairman Carlos Ghosn more than three months after his arrest for alleged financial crimes, on condition he submit to video monitoring and stay in Japan. While prosecutors appealed against the decision and demanded the architect of the Renault-Nissan automaking partnership remain in jail pending his trial, Nissan declined to comment.

Volkswagen will pay around 100K employees on collective wage deals a 2018 bonus of €4,750 each, the largest such payout since 2015. A newsletter to staff said the size of the payment should not be read as an indicator of operating profits at the Volkswagen (OTCPK:VWAGY) passenger car brand because commercial vehicles were also included in the scheme, and the number of workers on part time contracts who receive less must be taken into account.

The Pentagon has awarded Lockheed Martin (NYSE:LMT) $946M on behalf of the Kingdom of Saudi Arabia for THAAD, which is regarded as America's crown jewel in missile defense systems. The multi-million dollar award is the first installment of what is expected to be a $15B deal. It comes days after U.S. deployed THAAD in Israel for the first time in order to "deal with near and distant threats from throughout the Middle East."

Google will ban political advertising on its platform before the Canadian federal election after the country introduced stringent transparency rules. Bill C-76 requires online platforms to keep a registry of all political and partisan ads they directly or indirectly publish. Google's (GOOG, GOOGL) services like enhanced search results and platforms, including YouTube, will still be available during the campaign period.

Is Project Dragonfly dead? Google (GOOG, GOOGL) employees have reportedly carried out their own investigation and are concerned that the censored search product for China is still ongoing despite signs it had "effectively ended" in December. The group identified around 900 changes to Dragonfly-related code over the last few months and saw that about 100 workers were still grouped under the budget associated with the project.

Less than a week following its delayed launch in India, Spotify (NYSE:SPOT) has drawn more than 1M unique listeners in the country, Billboard reports. That's across paid and free tiers, and the company hasn't yet offered a breakdown there. The launch even came without recordings from Warner Music Group (one of the big three labels) amid an ongoing dispute between the two.