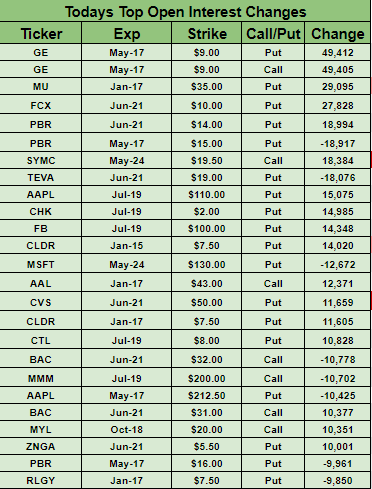 Equities in Asia fell overnight, playing catch-up to yesterday's selloff on Wall Street, which saw the Dow dive 617 points as China retaliated against new U.S. tariffs with its own $60B in levies on American imports. There's now a refreshing sea of green being seen across major European markets, as well as in the U.S., with DJIA and S&P 500 futures up 0.7% and Nasdaq ahead by 1%. Some optimism? President Trump has not ruled out the prospect of a trade accord being reached within weeks and said he was prepared to meet Chinese President Xi Jinping at the coming G20 summit in June.

Another round of aid for U.S. farmers

The Trump administration is planning on providing about $15B in aid to help U.S. farmers whose products may be targeted by the newly unveiled Chinese tariffs. The group has been among the hardest hit in the trade war, with U.S. soybean futures falling to their lowest in a decade on Monday and shipments of the most valuable U.S. farm export to China dropping to a 16-year low in 2018. A new aid program would be the second round of assistance for American farmers, after the Department of Agriculture's $12B compensation plan last year.

Walmart (NYSE:WMT) is firing back against Amazon (NASDAQ:AMZN), which on April 25 promised one-day delivery for all Prime members and announced it would spend $800M toward the shipping goal in the second quarter alone. Walmart's service will begin in Phoenix, Las Vegas and Southern California, with expansion plans of reaching roughly 75% of American consumers by the end of 2019. While customers won't have to be part of a loyalty club, orders have to be worth at least $35 to qualify.

That means lots of deliveries

In need of more drivers, Amazon (AMZN) is offering $10,000 and three months of pay to its employees who quit to start delivery firms. Demand for so-called last-mile delivery is booming as more Americans shop online, but drivers are increasingly scarce due to the tightest U.S. labor market in 50 years. As the program grows, Amazon is likely to cut back on the amount of business it gives to the other big competitors, directing fewer packages to UPS (NYSE:UPS), FedEx (NYSE:FDX) and the Postal Service.

While it was trading under $6,000 just over a week ago, Bitcoin (BTC-USD) is continuing its record run, soaring over 16% overnight to $8,175 amid a broader crypto rally. Some bullish news was seen from Microsoft's (NASDAQ:MSFT) decentralized project, Ion, on Bitcoin blockchain, as well as Bakkt's Bitcoin Futures contract launch in July. Another reasonable speculation is major institutional money flowing into cryptocurrencies as managers seek some hedges while U.S. equities sell off.

A Northern California jury has ordered Bayer (OTCPK:BAYRY) to pay more than $2B to a couple who say they were diagnosed with cancer after using the company’s glyphosate-based weedkiller Roundup. Bayer said it was disappointed with the jury’s decision and planned to appeal, adding that it "conflicts directly" with the EPA's finding that there are "no risks to public health from the current registered uses of glyphosate." It's the third lawsuit the company has lost related to Roundup, an herbicide produced by Monsanto, which Bayer acquired last year for $63B.

Apple (NASDAQ:AAPL) shares slipped 5.8% yesterday as the Supreme Court ruled against the tech giant in its App Store antitrust case. Hundred of millions of dollars in penalties are at stake in the issue. While four iPhone owners had sued the company saying it had unlawfully monopolized the aftermarket for apps, Apple had tried to dismiss the suit saying the owners couldn't sue because they weren't direct purchasers.

Facebook (NASDAQ:FB) is hiking its $15 minimum wage for all U.S. contract workers - up to $22 in some areas - committing to a "higher standard that better reflects local costs of living." WhatsApp has confirmed that its phone conversations could have potentially been tapped by a third party amid reports outlining allegations that Israel-based NSO Group was able to successfully install malware. Lastly, Joe Biden announced he would be open to breaking up Facebook, marking the latest Democratic presidential candidate to press for greater regulation of prominent Silicon Valley companies.

Vodafone (NASDAQ:VOD) has slashed its annual dividend by 40% to €0.09, reversing a pledge to maintain the payout in order to secure enough firepower to build 5G networks and complete its acquisition of Liberty Global (NASDAQ:LBTYA) assets. Nick Read, the former CFO who has been in the top job since October, said the decision had not been taken lightly. Yesterday, Vodafone agreed to sell its New Zealand operation for an enterprise value of €2.1B, to a consortium of private equity including Infratil (OTC:INFTY) and Brookfield Asset Management (NYSE:BAM). VOD +2.6% premarket.

Uber (NYSE:UBER) shares fell another 11% on Monday, more than doubling their losses since the ride-hailing giant's poorly received market debut. CEO Dara Khosrowshahi said he expected the stock to remain under pressure in the coming months, but "we have all the capital we need to demonstrate a path to improved margins and profits." Investors have also struggled to figure out how much Uber and Lyft (NASDAQ:LYFT) are worth, given both companies have not estimated a timeline for turning a profit.

Approval for CVS-Aetna merger may come after final hearings.

Contributor Dividend Sensei discusses portfolio changes that will profit from the trade war.