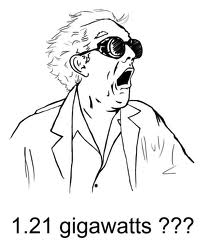 Today's $TSLA headline that helped propel the stock to fresh record highs, brought me back to the very first, and the finest, Back to The Future movie.

1.21 GIGAWATTS!!! Dr. Brown practically pulls his hair out of his head.

$265 a share? The shorts have been pulling the hair out of their heads on $TSLA for over a year. In all my videos, charts and posts since early last year I have stated that $TSLA was going to head over $200. Last summer, I stated the stock was going to $250, then $300 and then $450 before a 10-for-1 forward split will take the stock to the $45 BofA/ML price target that they have curiously not reaffirmed during $TSLA's recent explosion higher.

Here are some of my previous videos. After watching these you may think I drove Dr. Brown's DeLorean into the future to predict the price action of $TSLA.

Unfortunately, I have no way of harnessing 1.21 GIGAWATTS!! At least, not until Tesla's $5 billion $TSLA Gigafactory is built.