When $TSLA was making its way to almost $200 per share I was one of the more vocal bulls. I was also the first to bring the 3rd fire to traders, which was the breaking point for the stock. Recently, $TSLA broke to new lows but has held support and looks ready to recover to at least the $135 price level, short-term. 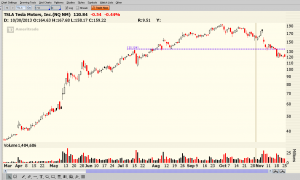 The $135 level was a key support, and now that it's broken below that level the $135 price is a key resistance for $TSLA. The last 5 trading sessions have also seen the stock showing strength. It didn't break any further, and I see a sharp rally coming in the short term. So: how will I position myself for this rally?

This week's $126 calls last traded for .76. I'll be looking to get into these tomorrow morning.

If I open a position on $TSLA, I'll let you know in the chat room and via private twitter.

The bottom line, in my opinion:  $TSLA has bottomed at current prices and is poised for a short-term rally to at least $135 per share, and it will be a very profitable trade when the move does occur. I intend to capitalize on the impending move via out-of-the money calls.