When $TSLA was trading quietly in the mid $20's last year, not many were talking about the stock. The talking was done by investors with their money. At that time over 30 million shares were short $TSLA.  In hindsight shorting $TSLA at that time was one of the dumbest investments you could have made, yet investors and traders were drooling at their $TSLA short.   They were expecting it to drop to $10 a share back then.  They were expecting $TLSA to collapse with the stock at $27!  11 months later the stock is at $166 and guess what?  The shorts still expect the stock to collapse!

The shorts think anyone buying $TSLA at $166 is insane, yet the shorts have been calling for a massive collapse since $27 and have been wrong every single day?  That is the definition of insanity "doing the same thing over and over again and expecting different results.".  The bulls buying $TSLA since $27, on the other hand,  are sane and making money.

Last week we had an NYU professor chiming in and saying "fair market value of $TSLA is $67.12". Fair Market? Since when has the stock market been a "fair market"? Anyone using their classroom knowledge to traded stocks short in $AMZN at $100, $LNKD at $70, and $NFLX at $30. How has that worked out?

Last night on Seeking Alpha a post titled "Is Tesla Motors About To Take The Elevator Down?"  was submitted.  In that post, the author supports short position on $TSLA by citing the names of analysts and market participants who have been wrong the entire time on $TSLA.  Even a broken clock is right twice a day.  If you wake up each day shorting $TSLA at some point you will be right, it can't go up forever..... right?

We have Merril Lynch BOA analysts sticking to their $39 target and reiterating it two months ago, I hope their clients didn't double down on their short positions since then. There is a better chance of $TSLA going to $390 and doing a 10-1 forward split then the stock seeing $39 again.

Every single analyst has been wrong on the stock except the few like Dougherty and Northland Capital who have a $200 or better target on the stock.

When a stock rallies like $TSLA has this year, everyone wants to be the one who called the top. The stock is up over 450% during the last year, they can't envision a stock that just keeps rallying. At some point $TSLA will pull back. Maybe the decline will be of an "elevator down" variety.  However I think  the big pull back that everyone is waiting for will happen from higher prices and after more analysts and articles try to call the top for this stock.

Just two days ago with $TSLA down over 4%, the stock hit a double bottom at $158.50. I alerted this bottom via my private twitter feed, and also bought call options at the $170 strike.

Those options went over $2.30 yesterday.  Don't fight the trend.  The trend is up.

I am biased toward the upside because I know stocks can go much higher than any analyst, author, or trader thinks it can.  A stock like $TSLA is more likely to irrationally overshoot everyone's expectations, than to succumb to rational analysis. 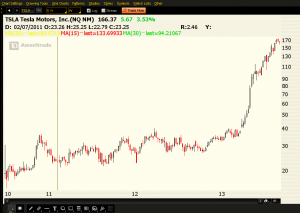