You buy the ETF GLD because it tracks Gold and you think GOLD is going up.  During the trading day if gold goes up GLD goes up.  You buy SLV knowing that if the price of Silver goes up SLV will go up to.

You see one night, awful data out of China and even worse economic data out of Europe,  you know it going to be a volatile day.  First thing you do is buy TVIX, which is SUPPOSED to give you a double return on market volatility.   The VIX goes up over 6% on the day.. TVIX?  Goes in the exact opposite direction.  TVIX actually falls some 30%!  Truly a spectacular move in the complete wrong direction.  For those expecting a 10-12% return they instead got taken to the woodshed.  How can this happen?  TVIX holders  should have been sitting on profits today, instead they got completely manhandled.  TVIX dropped 30% in one day!

For any ETF, ETN or financial product to do the exact opposite of what is supposed to do... its broken.  It doesn't work.  How can you compile a prospectus and tell investors that your product will do one thing, when in fact it will do the opposite. 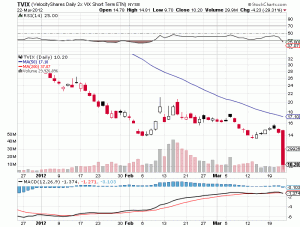 VXX also took a tumble late in the day as investors are losing faith in these products.

It turns out one of the main reasons for the fall is tonight's release which was obviously leaked to key market participants.  Wouldn't it be nice to have all the information early, instead of having to wonder what the heck is going on?  Would you be buying a dip if you were privy to information that was not yet made public?  This market reeks.

Credit Suisse Group AG (CSGN), under pressure to restore order to an exchange-traded note tracking U.S. equity volatility, said it will start resupplying the market with shares today after cutting issuance off in February.

Stock will be added to the VelocityShares Daily 2x VIX Short-Term ETN (TVIX), or TVIX. The security, designed to track futures on the Chicago Board Options Exchange Volatility Index, has whipsawed investors for the past month, climbing 89 percent above its asset value before plunging 29 percent yesterday.

Credit Suisse said the first round of issuance is aimed at lowering the cost of borrowing shares to the level seen before the Feb. 21 suspension. Photographer: Gianluca Colla/Bloomberg

Creating shares in the ETN will help bring the security back in line with its so-called indicative value, the price implied by futures on the CBOE gauge, said Alec Levine, an equity derivatives strategist at Newedge Group SA in New York. Credit Suisse’s first round of share creation is intended to lower the cost of borrowing the note, a step that may aid short sellers who yesterday helped cut the premium by 66 percent even as owners of the security were burned.

“Lending out shares is an attempt to drive down the premium,” Levine said yesterday in a phone interview. “When your product isn’t trading anywhere near NAV, it’s the market telling you that it’s a broken product.”

Returning the ETN all the way to its asset value of $7.83 would result in a decline of 23 percent from yesterday’s close, according to data compiled by Bloomberg. Katherine Herring, a spokeswoman for Credit Suisse in New York, declined to comment beyond the statement.

The announcement followed a series of actions that caused the note to break loose from its reported value before falling yesterday as traders speculated issuance would resume. Credit Suisse halted share creation on Feb. 21 after surging demand for securities tracking volatility swelled the note’s market value to almost $700 million from $162.8 million at the end of 2011.

The Daily 2x VIX note fell to an all-time low of $10.20 at 4 p.m. New York time in 2.6 times its average trading volume for the past three months, and slipped to $9 in after-hours trading. The drop reflected short selling amid speculation new shares would come into the market after the ETN climbed to record premiums each of the last four days, said Chris Hempstead, director of exchange-traded-fund execution service at WallachBeth Capital LLC.

“It’s not overly surprising given what happened to TVIX during the trading day,” said Dominic Salvino, a specialist on the Chicago Board Options Exchange floor for Group One Trading, the primary market maker for VIX (VIX) options. “They weren’t forced to do this in a legal sense, but there were some reputational questions for them given the fact that product was performing so poorly and was no longer doing what it was meant to do.”

Volume was 30.2 million shares yesterday, almost 8 times the daily mean since it was created in 2010. The note closed at $14.43 on March 21, or a record 89 percent above its so-called indicative value. The gap narrowed to 30 percent yesterday as the security extended its decline since Oct. 3 to 90 percent.

Unhinged trading in the VelocityShares ETN is the latest controversy for exchange-traded funds and notes, which had about $1.2 trillion in assets at the end of February, according to the ETF Industry Association. The European Commission said March 22 that it is examining potential “conflicts of interest” affecting the securities. Laurence D. Fink, chief executive officer of BlackRock Inc., warned in November that investors may not understand the assets that back certain funds.

“These volatility ETFs will be closely monitored by the equity derivatives industry, especially when volatility is once again on the rise,” Stuart Rosenthal, chief executive officer of Factor Advisors LLC in New York, said yesterday in a phone interview. “I don’t think we have heard the last word about TVIX creations and for that matter volatility ETFs.”

In yesterday’s announcement three hours after the close of trading in New York, Credit Suisse said the first round of issuance is aimed at lowering the cost of borrowing shares to the level seen before the Feb. 21 suspension. In a short sale, a trader borrows stock and sells it, hoping to profit from a decline by replacing it at lower prices later.

“Credit Suisse may from time to time issue the ETNs into inventory of its affiliates to make the ETNs available for lending at or about rates that prevailed prior to the temporary suspension of issuances of the ETNs,” the company said.

The number of shares sold short in the Credit Suisse note was 4 million at the end February, up from less than 1.5 million at the end of 2011, according to data compiled by Bloomberg. The ETN fell 83 percent from Oct. 3 to Feb. 29.

Starting March 28, shares will be issued to authorized market makers. Normally, banks create and redeem ETNs based on the level of demand for the securities. That demand usually doesn’t affect the price since the ETNs track an index.

The gap between the security’s price and the value of the index it tracks has widened since Credit Suisse suspended issuance of new shares, causing a supply shortage amid record demand for volatility products that provide a hedge against U.S. equity losses. Short sellers may have accelerated bets against TVIX yesterday on speculation Credit Suisse would resume issuance of more shares, said WallachBeth’s Hempstead.

The VelocityShares ETN aims to produce twice the daily return of the S&P 500 VIX Short-Term Futures Index, which tracks a trading strategy involving futures on the CBOE Volatility Index. The VIX, as the CBOE gauge is known, is used as a benchmark measure of U.S. equities derivatives and measures the cost of protection from losses in U.S. stocks. It rose 2.9 percent yesterday.

Credit Suisse’s decision to halt new issuance of TVIX shares preceded a period in which the ETN began moving independently of its underlying assets. The S&P 500 VIX Short- Term Futures Index lost 32 percent between Feb. 21, the day of the suspension, and March 21. That was more than twice the decline in the ETN.

The faster decrease in the underlying index contributed to a widening in the premium of the TVIX to its underlying asset. The gap reached a record 36 percent on March 16 and then expanded to 62 percent, 78 percent and 89 percent in the next three days, according to data compiled by Bloomberg.

“Investors should probably remained sidelined until TVIX has returned to its NAV and stabilized there,” Jim Strugger, a derivatives strategist for MKM Partners LLC in Stamford, Connecticut, said yesterday in an e-mail.

To contact the reporter on this story: Nikolaj Gammeltoft in New York at ngammeltoft@bloomberg.net