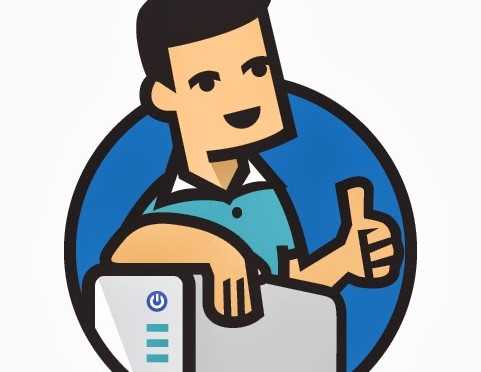 At the height of the Tech Wreck of 2014, I noted that the "... pull back, and the tech weakness has an excuse.  It’s just not the one that sells advertising time on the networks."  The excuse was taxes.    I was not alone in blaming tax season on the sell-off, but it certainly wasn't the headline you were seeing in the financial media.  Nervous, worrisome, troubling,  were just a few of the words that I was seeing thrown around to describe the market conditions of early April 2014.

Was it just another pull back or were the markets at a precipice?  Those who have been calling for a market crash every year for the last five years saw the recent pull back as the long awaited bubble bursting.  "This is it!", claimed the paw-less, one toothed, blind, and emaciated bear as he pushed  his last $50 into a fresh $LNKD short position.  "I've been shorting this stock every month since it was $60 - I'll be darned if I miss out on the big drop".  Sage advice from an old bear....

Oddly enough, as this "massive bubble" was 'bursting' the market kept its cool.  Sure prices dipped and volatility was increased, but there was never that panic sell-off.  Whatever money that wasn't being used to pay a tax bill, was put into more stable blue chip stocks like IBM, MSFT, and even AAPL.

I think as Tech stocks stabilize and begin to rally we could see the money flow back into them.  As with any rally, it pays to be in before the herd.  The great Tech Wreck of 2014 has offered, in my opinion, another great opportunity to go long some tech names into the summer.  Could we see another big sell-off in Tech stocks, absolutely.  Anything is possible, however  I see a bullish pattern developing for $QQQ which gives an accurate representation of the Tech sector.

The  broadening descending wedge is a bullish continuation pattern and the $QQQ looks poised to break out of it to the upside in the short term.  It is also trading above trendline support. 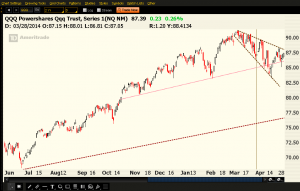 The Wreck that was Tech has been repaired.

One day in the future a weak,  half horned, one hoofed bull will push his last $50 into an $AAPL long position as the stock plummets to multi-year lows.  I don't think that day is coming too soon.