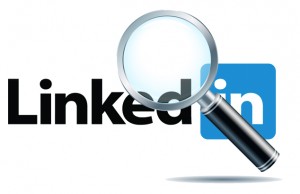 It was 6 months later then we expected, but LinkedIn (LNKD) finally hit the $150 target we have been calling for since early spring. It wasn't an easy ride, and there were plenty of bumps in the road, but in order to win in this rigged market, one needs to have conviction. Here are some of our posts over the past year on the issue : August ; May ;  April ; March ; and February .

If there is one thing bears can learn from this is that fundamentals do not always tell the story. Folks have been clamoring for a pullback ever since the P/E ratio eclipsed 700. Next it was the bears warning folks about the 'alarming' amount of insider sales. Do you invest money in the directors ability to value the company, or to return shareholder value??!??!?!?  Bears were doing the former and obviously had it wrong.

Our conviction allowed us to purchase some Feb 16th $145 calls before the close on Thursday at .41 which we alerted to our chatroom as well as private twitter feed: 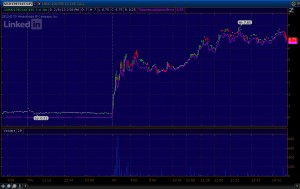 We put the weekly LinkedIn(LNKD) calls on our watchlist in the morning as a risky trade, as they expire the same day. But thought they might offer a good risk vs. reward scenario. We have a Dittotrade.com account where followers get in on our trades automatically , and were able to get some good positions at the open on the 145 and 150 calls: 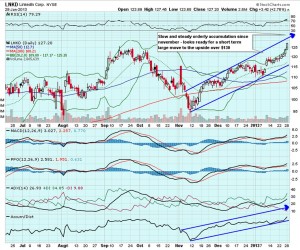 Stay tuned for more updates in the coming weeks on one of our favorite stocks, LinkedIn(LNKD)