This morning's job report, which I was pretty darn close to guessing (it was 173k and 5.1%) , didn't change the current state of the stock market.

Heading into the pre-market report stocks were already 1%+ lower, and soon after the report they slid even lower.

The opening bell brought a quick spike higher but as the minutes passed stocks resumed their meltdown with nary a bounce until very late in the session.  A sharp short squeeze at the end of the session briefly lifted stocks off their lows, but they still ended with a thud.  There was no lipstick that was going to make this sell-off look attractive, especially heading into a long holiday weekend.

Last nights flash crash ended up being a wonderful spot to get out of dodge.  It's hard to believe prices actually came back to even after the mini-flash crash before succumbing to 17 hours of non-stop selling.

It didn't look like anyone wanted to get long the market heading into a holiday weekend.  And why not.  I think the risk for next week is missing out on more downside, not missing out on a 3% spike higher.  Over night when trendline support was broken for the week, and stock futures flash crashed, the writing was not just on the wall, but the ceiling and the floors.  Stocks had more room to go lower.

But just as we've seen since March 2009, where stocks would gap higher and add to gains, offering little opportunity to open positions on the cheap, the same could be said about today's move.  If you weren't short heading into today, the 1.5% gap lower wasn't the most inviting proposition to go short. The market did bounce out of the gate, but it was a swift and short lived rally.   Names like $GPRO, $NFLX, $GOOGL, and even $AAPL traded like a boats making water.  The bilge pumps were over heating, trying to keep the SS Stock Market from crashing into the sea.  Instead we had an terribly deliberate sell-off.  Each bounce lasted just long enough to lure the next round of sellers.  Frankly a crash would have been more exciting, but orderly markets keeps the chaos at bay... for now.

In year past the market would get a comment from a FED official, or a rumor about the next Easing Program, which would lift stocks higher.  This time around... nothing.  No plunge protection team.  No presidential team on the markets.  No QE rumors.  Nothing.  And frankly, at this stage, those reasons to rally have over stayed their welcome.  The late day stick save was meek and unconvincing.

It's time for this stock market fly with it's own two wings.   Fly market fly.

To take off those training wheels.  To stop using the pacifier every time the market starts to cry. 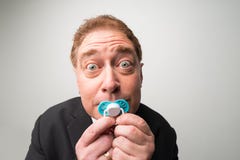 The last three weeks have brought to light the growing pains of 6+ years of unprecedented central bank support.  No QE?  No ZIRP?  WAaaaaaaaaaaaaaaa.

Let's face it though.  The market is going to learn how to survive without constant Central Bank assistance.  The markets will bottom.  The world will be a better place.  The bears will return to their caves.  The VIX will drop.  Today's prices will turn into another one of those "Wow $NFLX was under $100?"   "$AAPL was under $110?"  Who was the moron buying $VXX at $30?  It just reverse split again.

But.... we need to get through this mess of a market we are in now.  Just like anything in life, it feels a heck of a lot worse when you are in the midst of it.  6 months from now we'll be back to forgetting just how crappy the market traded this week and last week and the week before that.

But... we also need to keep the possibility that this selling turns into a self-breeding, self- fulfilling, self-motivating, honey pack your things we are headed to the bomb shelter, type of sell-off.  The one market crashes are made of.  Is the recent pull back the cracks forming in a wall that is about to crumble to the ground?

I've see countless correlations and comparisons the last few years on why stocks will crash now.... wait I mean why they will crash now..... {a few weeks later}  why stocks will crash now!   Of course at some point the crash call is correct.  We crashed in 1987 2001 2008 and its now 2015.  There is a cycle.  The market loves cycles.  As I alluded to last night, I don't think the Central Banks will allow a market crash.  Like China, they will do everything in their power to avert it.  But you would be remiss to ignore the possibility.  And of course if the market was setting up for a crash, you'd probably want to be sitting on as much profits as possible after the fact.

With that in mind I'd love to share this wonderfully simple yet revealing chart from nlightn:

Again, part of being a good trader is knowing all possible outcomes and determining the most logical one.  I will say that if this indeed is the next market crash, it will be the most precipitous fall in history.  And those positioned for downside will stand to make an incredible sum of worthless dollars and euros.  AHAHA.  My point being that another market crash back to SPY 666 or below and you might not be worried too much about money when civilization has collapsed.  But hey, there is no telling for sure what the world will look like after another market calamity.  If anything you'll have plenty of paper for your bonfire to keep you and your family warm.  And oh the stories.  The irony will be you'll be filthy rich in a filthy world where money is meaningless.  So you'll have that going for you... which is nice.

So on to where the market is headed next week and beyond.  I have wiped the bull slobber off my face the last few weeks.  Hey when $120 broke on $IWM I knew the winds were changing.  I just didn't know how fast and how far.... and quite frankly I still don't.  But we can look at the possibilities.

Last night I highlighted three possibilities.  After the overnight and jobs report action I think it's clear which of the three we are looking at going forward.

and its not this one:

Of course I wish I was 100% short heading into today's session.  I wish I was scaling into puts all day and shorting the world to shit.  But no.  I remained cautious.  And guess what?  If this is the outcome in the next week or two, there will be plenty of time to trade it for downside.  I'd much rather be a little late, but sober, to the party, than pre-game too hard and crash my car into a telephone pole on the way there.  Got it?  So it's game on.  I haven't been screaming from the hills every day since the lows in March 2009 to short this market.  I saw a market poised for new record highs.  But once momentum waned and key levels broke, the writing was on the walls.  Even this week I still wasn't 100% certain what lied ahead.  But three weeks of market action has given me all I needed to feel confident picking my spots next week.

I'd even argue what I was saying in 2013 is coming to fruition today.  We've had all these named sell-offs since the lows in March 2009.  Reasons for people to sell.  But this time around, I don't think you can define this pull back as a named sell-off.  China?  It's not all China.  Greece.  Interest rates.  The Rate Rampage.  Maybe it's a little of everything.  Growth.  Earnings.  The US Dollar strength.  Ukraine.  War.  Famine.  But it's not a named sell-off.  It's everything.

Heading into this long weekend investors had no reason to go long.  Frankly there isn't a compelling reason to be long stocks here.  Nearly 9 months of market consolidation in 2015 has finally given birth to a nasty correction.  Is there more correcting to come?  More flash crashes on the way?  Have we finally seen the top of this historic bull market?

After the crash last Monday I said there were good odds we'd revisit those prices.  The market decided to recover a lot of those losses, but now the selling has picked back up.  It's clear the FED is not going to rescue the market here.  We may see bounces and swift reversals along the way, but I think we are headed back to last weeks lows.  For the first time in many weeks I feel confident about the market.  And I'm ready to take this long holiday weekend to recharge and get prepared for some more amazing market action.  Bring it on!

See you in the chat room bright an early Tuesday Morning.  If you want to join me there sign up for a special labor day chat room membership trial.  email: optionmillionaires@gmail.com  Labor Day Trial for more details.