Monday marked the six year anniversary of the current bull run. One that has seen equities rally in the face of many possible negative catalysts, or what some would call climbing the 'Wall of Worry'.

Those who fell asleep on March 9th, 2009 and didn't wake up until today saw this : the S&P up 175%, the Nasdaq  up 245%, the Russell up 211%,  and the US Dollar up  11.67% . Wall of Worry? Hard to believe it when one looks at these gains. We have seen Government Shutdowns, Geopolitical tensions on most continents during the entire 6 years, unprecedented central bank intervention using unorthodox and unproven methods to fight slowing/negative growth, a Debt crisis in the Eurozone( more than once), US Debt Downgrade, and the list goes on and on. Yet markets have rallied in the face of all of these events.

The 'Wall of Worry' for equities, could be seen as a "Wave of Optimism' for Gold.  Gold  has traditionally been seen as a safe haven - a place investors flock to during market turmoil.  When equities fell, Gold was one of the benefactors, like the Sensei in 'The Karate Kid' - risk on, risk off - with the risk off trade being the one into Gold.

As this bull run has progressed, it seems the risk off trade into Gold has diminished. When markets fell, Gold has failed to find footing, and most recently, has actually fallen in tandem with equities.

The last event that should have put a fire under the Gold bugs and the shiny metal, was the move from the Swiss National Bank to unpeg it's currency from the Euro back in January. That event could give some credence to an argument against fiat currencies. Gold did find a bid for a few weeks before topping out at $1300. Since then, it's tumbled $140, closing at it's lowest levels since November.

All the reasons to own Gold, that propelled it to $1900 in 2011, have not come to fruition. Worse yet, in some cases the complete opposite scenario has played out - ie. hyperinflation.

I still think Gold is set to test $1000 in 2015 (if you missed it you can read my thoughts here from December : https://www.optionmillionaires.com/bear-case-gold/ )

For the Gold bugs reading this, understand, I do not short Gold or $GLD, but try to find trends that I can take advantage of via short term option positions. When the global economy crashes, Gold will be something you want to have. But for now, its just something Peter Schiff peddles (via Bitcoin as well), so he can continue seem relevant in this current market environment. 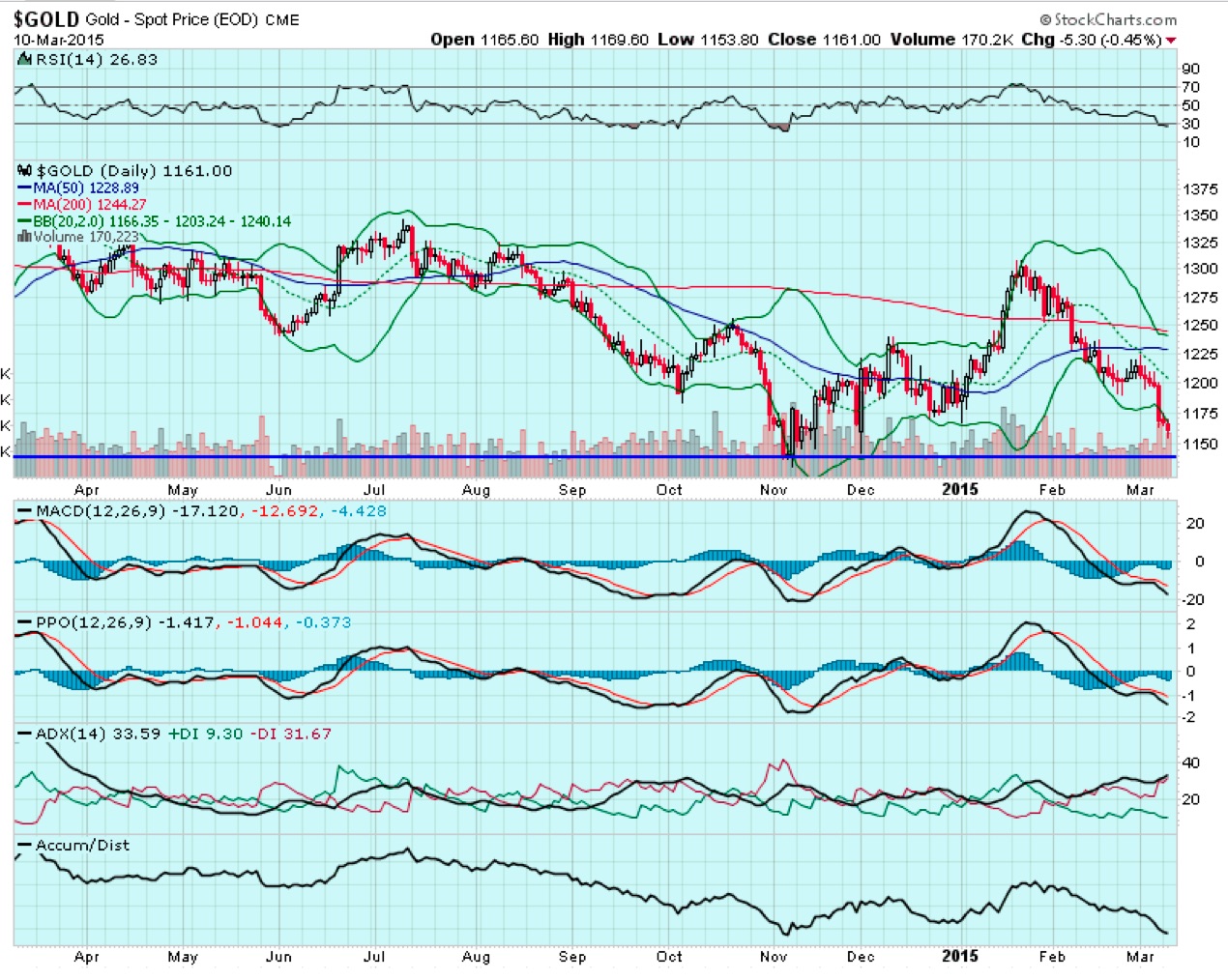