I have been a bear of Gold and Silver for sometime now. You can ready my thoughts and posts here, when the commodities were trading at levels much higher than they are now: https://www.optionmillionaires.com/silver-and-gold-follow-up-down-the-rabbit-hole-edition/

Heck, I called upon my lucky leprechaun to place the top on Gold in 2014: https://www.optionmillionaires.com/everyone-topic-tops/

Yet I continue to be 'assaulted'  by the Gold bugs. Those who use government conspiracies and central bank manipulation to back their bull case on the shiny metal. Am I an expert in Gold? Not at all. But I think I don't need to be one, to come up with my bear thesis on Gold.

Why am I a bear? Because I see a dislocation between the price of Gold, and what I think it is worth. And what is it it worth? I think Gold should already be trading back below $1k(my target for 2015), and headed towards $800. Why? Because folks still continue to live in the past in regards to Gold. They treat it like it’s relevance in the World Economy is exactly the same as it has always been throughout history, and fail to have the vision/foresight to see that times are changing. Just like: the grandfather who refuses to let go of the landline phone, still pays a subscription to AOL, transacts in cash only, ect.

The Bull case on Gold revolves around a few principles, one of which being Fiat Currencies. Gold Bugs continue to think currencies backed by governments will fail, and  the Gold standard will return to backstop the failure, as has happened time and time again throughout history.  If the world has learned anything since the gold standard was dropped, it was that having a countries currency pegged to a commodity restrained growth and made it extremely difficult for one to navigate through economic hard times. I would be shocked to see any country return to the Gold Standard in the next 2 years, let alone at all in the future, and think hoping on it to happen, is not a reason to own gold.

The rise of Bitcoin over the past few years has been astonishing. Just last year Bitcoin soared over 10,250%, as many became believers in something that would seem unimaginable 10-20 years ago - a virtual currency that is not tangible but resides in a digital wallet. There are similarities between Gold and Bitcoin: Both have a finite supply, are mined, and are a store of value. Ironically enough, last year around this time, the price of one bitcoin surpassed the price of an ounce of Gold. I don’t think Bitcoin will supplant Gold as a store of value -at least not yet - but do think the idea and acceptance of virtual currencies will start to weigh on Gold over time. 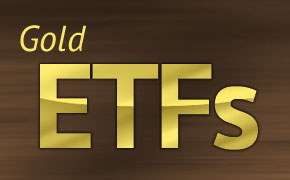 The GLD ETF just celebrated it’s 10th anniversary a few weeks back. Since the launch of GLD in 2004, the ETF witnessed a bull market in  GOLD, where the shiny metal rose from $440 to $1900. Here is a great read on the subject: http://online.wsj.com/articles/the-fund-that-reshaped-the-gold-market-1416268433 . At it’s peak in December of 2012, GLD held more Gold then all but four central banks. Why am I bringing it up? Well most of the Gold Bugs believe the ‘paper’ market has allowed unscrupulous traders and market players, to manipulate the price of Gold below it’s true value(some say $5,000!). Of course there is no mention of the impact of the GLD ETF on Gold markets since it’s inception. Think about all the small investors who were finally opened up to the opportunity to own a piece of Gold. Not only that, think of all the investment advisors pitching the shiny stuff during the 2008-2009 crisis. Then think of all those warning of inflation risks as the Federal Reserve embarked on un-orthodox measures to counter the great recession, which would surely lead to inflation(or Hyperinflation if your a Gold Bug). Everyone leading money into GLD and Gold followed. I am sure the Gold Bugs weren’t complaining about the ‘paper’ market and manipulation when Gold was heading up to $1900? ... its pretty easy to see in the chart below what was happening: 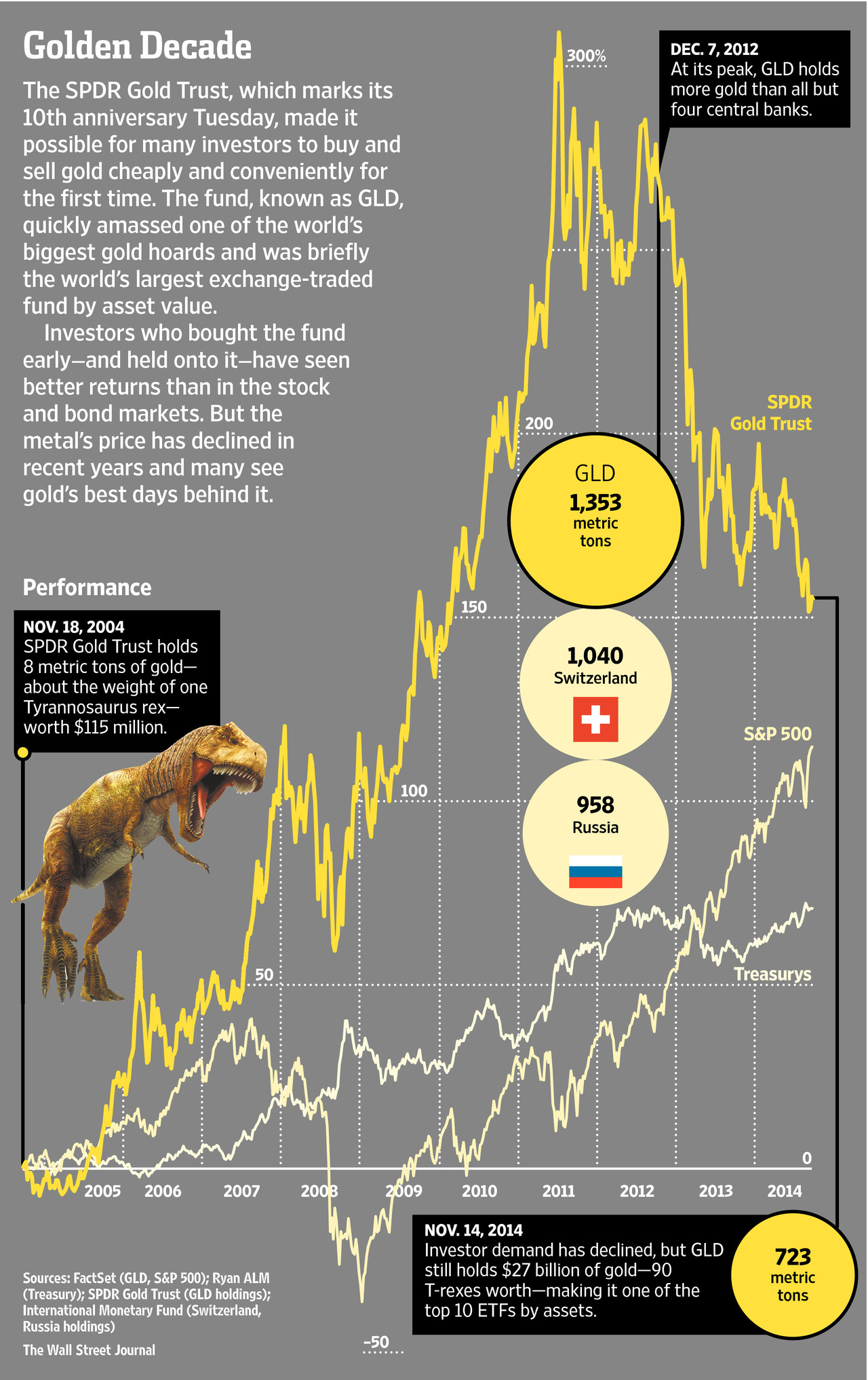 Now what happens when the inflationary event that was sure to happen doesn’t, the recession ends, the debt crisis in Europe is over, and the reasons to hold Gold are not the same as they were a few years ago. You still have investment advisors pushing the retail folks into Gold, but the funds start selling, and GLD is falling while markets are running higher. Eventually there is a continual run to the exits. I think GLD exacerbated the run up in Gold, but at the same time, has buffered it’s fall. I think 2015 will see more outflows, and the GLD ETF will be another catalyst for downside in Gold.

Another case for upside on Gold from the Gold Bug’s is demand, which is mostly from the West, particularly India and China, as well as from Central Banks. Recent numbers  from the World Gold Council shows a continued decline in Worldwide demand for Gold. From 2012-2013 demand dropped 11.1%, and it’s on track to drop another 5% this year: 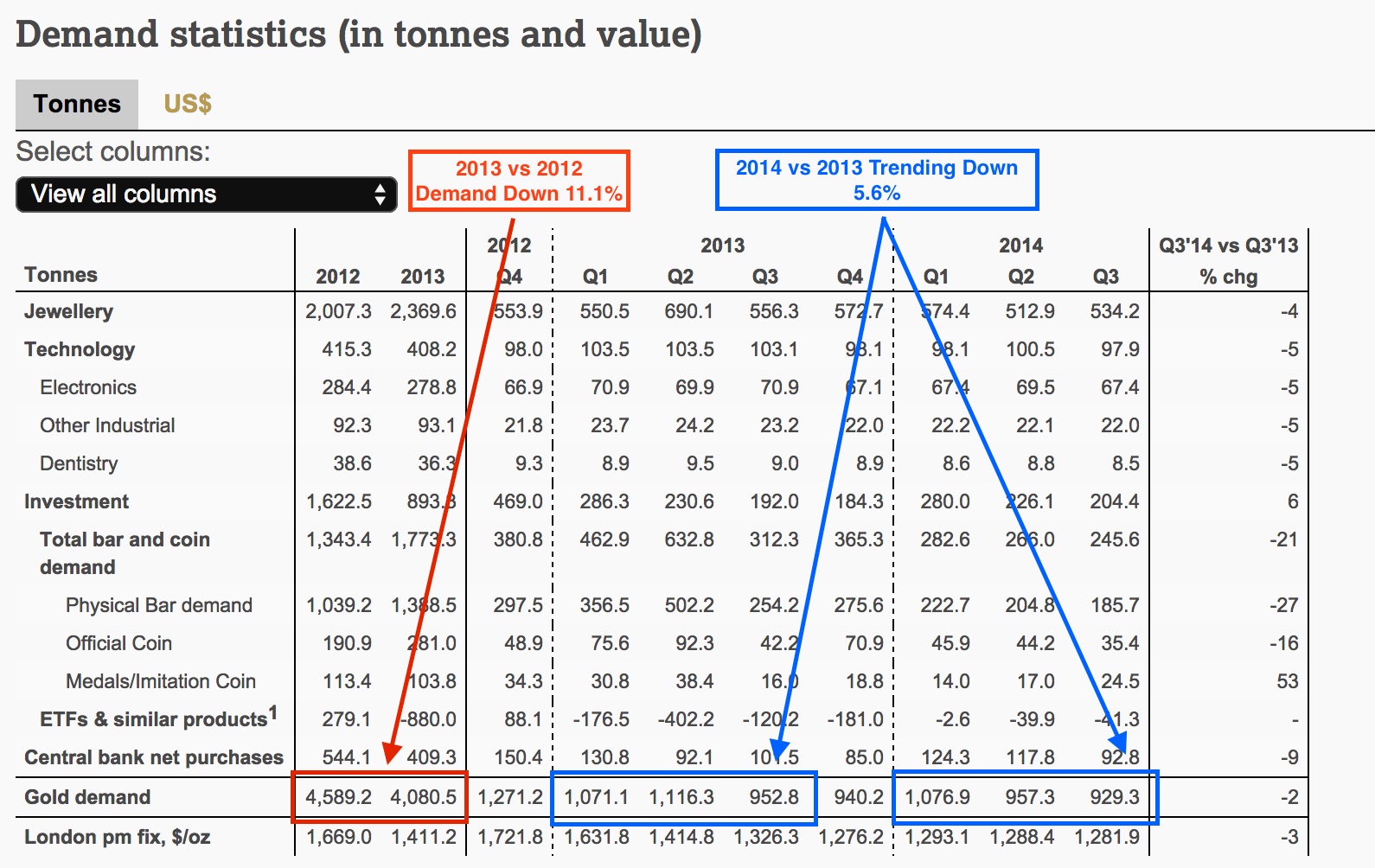 India did remove restrictions on Gold imports at the start of December, so that may help demand, but I think there is a shift happening in India. The election of Modi in the spring brought many changes and initiatives, one of which is a plan to get every indian household a bank account. Right now, nearly 2/5’s of the 1.2 billion population do not have bank accounts. Most still use gold as a currency or as a way to trade. As they get banks accounts, they will be less apt to hold the Gold, and may add to demand pressures.

There was also the recent ‘Save our Swiss Gold’ referendum that was voted down a few weeks back. It would have required the Swiss Central Bank to boost it’s Gold reserves to 20% from around 8%, and it would be barred from selling any of it in the future. A yes vote may have started a domino effect with other Central Banks, but I think the no vote is very symbolic in nature, and shows the true sentiment of Gold in this new World Economy.

There are many more reasons I could cite to back my bear case in Gold, including  rampant deflation around the globe and the stronger US Dollar. But the above are enough reasons for me to think Gold is going to $1000 in 2015. I also think the Gold mining stocks will continue to be under pressure next year, as Gold prices fall. We have seen cycles like this over the last 5 years, starting with Dryshippers, and including Iron and Coal. I think Gold is the next shoe to drop.

I will have another update at the start of the year!

3 thoughts on “My Bear Case on Gold”