I have been very bullish on AAPL for the last few months for many reasons. First, I believe that AAPL has phenomenal fundamentals and is poised to grow at a faster rate over the coming years. I believe that with the iPhone 6 and 6 Plus, AAPL's margins will increase along with the ASP. This should help EPS and Revenue grow at a much faster pace. Second, AAPL has an amazing growth opportunity in China, and I think that this should increase earnings substantially. Lastly, Apple Pay and the iWatch should keep investors excited for the time being. Regardless of whether you think these products/services will make a dent in AAPL's earnings, it is enough to keep investors optimistic that AAPL is continuing to innovate. Putting aside how great a company AAPL is, it is important to look at the technicals to see where the stock is heading next.

With the recent breakout in AAPL I took a look at where the stock is right now, technically. 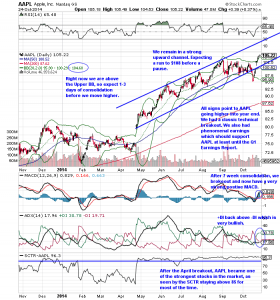 As you can see, there are many bullish signs on AAPL's chart. The two biggest positives are the positive MACD and the fact that it broke out above its prior high. It had been in a range for over 7 weeks, and the breakout could signal a sharp move higher. I see 3 possible scenarios for AAPL going into year end (A lot of it will depend on the SPY).

3rd: SPY Falls back down below the 200dma and re-tests the low of 1820. If this is the case I see AAPL ending they year between $100-$105. I find that this scenario is least likely. We are entering a seasonally strong period for the market, I expect any dip to be bought and for us to stay above the 200dma.