Stocks were down today?  That's Linpossible.  With LTRO, QE, ZIRP, Global currency devaluation, stocks are only suppose to go up... right?

Today stocks were up early and fell late.  In between we saw  an active session that felt more like a 2% down day than merely .4%.  Precious metals got clubbed  harder than a cheating cavewoman, with Silver down 7% at one point and Gold down more than its been since 2008.

AAPL saw another all time high today, as did many other stocks including Mastercard.  AAPL was able to hold up amid the late end of day chaos in spite of a sharp sell-off to $536, which left the stock still in positive territory.  Unlike stocks, which are allowed to close red once every 3-6 trading sessions, for AAPL anything short of a 1% gain these days is not permitted by the powers who are constructing this final house of cards.

The close was interesting as the market fell off a cliff  in what could be described as a mini-flash crash.  It was the end of the month, and perhaps those selling at the close will use the proceeds to buy more AAPL stock to open March trading.  If we learned anything today its that AAPL will defy all gravity, but I do think at some point soon, be it tomorrow, Friday, or next week, AAPL will succumb to a rather sharp sell-off of 3-5%.   For some it will feel like the world is ending, for others they will be happy to buy more AAPL at lower prices.  Judging by the chart below, everyone buying up AAPL now is buying at the perfect time.  Let's see.... would you rather have bought AAPL at $80 and sold at $544? or be buying up this stock now at its all time high faster than a runaway rickshaw. (which with today's high volume appears to be the case) 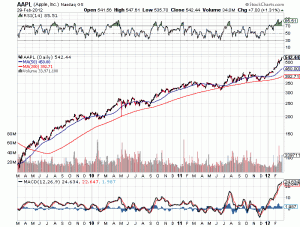 Right now stock futures have muscled their way back out of the red.  Risk currencies are surging higher along with precious metals.  The rally appears to be still intact.  Today could have been the mandatory down day and could see another 3-6 up days before we see a sell off like today.

If stocks can pull out a positive close tomorrow the market should be back to its Linning ways.