After putting up its best week of the year, where is the stock market headed next week and into the end of the year?  The murky market has yet to clear, but we are heading into one of the more gleeful times to be a bull.

And let us not forget, the gravitational pull for the stock market is up.  We get pull backs, crashes, but the over the long haul the market wants to go up.  Which is why most corporate 401k plans only have funds that trade for prices to go higher.

and we now enter the month of December.  While most Children around the world anxiously await the delivery of gifts under a tree  the stock market in December look forward to Santa's arrival as well.  It comes in the form of a stock market rally, cleverly dubbed the "Santa Claus Rally".

This year everything is coming together for some extra gifts for market bulls.  And to top it off years ending in 5 are up big historically... for those who believe in that stuff.

We couldn't go all of 2015 without the 'V' bottom of years past coming back for a reunion tour.   Using previous V bottoms as a guide, last weeks rally should continue over the short term. 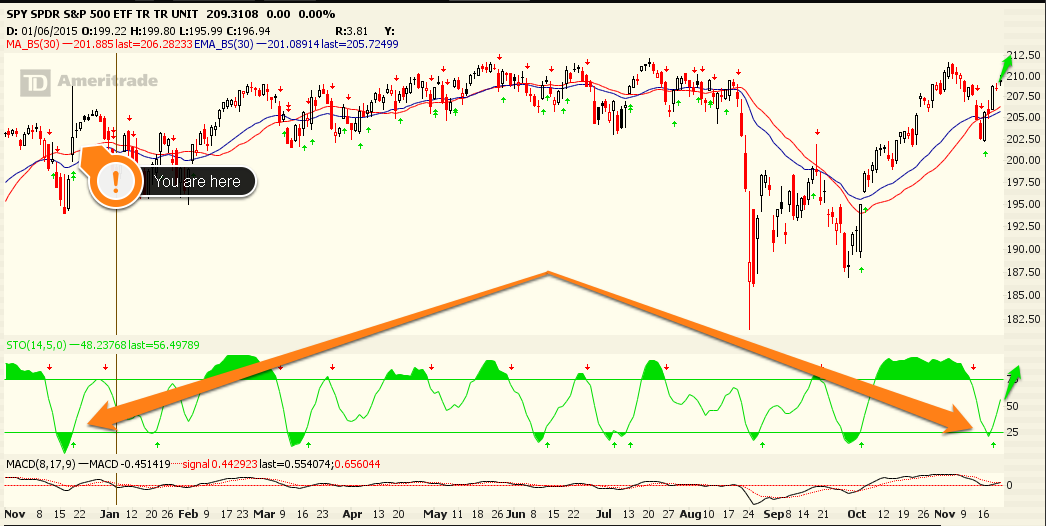 If you remember last year the market had a pull back in the middle of December.  There will be pull backs along the way, but I the momentum remains to the upside.

Of course we have the biggest FED decision since the dawn of man next month.  With every economist this side of the dark side of the moon calling for a rate hike anything less would be 'uncivilized'.  One could assume the market has priced in next months FED action or inaction, but we are sure to see some dramatic price action.

I remain in the camp that thinks the FED will not raise interest rates.  As it stands now the market is pricing in a 74% chance that the FED makes a move on the funds rate in December.

Can the economy prosper with higher interest rates and a stronger US Dollar?   Housing has made a tremendous turn around since the 2007 bubble, how much of the recovery is based on low interest rates?  What happens to the housing market when interest rates start to rise?  For one, housing become less affordable.  If housing prices start to fall again we will be in the same boat as 2007/2008, but this time without a paddle.

The US Dollar recently broke out of a consolidation phase which could send it levels it hasn't seen in over 13 years. 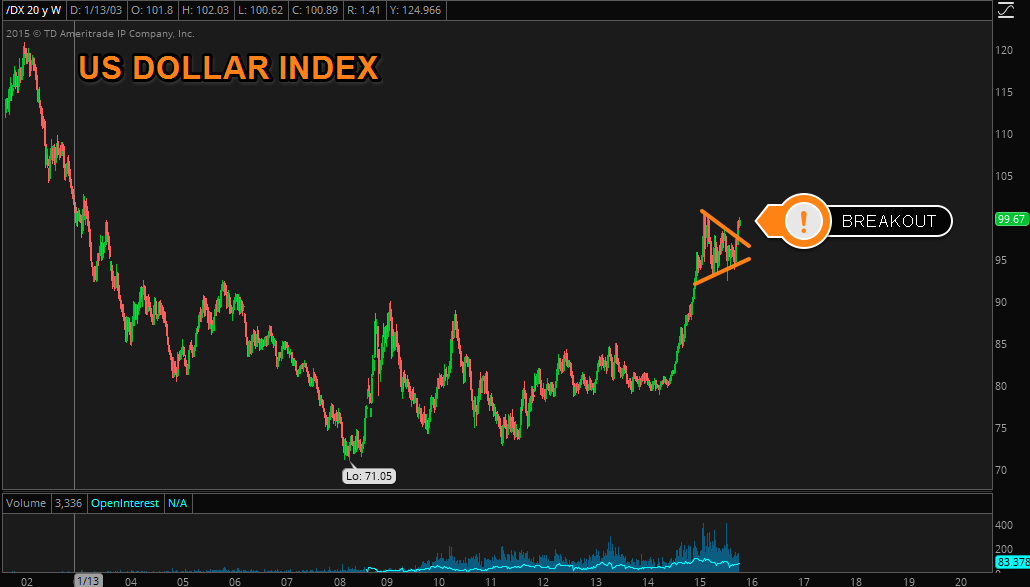 This was something I highlighted heading into 2015.

US dollar strength is going to be a headwind in 2016.

We are already starting to see it coming into play via corporate earnings.  A stronger US Dollar will have a wide ranging affect on everything from tourism to exports.   None of which will be a positive one.  That is something to watch for in the coming months.  But for now the market is setting up for a continuation of the move off the recent lows.

Great stats from Ryan Detrick about what potentially lies ahead into the end of the Month:

Momentum continues to the upside.  We come into the end of November with history pointing to higher prices.  What will December bring?

Will we head into December at new all time record highs?

This time last week market participants were wondering just how much further the market would fall.  Surely the Paris terrorist attacks were a negative for the stock market?  Yet again the market took a negative headwind and rallied in the face of it.

It's been tough shorting this market the last 6+ years.  The price action has been on the side of the bulls.  Heading into the end of November the market looks to be setting up for a move to fresh record highs.  We will end the month of November with a lot more questions than answers.  These are great questions that I am looking forward to attacking in earnest in the weeks ahead.

Short term I think the market will mover higher.  Longer term and into 2016 the outlook gets murky.  For now price action is offering some tremendous trade opportunities.  When you are trading options, stocks, and currencies being on the right side of those opportunities is all that matters.