This last week the market took a tremendous hit. The S&P 500 had its worst week in a few years, down 3.5% while the VIX shot up over 80%. This has left many Wall Street analysts questioning whether there will be a Santa Claus Rally. I may be the only one saying this, but I actually think that this pullback increases the likelihood of a Santa Claus Rally. So why do I feel this?

The main reason is this market is known for climbing the wall of worry. Right now we have plunging Oil prices, which has hurt global markets, and just recently the US Market. However, I think people may start seeing the positive side of falling oil prices, which is that retail sales should now beat expectations. Another reason is that sentiment has become very bearish, as seen by the VIX skyrocketing higher by over 80%. People are starting to panic, which is usually a sign of a market bottom.

Another reason I am bullish is seasonality trends. The last 10 trading days of December are usually very bullish. Many would say that seasonality should be discounted here because of the tremendous sell-off that we have seen over the last week. But, as a matter of fact, last week was seasonally a bearish week. We have matched the seasonality trends so far for the first two weeks of December and I think that we can do the same for the next two weeks.

In addition to concerns over Oil's crash, we have worries about when the Fed will raise interest rates. Any signal from the Fed Wednesday that they are considering raising rates ahead of schedule will cause a big market sell-off. I am watching to see whether they keep the phrase ‘considerable time’ in their statement. A removal of that phrase would indicate a March/June rate hike. However, I think that the Fed will keep this phrase in, which will result in a big market rally.

There is certainly the possibility that the market keeps falling into year-end. I could see a scenario where the Fed is hawkish Wednesday and Oil prices continue to fall which would lead to continued selling. However, I like the risk/reward for playing for upside into year-end. The S&P 500 is currently below the lower Bollinger Band which indicates that it is extremely oversold. The RSI is currently at 38, which means that we are almost at oversold territory. The NYMO (market breath indicator) is at -60, which also is oversold. Yet, with the VIX at 21 and the implied volatility on the SPY near the 52-week highs, how do you play for such a rally? I have the answer for you. 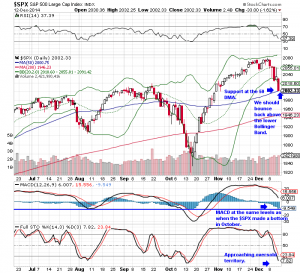 My trade is to buy the January $204 SPY call @$2.00 (closing price Friday) and sell the weekly $204 call @$.60(closing price Friday). This Call Calendar would cost you around $1.40. The reason this trade is smart is because if the market were to rebound the implied volatility would drop significantly. Therefore, you need a short call to cover some of the premium decay. Do not forget that the SPY has a dividend of around $1 Friday. This means that if the SPY were to open flat, and you were to put this trade on at the open, you would need the SPY to rally by $4.50 by the end of the week for the short call to lose money. I highly doubt the SPY rallies back over 2050 as there is too much resistance, not to mention it is an OPEX week. The perfect scenario would be a pin at 205, this way the long January call increases in value by 50% and the short call expires worthless.

Another reason I like the trade is because if the SPY continues to fall until expiration I can continue to sell the $204 call ($201,$202,$203 call if you have a large margin account) to lower the cost of the long call. If you are able to sell just $.35 a week for the next 4 weeks you will be able to pay off the entire cost of the long call. In the event that the market keeps falling, the IV will be very high and it will then be very easy to sell $.35 in premium every week.

For those that have a large trading account and are willing to take big risks there is another trade that could work out very nicely. Assuming the market opens flat at the open, buy the SPY Jan 204 call @$2.00, sell this weeks $196 put @$1.5 and sell this weeks $204 call @$0.50. As long as the SPY does not close under $194.50 this trade will be a big winner. In fact, if the SPY closes above $196 you will have exposure to the upside at a $0 cost! The big risk with this trade is that the market tumbles again this week. If that would occur you would face unlimited losses.

I will be doing a write-up later this month on my thoughts for 2015. Overall, I believe that the market will be much more volatile next year and we will see 1 big correction (10-20%). In turn, I am not planning on taking any Long positions into the New Year. The only reason I bought the January calls (an not December 31st calls) is that if the market were to sell-off into the New Year, I think we could have a strong bounce during the first few weeks of January. My plan is to sell the January call on December 26th (or 31st).