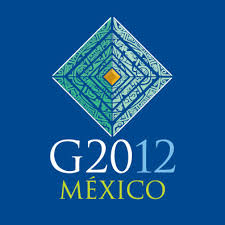 This weekend's G20 meeting in Mexico has ended and the the rhetoric is 100% positive. Apparently things are much better than the Cannes meeting. How is that possible? It is when you can throw more freshly fabricated money at the problem. Who needs growth, jobs, a budget, when you can magically create fake.... scratch that, real money out of thin air (Rumor has it Gandalf the Grey is a key adviser to the ECB). After this weekends meeting they need only $2 trillion to get the can kicked further down the road. $2 trillion seems rather paltry these days, especially when its backed by nothing but false promises. Where is that bazooka resolution, why not make it $10 trillion?   After all it's only monopoly money.   Who needs a gold standard when you can have currencies backed by lies instead. Isn't anyone scratching their heads at this point and saying "When and how do they plan on withdrawing this mind boggling stimulus? At what point do they realize what they've been doing the last 4 years has set us back 20?"

Following are excerpts from the final communiqué at the meeting of Group of 20 finance ministers and central bankers in Mexico City on Sunday.

The full text is available at www.g20.org/

ON THE EURO ZONE FIREWALL:

"G20 members have been actively engaged in taking the steps needed to safeguard the global financial system and to avoid adverse scenarios. At Cannes, our leaders asked us to review the adequacy of IMF resources. This review is particularly important against the backdrop of continued downside risks. Euro area countries will reassess the strength of their support facilities in March. This will provide an essential input in our ongoing considerations to mobilize resources to the IMF."

ON MORE FUNDS FOR THE IMF:

"We are reviewing options, as requested by leaders, to ensure resources for the IMF could be mobilized in a timely manner. We reaffirmed our commitment that the IMF should remain a quota-based institution and agreed that a feasible way to increase IMF resources in the short-run is through bilateral borrowing and note purchase agreements with a broad range of IMF members. These resources will be available for the whole membership of the IMF, and not earmarked for any particular region. Adequate risk mitigation features and conditionality would apply, as approved by the IMF Board. Progress on this strategy will be reviewed at the next ministerial meeting in April. Other options mentioned by leaders in Cannes such as SDRs are under review."

"Substantial policy actions have taken place since our last meeting, and recent economic developments point to the continuation of a modest global recovery and an easing in global financial market stress. We welcome the important progress made by Europe in recent months to strengthen their fiscal positions, adopt measures to reduce financial stress, build stronger institutions, implement growth enhancing structural reforms and to put Greece on a sustainable path."

"We also welcome the market improvement associated with the actions undertaken by the ECB. Nevertheless, growth expectations for 2012 are moderate and downside risks continue to be high. The international economic environment has continued to be characterized by an uneven performance, with weak growth in advanced economies and a stronger, albeit slowing, expansion in emerging markets."

"Structural problems, insufficient global rebalancing, a persistent development gap and high levels of public and private indebtedness and uncertainty continue weighing on medium-term global growth prospects. While volatility in international financial markets has declined, it generally remains high and we are committed to further reduce downside risks. We are alert to the risks of higher oil prices and welcome the commitment by producing countries to continue to ensure adequate supply. With unemployment still too high in many countries, we are firmly committed to supporting growth and job creation."

"We will continue working towards the reform of the quota and governance of the IMF, in line with the commitments made in Seoul and Cannes. To this end, the G-20 members reaffirmed their commitment to implement in full the 2010 Governance and Quota Reform by the agreed date of the 2012 IMF/World Bank Annual Meeting, and to a comprehensive review of the quota formula to better reflect economic weights by January 2013 and the completion of the next general review of quotas by January 2014. Also, the G-20 will contribute to the ongoing process to strengthen the surveillance framework of the IMF, providing its input into considering proposals for a new surveillance decision that includes more effective integration of bilateral and multilateral surveillance."