The week ahead is once again divided by a holiday, with many market participants enjoying a break. We have a big calendar.

This has not led to a quiet market, with big moves for no apparent reasons.

Many are eager to turn the calendar page, and will start the new year with a blank slate.

It is a good time for a little brainstorming, so I am sharing mine.

We have another short week, a government shutdown as partisan lines are redrawn, and also some important new data. Many will plan to take the week off, but some will be making last-minute position adjustments on Monday. I expect many market participants to happily turn the calendar page, enjoying a blank slate for the New Year.

In my last edition of WTWA I made some suggestions about planning for uncharted waters. That was more important than I could have known. Few have charts for the market moves we saw. Even the punditry struggled to find anything substantive beyond murmuring “oversold” and “short-covering.”

My thoughts? The moves continued to involve all sectors and stocks. It was definitely not a time for short-term stock pickers. This was true on the downside in recent weeks and also accurate for last week’s rallies. Thursday’s spectacular last-hour move was fascinating. Most observers just expressed amazement. Program trades from any source can generate big moves in a thin trading environment. We had some orders working above the market and were amazed when we got filled.

CNBC’s Bob Pisani offered an explanation the next morning: Portfolio rebalancing by a big fund. In this type of trade, the fund buys stocks and sells bonds. Here is his evidence, a synchronized move of stocks and bonds. 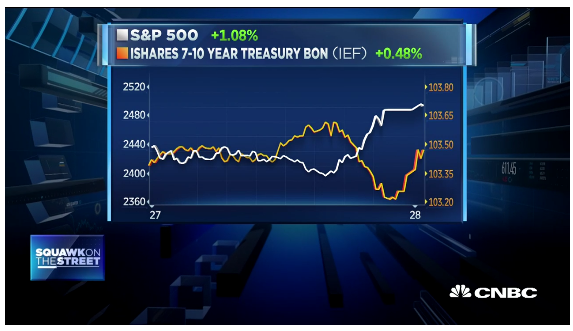 This was an 800-point Dow move in an hour or so. One fund, unless we think a number got together to trade at this time. I expect similar decisions from various pension funds and balanced funds. I did not think it would happen until investment committees met, probably in another week or so. These participants are not traders. Organizational decision making can be slow. We can expect to see more support from these sources in early January.

In an effort to provide some mid-week enlightenment, I wrote The Trepidation Trap.

Alan Steel provided another helpful view from across the pond. Read the entire post the fun and all of the key points. He included this chart followed by his own interpretation. 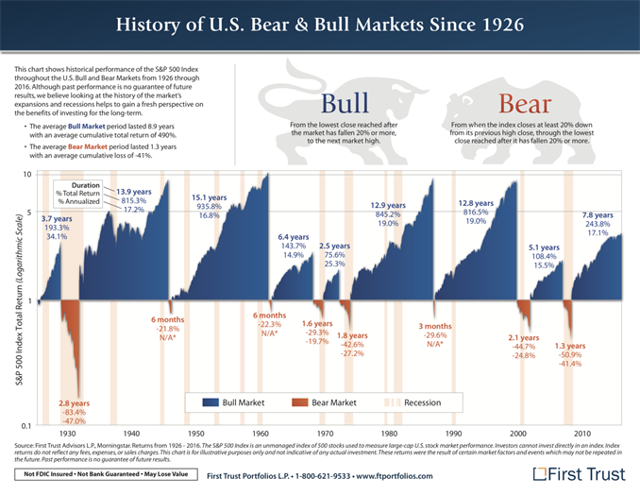 Admittedly, it’s easy to get caught up in it, particularly when the lunatics are running the asylum with:

Little wonder then that the consensus of opinion of investors about the stock markets are breaking negative sentiment records.

And that’s why wealth tends to avoid crowds.

The Story in One Chart

I always start my personal review of the week by looking at a great chart. This week I am featuring Jill Mislinski. She includes a lot of relevant information in a single picture – worth more than a thousand words. Read the full post for more great charts and background analysis. 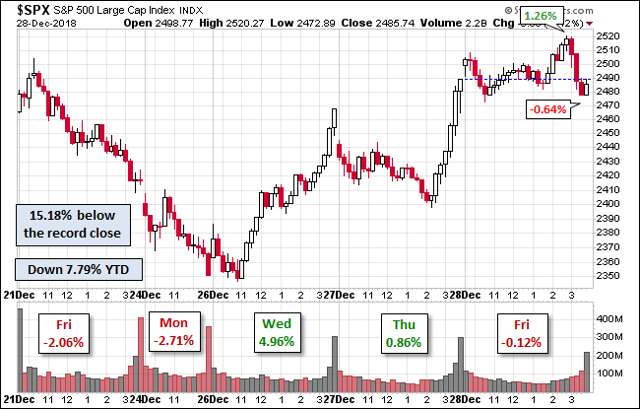 Jill’s title calls the 2.86% gain for the week a “slight bounce.” This is true in the context of the overall decline and recent volatility. The trading range for the week was 7.4%. Our indicator snapshot (below) tracks actual and implied volatility over various time frames.

The calendar is a big one, and we have a holiday-shortened week. I am especially interested in employment – both ADP and the official BLS version. ISM manufacturing is the most important of the various PMI-style indexes. Auto sales are also important, and FedSpeak will be back in vogue.

And of course, expect plenty of noise about the government shutdown and who should be held accountable. Economic news has not made much difference in recent months, but eventually this will change.

Briefing.com has a good U.S. economic calendar for the week. Here are the main U.S. releases.

Last week I said that I was planning a break from WTWA today, but I decided to follow a different idea. I am going to use the “blank slate” concept to highlight some things I am observing as well as some personal conclusions. Each of these might be developed into a full post outside the WTWA context, but the ideas are timely right now.

Here are some things on my mind. Comments and other ideas are most welcome. I hope you find them interesting. 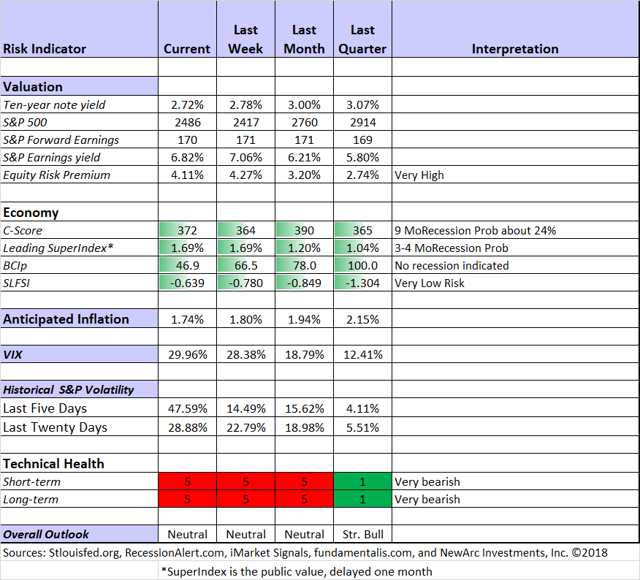 Short-term trading conditions remain at the highest risk level. This reflects Vince’s research on the combination of factors that make successful trading difficult. It does not necessarily mean that markets will move lower, but the danger is there. As I have noted in this section over recent months, we might get a full exit signal for trading models. Last week that happened for three of the trading systems.

Long-term trading also remains at the highest risk level. Those who emphasize technical analysis have emphasized the “damage” done to charts by the sustained correction. Our methods show that a clean bill of technical health will require some time.

Fundamental analysis remains strongly bullish. Earnings are great, prices are lower, and there is even less competition from bonds. We reduce fundamental positions (as we did in 2011) when we get a warning from the recession or financial stress indicators, not merely as a reaction to technical signals.

The C-Score method started showing higher recession probabilities in 2006. In early 2007 it showed that a recession was likely within the next nine months. The yield curve is part of the method, but it also includes indications for the likelihood of Fed action. It is an improvement over the yield curve by itself.

The St. Louis Financial Stress Index is not about recessions. It includes eighteen factors including various interest rates, credit spreads, the VIX, and similar factors. This research exhibits the higest statistical standards. Here is the historical chart and the suggestions for interpretation.

This leads me to a “neutral” overall outlook. It might be better stated as bullish for long-term investors and dangerous for short-term traders.

I hope readers find today’s change of pace a useful way to focus their own thinking. I am working on my “official” 2019 preview article, but some of these themes will find a home there. Others will get more attention in the year ahead.

I encourage you to think five or ten years ahead. What social and economic trends will continue? What companies will benefit?

Most of what we hear and read has a very short-term orientation. Investors need to get past this trap.