Two weeks ago, while the market was in the midst of its most recent pull back, I mused that the $272.50 $SPY level would be a likely reversal point.

The $SPY ended up hitting $273 before reversing higher.  I also said at the time, as I did in January, and during almost every other pull back this market has seen the last 8+ years, that we would be hitting fresh record highs in the short to medium term.    Yes I even threw that $SPY $300 number in there....

....And here we are.  Just a few percentage points away from new record highs.  Imagine that.  $300 well within reach.  Don't tell those uber bears that.  They are too focused on all the negatives..

The recession calls are loud and continue to grow.  There remains plenty of scary headlines and excuses to sell.  And you know what?  That's been a  good thing.

Take a chart of today's S&P500... lay a chart of every other time in history when the market dropped 40% underneath it adjusting it until it makes a decent match.... 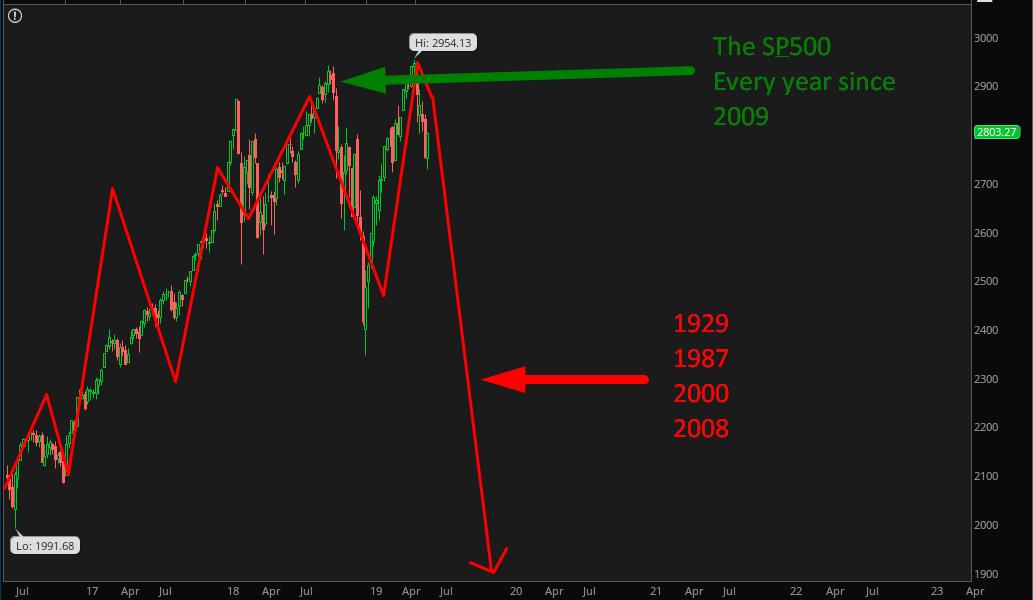 wa la!   Throw some money losing IPOs that rally far "beyond" expectations and you've just scared the shit out of everyone...again.   You don't have to look far to find a chart like this...

That about sounds right.  The proverbial throw shit at a wall until it sticks.  I can tell you that wall is still  clean and the floor is covered in shit.

The S&P500 has soared since the lows in March 2009.  And yet the amount of negativity surrounding the market is palpable.

Here we are just percentage points from NEW record highs, with the FED set to CUT Interest rates... and the bears are saying this CUT will mark the top!

Negativity has been the fuel for this market.  The wall of worry continues to get climbed.  Looking up this wall and still standing on the ground are those uber bears who have missed out on the rally of a lifetime and and now just spend their days trolling the FED on twitter.

To them the FED can do no right. Certainly the FED is hated, especially to those who were shorting the market the last 10 years.  They fought the FED and the FED won...  I guess I'd be pissed too.

Call me crazy.  But it is different this time around.  The Central Banks have opened the Pandoras box.  As long as they keep interest rates low.. this market will continue to rally... right in the face of those chronic crash callers and FED haters.

Which brings me to one of the top twitter follows out there.  A straight shooter.  No emotion.  Facts.  Sanity.  And reality.

If there is one twitter handle to keep you focused with those binders on it is --->> https://twitter.com/ukarlewitz

and I love the pinned tweet, with an arrow pointing at two of my favorites -->>

The FED will always be hated and it can always be different this time.

Have a great weekend and a Happy Fathers day to all!