Most Active From Yesterdays Session: 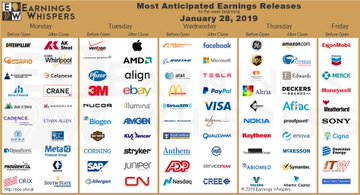 Nasdaq futures led U.S. indexes overnight, rising as much as 1%, after Apple's (NASDAQ:AAPL) quarterly results sent relief waves through the markets. Investors are now looking to the outcome of the Fed's rate review later in the session, amid heightened expectations policymakers will reinforce their dovish stance and hold off on hikes for at least the next few meetings. The spotlight is also on Chair Jerome Powell and whether he has any inclination to slow the drawdown of the Fed's balance sheet by up to $50B/month.

Rip it up and start again? The FTSE is trading 1.4% higher after another turbulent Brexit night that saw MPs broadly support sending Theresa May back to Brussels to renegotiate the controversial Irish border arrangement and voted against extending the deadline for Britain's exit from the EU. The pound initially fell to $1.30 against the dollar, as European Council President Donald Tusk rejected the prospect of renegotiation, but sentiment has shifted in favor of sterling which has been trading this morning at $1.31.

Eurozone economic sentiment weakened for a seventh month in a row in January, with the European Commission's gauge falling to 106.2 from 107.4, marking the lowest level since November 2016. "Managers' assessment of the past production worsened significantly. Also production expectations deteriorated strongly, as did the appraisals of the stocks of finished products and of both overall and export order books."

The U.S. and China will begin 48 hours of trade talks today in what will be the highest-level discussions since President Trump and Xi Jinping agreed to a 90-day truce for their trade war in December. Treasury Secretary Steven Mnuchin expects to make "significant progress" toward a comprehensive trade agreement, although many remain skeptical about whether the economic giants can bridge their differences.

Earnings, earnings, earnings... Apple kicked off big tech earnings on Tuesday, but more are on the docket. Facebook (NASDAQ:FB) and Microsoft (NASDAQ:MSFT) are scheduled to report results today, and Amazon (NASDAQ:AMZN) will disclose its quarterly figures on Thursday. Tech stocks helped propel the stock market to record highs last year, but have recently slumped because of slower global demand, rising trade tensions and concerns about stricter regulation.

Apple rose nearly 6% AH after beating Q4 expectations as CEO Tim Cook said trade tensions between the U.S. and China were easing. Services revenue - a category that includes Apple Pay, Apple Music and iCloud storage - grew 19% Y/Y to $10.9B, but iPhone revenue came in just slightly below projections (although that was largely priced in). Apple's (AAPL) cash on hand now stands at $245B, up 3% from the previous quarter.

More investment in Israel? Intel (NASDAQ:INTC) has bid $5.5B-$6B in cash and stock (a roughly 30% premium to Tuesday's closing price) to buy Mellanox Technologies (NASDAQ:MLNX), according to Calcalist. In October, reports suggested that Mellanox - which makes chips for cloud computing data center servers - hired a financial adviser to explore a sale after receiving takeover interest from at least two companies. MLNX +23% premarket.

Facebook has been secretly paying people to install a "Facebook Research" VPN that lets the company suck in all of a user's phone and web browsing activity, TechCrunch reports. "We don't share this information with others and people can stop participating at any time," a Facebook (FB) spokesperson declared, though the company pulled the offering overnight from Apple's App Store. It could've potentially been a violation of the tech giant's policy - similar to its recently banned "Onavo Protect."

Foxconn is reconsidering plans to make advanced LCD panels at a $10B Wisconsin campus, special assistant to CEO Terry Gou told Reuters. It also intends to hire mostly engineers and researchers for the venture, rather than the manufacturing workforce originally promised. Foxconn (OTC:FXCOF) has further slowed its pace of hiring, putting at risk the controversial incentives that were intended to revive American manufacturing.

Next hit to Huawei... The Czech tax authority has excluded the Chinese telecom equipment supplier from a tender to build a tax portal after the country’s cyber watchdog warned of security threats, the Mlada Fronta Dnesreports. It would be Huawei's first Czech disqualification as it faces growing scrutiny over its ties with the Chinese government and allegations that Beijing could use its technology for spying.

With more than 84 dead from its latest dam disaster, Vale (NYSE:VALE) will spend 5 billion reais ($1.3B) to take as much as 10% of its iron ore production offline and decommission 19 dams like the one that burst last week. At the peak of that process, the impact on Vale's production will be 40M tons of iron ore and 11M tonnes of iron pellets per year. VALE +4.6% premarket.

Mexico's Supreme Court had rejected a bid by the makers of Corona beer for a value-added tax rebate worth billions of pesos, according to President Andres Manuel Lopez Obrador. Corona is made in Mexico by brewer Modelo, a unit of Anheuser-Busch Inbev (NYSE:BUD). In the U.S., production of the beer is licensed to Constellation Brands (NYSE:STZ).

Setting up a takeover battle with Euronext (OTCPK:EUXTF), Nasdaq (NASDAQ:NDAQ) has launched a rival offer of 152 crowns per share for Oslo Bors. Euronext's bid values the Norwegian stock market operator at 145 crowns per share. The news comes as exchanges are challenged to justify their fees, with IEX confronting rivals Nasdaq, NYSE (NYSE:ICE) and Cboe (NASDAQ:CBOE) to defend the "dramatic" costs they charge brokers for market data.

Include or exclude trucks? Volkswagen (OTCPK:VWAGY) held on to its position as the world’s top-selling automaker for the fifth year in a row in 2018, with deliveries rising 0.9% to a record 10.83M. However, just counting cars and light commercial vehicles, the group only sold 10.6M units, less than the 10.76M vehicles sold by the Renault-Nissan-Mitsubishi alliance (OTCPK:RNLSY, OTCPK:NSANY, OTC:MMTOY). Toyota (NYSE:TM) retained its third spot, selling 10.59M vehicles last year.

On the sidelines of an alliance meeting tomorrow, Nissan (OTCPK:NSANY) CEO Hiroto Saikawa is aiming to hold his first face-to-face discussion with new Renault (OTCPK:RNLSY) Chairman Jean-Dominique Senard, NHK reports. Senard replaced Carlos Ghosn, who remains incarcerated in Japan for alleged financial misconduct. Ghosn has been removed from all his roles at the automakers, threatening the future of their transformative two-decade-old partnership.

Sales at Ford's main joint venture in China fell 54% to 378K units last year, the lowest level since 2012, amid a slowdown in the world's largest car market. Including sales of its self-developed brands, Chongqing Changan Automobile warned that 2018 profits had fallen by up to 93%. Analysts say it has taken longer for Ford (NYSE:F) to bring new models to the market than its overseas rivals. F -1.5% premarket.

Unusual arrangement? Southwest Airlines (NYSE:LUV) benefited from an unusual deal with FAA regulators during the recent partial government shutdown: The carrier agreed to cover the cost of briefly recalling a furloughed safety inspector to sign off on putting three new jets into service. Some depicted the episode as the workings of savvy lawyers and agency connections, though others said the agreement appeared to represent favorable treatment for wealthy corporations to obtain scarce services.

More than 1,000 flights are grounded nationwide as a record breaking blast of Arctic cold bears down on the U.S. Midwest. Carriers are taking precautions such as moving airplanes and equipment to heated indoor spaces, with temperatures too low for workers to load bags or get planes ready for takeoff. Airlines have also waived date-change fees for travelers affected by the extreme weather. Related: DAL, AAL, UAL, LUV