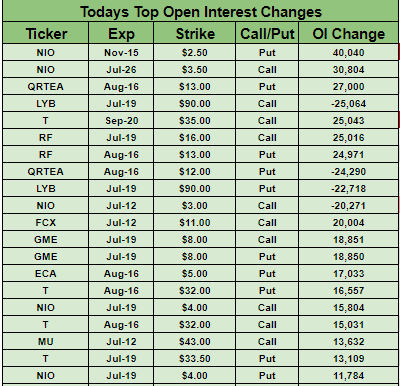 There weren't any fireworks from the Fed Chair yesterday, but Jerome Powell may set off some explosives this morning as he begins his testimony before the House Financial Services Committee. Starting at 10 a.m. ET, Powell is expected to talk about slowing economic activity and increased risks - showing that the Fed is ready to cut interest rates as needed - but he's likely to keep markets guessing about how soon and how deep the Fed intends to trim rates. The prevailing view, priced into the futures market, is for a 100% chance of a quarter point rate cut July 31.

U.S. equity futures are suggesting a modestly lower open on Wall Street, with DJIA futures down 44 points, ahead of Powell's big day on Capitol Hill and his likely defense of central bank independence in response to President Trump’s criticism of Fed policy. Adding to the excitement is the release of minutes from the FOMC's last rate decision, offering new detail on how officials judged growing risks from trade uncertainty before last month's G20 summit in Japan.

Airbus (OTCPK:EADSY) has confirmed its H1 aircraft deliveries climbed 28% to 389 from 309 in the prior-year period, putting it ahead of Boeing (NYSE:BA) for the first time in eight years. For the third straight month, the U.S. plane manufacturer reported no new orders of MAX aircraft, and its first-half deliveries overall fell to 239 planes (from 378 in the same period in 2018). Airbus, whose deliveries typically are weighted to H2, has promised to build 880-890 aircraft this year; Boeing, which had planned to build as many as 905 airliners this year, has suspended delivery guidance because of the 737 MAX crisis.

After achieving record deliveries in the second quarter, Tesla (NASDAQ:TSLA) is getting ready to increase EV production at its factory in Fremont, California. "While we can't be too specific in this email, I know you will be delighted with the upcoming developments," wrote automotive president Jerome Guillen. Tesla has said it plans to produce "significantly" more than the 360,000 to 400,000 vehicles expected to be delivered in 2019, easing concerns over demand for the company's electric cars.

The latest night of Brexit drama in the House of Commons saw MPs pass a measure by a single vote aimed at stopping the U.K.'s future leader from taking the country out of the EU without Parliament. In a punchy response, Boris Johnson insisted he will not rule out the radical step of suspending Parliament in order to deliver Brexit on time. The task was also made harder Tuesday when the opposition Labour Party officially announced its support for a second referendum on any Tory Brexit deal.

Most base metals prices rose overnight, led by nickel, which rose as much as 2.1% to $12,970 a ton in London, while Shanghai nickel jumped to 103,160 yuan ($14,985.69) per ton, notching a three-month high. It follows news that American and Chinese trade officials held "constructive" phone talks on Tuesday, while the U.S. government said it will also issue licenses to companies seeking to sell goods to China's Huawei where there is no threat to national security.

Something interesting is happening in the media landscape, where Netflix (NASDAQ:NFLX) is becoming the incumbent, and the challengers are established firms that have been around for nearly a century. Disney (NYSE:DIS), WarnerMedia (NYSE:T) and NBCUniversal (NASDAQ:CMCSA) are all launching direct-to-consumer streaming services by the first quarter of 2020, and the race heats up over content. The latest move has seen WarnerMedia pull Friends off Netflix in 2020 when it debuts its service, HBO MAX, and comes shortly after it lost The Office to NBCUniversal coming 2021.

Lot of help from my friends?

Facebook (NASDAQ:FB) will need a lot of help to launch its Libra cyptocurrency and is "taking the time to do this right," David Marcus, head of the Calibra digital wallet, said ahead of his testimony to Congress next week. "We understand that big ideas take time, that policymakers and others are raising important questions, and that we can't do this alone," he wrote in a letter to the Senate Banking Committee. "We want, and need, governments, central banks, regulators, non-profits, and other stakeholders at the table and value all of the feedback we have received."

Updating its policy on hateful conduct, Twitter (NYSE:TWTR) now says language that "dehumanizes on the basis of religion" will be removed when reported by users or identified by the company itself. The company is also evaluating how it could apply the policy regarding offensive language to better protect other groups, including people of color and members of the LGBT community. On Monday, Instagram (FB) said it was rolling out new features to combat unacceptable behavior, including a tool that relies on AI to determine whether language in a post could be deemed offensive and that can prompt the poster to reconsider.