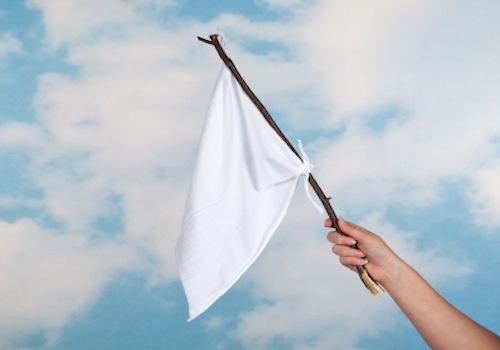 After 5+ years of an amazing bull market, with stocks soaring to record highs, this weeks action, from a technical perspective, could be marking the top.  As 2014 progressed we've seen many bears, after miraculously navigating the biggest bull market of our lifetime, throwing in the towel.  That in itself should raise the eye brows of market participants.

This week the charts did the talking, breaking below key support lines and marking a possible change of direction for the market.  I may have been fighting the move lower from record highs the last few weeks and it sucked, I can only imagine what it felt like to fight this market every day from the lows in March of 2009.

I'm not going to be that pig headed, egotistical, or defiant in how I view the market.  I'm not a perma-bear or a perma-bull.  It's easier to trade what we see, than fight what we know.  We all know this market was defying logic.  But the charts were telling us to stay long.  Now they are telling us to either step aside and wait for the dust to settle, or go short.

The $SPY has broken the Abenomics trendline that I have been talking about the last 2 years.  This weeks big red candle is all that matters.  Barring a massive reversal higher we can say goodbye to Abe.

What a difference a day can make.  I was just talking about how the averages got back over support.  Now they have clearly fallen below with the price action showing continued weakness is likely here.

$IWM is out of the long term channel.  We could be looking at a move under $100 in the short term.

I would much rather see the market continue to move higher.  We've been pretty spot on about that move over the years.  We may not like what the Central Banks are doing around the globe, but fighting their actions has proven to be futile.

I say congratulations to those perma-bears out there, who shorted the market every day and are still standing to short today.  It has been a long time coming.  You root for something long enough, eventually it happens.  Just look at the NFL's Buffalo Bills.  They don't win often, but they got a great group of faithful fans.  For the 2nd time since 1999, they have a winning record!

Do I think stocks are going to crash?  Break down and never look back?  Are we at the start of the next 60% decline?  I'll cover that in more detail at a later time.

I do think we could be looking at another 5-10% of downside before the dust settles, if the $192.30 level of $SPY doesn't hold today.  I also think that the global weakness we are seeing and the strengthening US Dollar could get the FED to rethink pulling away the punch bowl from the markets.  This would ignite another rally for risk assets.

I'm not 100% certain of the market continuing its pull back.  Today could mark lows that we don't see for many years.  Throughout the rally from the March 2009 lows, we've seen sell offs far worse than the one we are going through now.  In my gut I feel like this market is going to head to new record highs again before the year is through.  But I am also not going to fight the weakness we are seeing in the markets.

I'll fight a pull back for a week or two, but I'm not going to let my ego get in the way of reality.  The reality is, quite simply, key support levels have been broken, and I will be biased towards more downside until I see something different.  Of course that's not going to help any of the long positions I opened recently.  I am not the perfect trader.  I am wrong on trades, but I am sure as heck not going to fight something for5+ years just because I'm a pig headed ego maniac.  I'm here to make money, and absent a reversal off current selling lows, I think the money will be made to the downside.

Mrs. Market is best at inflicting pain to the most participants.  The bears have been throwing in the towel this year, and here charts are telling us to switch to trading for downside.   You never know what this market will do, we could snap back over all support lines and head to Dow 20,000.  Wouldn't that be just perfect?