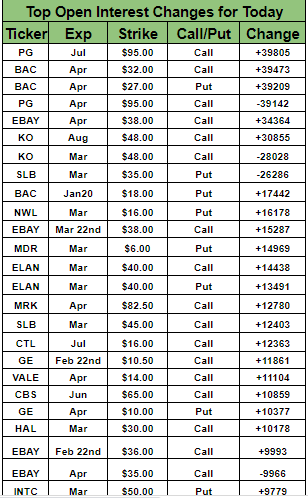 The world's largest retailer reveals Q4 results this morning, providing the latest snapshot on the health of the American economy. Some on Wall Street are expecting Walmart to disclose its weakest profit margins in years - alongside rising sales - as investments it's making to better compete in the digital era weigh on profitability. Rising transport and labor costs are also adding to bottom line pressure, with Walmart currently offering a yearly salary of almost $90,000 to attract truckers for its delivery fleet.

U.S. stock index futures fluctuated overnight as traders waited for new details to emerge from the latest round of U.S.-China trade talks. A new session of discussions will take place today, with higher level talks due later in the week. While officials have been building up hope for a deal, the Chinese government said yesterday that Washington was inhibiting its industrial development by claiming Huawei equipment could pose a cybersecurity threat.

Where does trans-Atlantic trade stand? European Commission chief Jean-Claude Juncker speaks today in Stuttgart - the hometown of Daimler (OTCPK:DDAIF) - after the U.S. Commerce Department sent a report to President Trump that could unleash steep tariffs on imported vehicles. "Trump has given me his word that there will be no car tariffs for the time being," Juncker declared. "I believe him. However, should he renege on that commitment, we will no longer feel bound by our commitments to buy more U.S. soya and liquid gas."

Pressure towards a different Brexit solution is boosting the pound as the resignation of seven Labour MPs from the U.K.'s main opposition party weigh on the influence of Jeremy Corbyn and his Brexit strategy. The faction will sit in the U.K. Parliament as a new group of MPs, known as "The Independent Group," after citing concerns with the main opposition's "Brexit" position, "bullying" and "anti-semitism."

Australian Trade Minister Simon Birmingham has poured cold water on proposals from the U.K. to swiftly join the Comprehensive and Progressive Agreement for Trans-Pacific Partnership (CPTPP) post-Brexit, but did admit the country stands ready to "fast track" some form of trade deal with Britain. U.K. International Trade Secretary Liam Fox has repeatedly set out the goal of joining the CPTPP, an agreement that includes Australia, Japan, Canada, and several other nations.

Germany's current account surplus shrank in 2018, but still remained by far the world’s largest due to strong exports. The measure, which tracks the flow of goods, services and investments, came in at $294B, followed by Japan with $173B, and Russia with a surplus of $116B. The data from the Ifo institute is likely to renew criticism of Chancellor Angela Merkel's fiscal policies.

Saudi Crown Prince Mohammed bin Salman plans to invest a whopping $20B in Pakistan - including in its energy and agriculture sectors - as he begins a swing through Asia at a time when his ties with the West are waning. The news didn't appear to faze investors, with the benchmark Karachi Stock Exchange 100 Index falling yesterday to the lowest level in about three weeks. MBS's stop in Pakistan is the first leg of a broader trip that will take him to India, South Korea and China, where he's set to meet with President Xi.

More retail trends... Payless ShoeSource began closing its 2,700 U.S. stores on Sunday and filed for its second bankruptcy in two years. The latest retail victim may point to storm clouds hovering over the industry, or possible positive developments for Caleres (NYSE:CAL) and DSW (NYSE:DSW) due to a narrowed shoe store field. Toys "R" Us, Shopko, FullBeauty Brands, Charlotte Russe, Things Remembered and Gymboree (OTC:GMBEQ) have all filed for bankruptcy in the past year.

Spending the past two years mapping its carbon footprint, Amazon (NASDAQ:AMZN) has announced plans to make half of all its shipments carbon neutral by 2030. To reach that goal, the company said it will use more renewable energy like solar power, have more packages delivered in electric vans and push suppliers to remake their packaging. Amazon is calling its program "Shipment Zero," and plans to publicly publish its carbon footprint for the first time later this year.

U.K. manufacturing is under further pressure after Honda (NYSE:HMC) announced it would close its only British car plant in 2022, facing challenges of declining diesel vehicle demand and Brexit uncertainty. Honda built over 160K vehicles in Swindon, accounting for a little more than 10% of its total British output of 1.52M cars. Nissan (OTCPK:NSANY) recently canceled plans to build its X-Trail SUV in the U.K., and in January, Britain's biggest automaker - Jaguar Land Rover (NYSE:TTM) - said it would cut 10% of its workforce.

Months before the arrest of Carlos Ghosn, the Japanese government intervened in talks about whether to merge Nissan (OTCPK:NSANY) and Renault (OTCPK:RNLSY), WSJ reports. Nissan executives initially asked for help in fending off a proposal to merge the carmakers that Ghosn was championing, but the move threatened to backfire. Japan's Ministry of Economy, Trade and Industry, or METI, responded by drafting an agreement that would allow it to oversee talks between the two auto partners, a role Nissan considered invasive.

EU negotiators have agreed to impose caps on carbon dioxide from trucks for the first time, stepping up the fight against climate change. A 30% CO2-reduction target for 2030 - compared with 2019 levels - is set to be levied on manufacturers, as well as an interim emissions cut of 15% for 2025. In December, EU negotiators reached an accord to tighten caps on CO2 from cars. Related: OTCPK:DDAIF, OTCPK:VWAGY, OTCPK:RNLSY, OTCPK:VOLVY

Trouble at Southwest Airlines? The carrier is under FAA investigation for widespread failure to accurately track the total weight of checked bags loaded onto its flights, WSJ reports. Southwest (NYSE:LUV) has also told its mechanics it was experiencing an "operational emergency." The airline usually plans for having as many as 20 aircraft removed from daily service, but each day last week, the percentage of out-of-service aircraft had been double the daily average.

Earnings overnight... HSBC (NYSE:HSBC) -4.4% premarket as full-year profit missed analysts' expectations, despite higher deposit revenue from Asia. BHP (NYSE:BHP) -1.5% holding its dividend steady as underlying profit fell short of estimates. Danone (OTCQX:DANOY) fell 13.4% as profit and sales slipped during 2018, dragged down by the impact of a consumer boycott in Morocco.

The world's two largest providers of index funds, BlackRock (NYSE:BLK) and Vanguard, together grabbed 57% of global net new inflows into long-term mutual funds in 2018, according to Morningstar. The inflows, however, dropped by almost 70% last year to $606B - from the $2T record set in 2017 - driven by large falls in many stock markets and concerns over the outlook for credit markets.

After a year of trying to find a buyer for the division, Pearson (NYSE:PSO) has agreed to sell its U.S. schools course materials business for $250M to private equity group Nexus Capital Management. "The sale frees us up to focus on the digital first strategy that will drive our future growth," CEO John Fallon declared. The U.S. K12 courseware unit accounted for around £20M of Pearson's operating profit in 2018, when it generated £364M of revenues.

Teva Pharmaceutical expects its generic version of Mylan's (NASDAQ:MYL) EpiPen to have about 25% share of the U.S. market by the end of 2019. The company is already selling its product for adults and plans to start supply of a junior version for young children in 3-4 months, CEO Kare Schultz declared. Mylan also has a generic version of its EpiPen, which is priced at around $300, similar to Teva's (NYSE:TEVA) product. TEVA +1.1% premarket.

A Mongolian regulator is temporarily suspending operations at local KFC restaurants to conduct inquiries, as 42 people were hospitalized and hundreds showed food poisoning symptoms after eating at an outlet in Ulaanbaatar. Contaminated water supply appears to be the source of the issue, according to the city's Metropolitan Professional Inspection Agency. KFC, which is part of Yum Brands (NYSE:YUM), has at least 11 restaurants in the country, according to its website.

Drama at Papa John's... Founder John Schnatter is welcoming the "up to $250M" investment from Starboard Value, which saw the hedge fund's CEO take over as restaurant chairman, and increase the number of directors, diluting Schnatter's influence. Schnatter still filed an updated lawsuit, aiming to undo a new provision of a voting agreement that requires Starboard to vote its company shares in favor of Papa John's (NASDAQ:PZZA) preferred directors.

Facebook said it is "open to meaningful regulation" after U.K. lawmakers lashed out at the tech giant, saying it should be subject to a compulsory code of ethics to tackle the spread of fake news and abuse of user data. Calling the company "digital gangsters," the Digital, Culture, Media and Sport Committee further concluded that Facebook (NASDAQ:FB) founder Mark Zuckerberg failed to show "leadership or personal responsibility." "Democracy is at risk... and big tech companies are failing in the duty of care they owe to their users."

FB also wants to develop its own artificial intelligence chips that go beyond what's currently on the market, according to Yann LeCun, Facebook's (FB) chief AI scientist. While the company is already creating its own custom ASIC (application-specific integrated circuit) chip, the idea is to provide faster computing that Facebook (needs in order to achieve new AI breakthroughs including digital assistants imbued with enough "common sense."

Extending a global effort to bring tech giants into the tax net, New Zealand plans to update its laws so it can tax revenue earned by digital firms like Google (GOOG, GOOGL), Facebook (FB) and Amazon (AMZN). The proposed digital services tax (DST) would tax multinational online companies at about 2 or 3 percent on the revenue they generate in New Zealand. A number of other countries including the U.K., Spain, Italy, France, Austria, Australia and India have enacted or already announced plans for a DST.