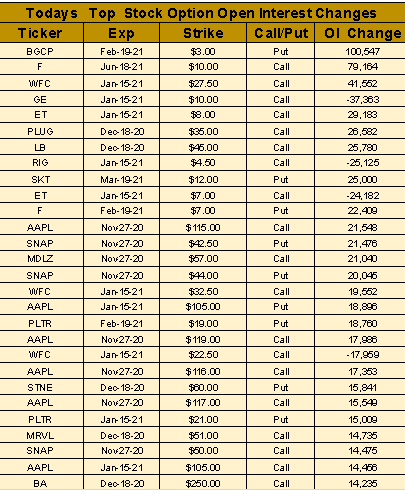 This is a Major *potential* positive development and could lead to a year-end extension rally.

In 33 years of data history, 31 years had a similar year-end rally – and note this one looks almost identical to 2019 so far. pic.twitter.com/vpC8FqMyJ1

A familiar face and uber-dove will likely be heading up the Treasury under Joe Biden - former Federal Reserve Chair Janet Yellen. Many see Yellen as a market-friendly choice considering that she oversaw a long economic expansion with historically low interest rates and she's likely to push for further fiscal stimulus. The pick will also put an end to Wall Street's fretting over Senator Elizabeth Warren, who had pledged to clip big banks with a tighter financial policy regime. "I think this is a strong sign that Biden will be focused on rebuilding the economy vs. pursuing aggressive regulatory policy," added Ed Mills, Washington policy analyst at Raymond James. “She will be an effective voice of more fiscal support vs. someone who was seen as a partisan." Not only is Yellen the first woman to hold the position of Fed Chair, but if she is confirmed by the Senate, she'll become the first woman to serve as Treasury Secretary.

We've had the recovery trade, the vaccine trade, now they're talking about the transition trade. Nearly three weeks since Election Day, the head of the General Services Administration has signed off on the handover process, meaning Joe Biden's team will now receive national security briefings and have access to federal funds to transition the administration. That takes some risk off the table, with S&P 500 futures climbing nearly 1% overnight, along with boosted optimism about Janet Yellen's possible nomination. President Trump is still pressing ahead with a long shot legal challenge of overturning the election results, appealing a decision in Pennsylvania that rejected claims of widespread problems with mail-in ballots, while attempting to halt officials from declaring Biden the winner of the battleground state. (13 comments)

Tesla valuation nears half a trillion

Driven by another surge in Tesla's (NASDAQ:TSLA) share price, Elon Musk's net worth soared $7.2B to $127.9B on Monday, passing Bill Gates to become the world's second-richest person. Not looking to take any cheap shots at Ford (NYSE:F), but yesterday's market cap gain for Tesla isn't all that far off from the total market cap for the Blue Oval of about $35B. There is plenty of general enthusiasm over the impact of a Biden administration for the EV sector and hopes that EV sales in China will accelerate with the support of Beijing. On the latter note, Wedbush Securities analyst Dan Ives thinks China presents eight to nine times the opportunity for EVs in the near term as sales in the U.S. TSLA +4.6% premarket. (202 comments)
Go Deeper: GM reverses on California emissions rules.

It was only a week ago that the CDC urged Americans not to travel or spend the holiday with people outside their household, but pandemic fatigue appears to be setting in before the holidays. More than 3M people passed through U.S. airports last weekend, according to the TSA, marking the busiest weekend since mid-March, when the coronavirus began spreading across the nation. Likewise, the American Automobile Association has forecast that 45M-50M people will take to the highways over the holiday, compared with 55M in 2019. New coronavirus cases in the U.S. have surged to all-time highs, averaging more than 170,000 per day, and deaths have soared to over 1,500 a day, the highest level since the spring. Premarket: American Airlines (AAL +7.2%), United (UAL +4.2%), Southwest (LUV +3.6%), Delta (DAL +3.4%), Carnival (CCL +6.9%), Norwegian Cruise Line (NCLH +4.8%), Royal Caribbean (RCL +4.2%).

Investors are still sizing up the COVID-19 vaccine developed by the University of Oxford and AstraZeneca (NASDAQ:AZN), with shares of the latter falling 1% yesterday before recovering the ground in AH trading. The vaccine can be stored at refrigerator temperatures and is much cheaper ($3-$4 per dose) than jabs from rivals Pfizer (NYSE:PFE) and Moderna (NASDAQ:MRNA), offering hope for the developing world. More bang for your buck... Interim trial results also suggested that those that use less of the vaccine (a dose and half vs. two doses) will have more protection with an efficacy of 90% (compared to 70% for the other regimen). Still, SVB Leerink analyst Geoffrey Porges called the results "embellished," saying they were from a "relatively small" group of volunteers and the shot would never be licensed in the U.S. However, the rollout of the Astra-Oxford jab could begin next month in the U.K., according to Health Secretary Matt Hancock, along with a vaccine from Pfizer, though both need to be assessed by the U.K. health regulator before they can be administered to the public.

Bitcoin (BTC-USD) has skyrocketed 160% since January, supported by strong institutional demand as well as scarcity, with payment companies like Square and PayPal buying it on behalf of customers. The currency touched $19,000 overnight, within sight of its all-time peak of just under $20,000 hit in December 2017. "I have seen bitcoin go up 10X, 20X, 30X in a year. So going up 5X is not a big deal," said Brian Estes, chief investment officer at hedge fund Off the Chain Capital. He predicts the cryptocurrency could hit between $100,000 and $288,000 by end-2021, based on a model that utilizes the stock-to-flow ratio measuring the scarcity of commodities like gold. In a note last week, Citi technical analyst Tom Fitzpatrick added that Bitcoin could climb as high as $318,000 by the end of next year, citing its limited supply, ease of movement across borders and opaque ownership. (14 comments)

McCormick (NYSE:MKC) is moving over the bottle of Frank's as it eyes a new hot sauce. The seasonings company has agreed to a deal with L Catterton, the private-equity firm that has owned Cholula since 2019, that would value the brand at around $800M. McCormick already acquired Frank's RedHot, best known for its buffalo wing sauce, back in 2017, as consumers look for low calorie condiments and millennials flock to spicy flavors. In fact, retail sales of hot sauces in the U.S., including Sriracha and Tabasco, are on track to near $1B this year, which would be just shy of ketchup sales, according to estimates from Euromonitor.

A reported meeting between Bibi Netanyahu and Crown Prince Mohammed bin Salman this week may lay the groundwork for business development in the Middle East amid a U.S. push to normalize ties between the longtime foes. Google (GOOG, GOOGL) is looking to open a new corridor for global internet traffic that would link India to Europe via Israel and Saudi Arabia. With a capacity of hundreds of terabits per second, the fiber-optic network would help the tech giant roll out data centers globally and catch up to rivals Microsoft (NASDAQ:MSFT) and Amazon (NASDAQ:AMZN) in on-demand cloud computing. Israel has recently formalized government ties with the U.A.E., Bahrain and Sudan, and Israeli and American officials have said other such deals are underway.

GM (NYSE:GM) air bag problem could cost more than $1B.

Merck (NYSE:MRK) splashes out on a deal for severe COVID infection therapy.

Black Friday challenge: Finding a PlayStation or Xbox in stock.