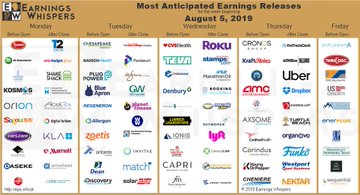 Wall Street is pointing to positive territory for the session ahead, with Dow and S&P 500 futures up 0.8% and the Nasdaq ahead by 1%, following the worst trading day of 2019. Traders may have been buoyed after the People's Bank of China took steps to stabilize the yuan, setting the currency's reference point higher than the key 7 per dollar level. Late Monday, the U.S. Treasury Department labeled China a currency manipulator for the first time since 1994, opening the door to new sanctions and ratcheting up already high tensions.
Go deeper: 'Round 3 Of The Tariff Wars' by Calafia Beach Pundit.

The intensifying U.S.-China trade war still pushed the Shanghai Composite down 1.6% overnight as Beijing confirmed its suspension of U.S. agricultural product purchases in response to new American tariffs. China, one of the largest buyers of U.S. agriculture, also did "not rule out" duties on newly purchased agricultural goods after August 3. China's official Communist Party newspaper further said that the U.S. was "deliberately destroying international order" and holding its own citizens to ransom.
Go deeper: Global investing analysis of China vs. peers.

The four living former Federal Reserve chairs have banded together to emphasize the importance of a Fed chair who's "permitted to act independently and in the best interests of the economy, free of short-term political pressures and, in particular, without the threat of removal or demotion," in an Op-Ed piece in the WSJ. Even the perception that monetary-policy decisions are politically motivated "can undermine public confidence that the central bank is acting in the best interest of the economy," wrote Paul Volcker, Alan Greenspan, Ben Bernanke and Janet Yellen. "This can lead to worse economic performance in the long run, including higher inflation and slower growth."

Britain is joining the U.S. in forming an international mission to protect shipping through the Strait of Hormuz from Iranian threats after struggling to build a European maritime coalition to safeguard ships in the region. The U.K. said details of the cooperation had yet to be completed, but that it had offered to lead one of the mission's maritime task groups. A third of the world's seaborne oil is transported through the strait.

Crude traded above $55/bbl after the Trump administration imposed a total economic embargo against the government of Venezuela, freezing all its U.S. assets and sharply escalating a campaign aimed at removing President Maduro from power. The executive order goes well beyond the sanctions imposed in recent months against Venezuela's state-run oil company PDVSA and the country's financial sector, as well as measures against dozens of Venezuelan officials and entities.
Go deeper: Latest energy news.

Barneys, a nearly century-old icon of New York retail, has filed for bankruptcy protection and secured a $75M financing package to support a sale process that will see the company close 15 of its 22 locations. It's just one of many department stores that's struggling as shoppers buy online or from brands directly. Nordstrom (NYSE:JWN) is trading nearly $20 a share lower than a $50/share buyout offer it rejected two years ago as too low, Saks-owner Hudson's Bay (OTCPK:HBAYF) is considering going private after its stock fell nearly 50% in the year through June, while shares of Macy's (NYSE:M) are down 34% YTD.
Go deeper: Compare retail names side by side.

Jeff Bezos sold roughly $2.8B worth of Amazon (NASDAQ:AMZN) shares in the past week, prior to losing $3.4B on Monday as shares of his online retailer tumbled 3.2%. Bezos hasn't provided an explanation as to why he's accelerating stock sales, but he's currently selling about $1B in Amazon stock each year to fund his space exploration company, Blue Origin, and is also deploying capital for the "Day One Fund," which was announced in 2018 to help homeless families and create preschools.

Tencent in talks for Universal Music

Tencent (OTCPK:TCEHY) is negotiating a €3B deal with Vivendi (OTCPK:VIVHY) to buy 10% of Universal Music, one of the world's largest music labels. Tencent is known primarily for its gaming and social network business - it owns China's powerful WeChat platform, which has 900M daily users. But the company also has its own music unit, Tencent Music Entertainment (NYSE:TME), which raised more than $1B in an IPO late last year that valued the division overall at $21.3B.
Go deeper: Sell Side has Tencent Music at Outperform.

Videogame makers down, gun stocks up

Videogame maker shares came under heavy selling pressure on Monday after President Trump referenced the industry after two mass shootings that shook the country over the weekend. "We must stop the glorification of violence in our society," he said during a press briefing. "This includes the gruesome and grisly video games that are now commonplace." Activision Blizzard (NASDAQ:ATVI) tumbled 6% on the news, while Electronic Arts (NASDAQ:EA) dropped 4.6% and Take-Two (NASDAQ:TTWO) slipped over 5%. Firearm stocks saw gains on gun control fears, however, with American Outdoor Brands (NASDAQ:AOBC) and Vista Outdoor (NYSE:VSTO) rising over 2%.